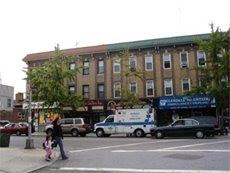 City Planning Commissioner Amanda Burden began a public review this week for a proposed rezoning of 300 blocks in the Middle Village, Glendale and Maspeth neighborhoods of Queens. The rezoning area is bounded by the Queens-Midtown Expressway, Woodhaven Boulevard, Forest Park, Mount Carmel Cemetery, Cypress Hills Cemetery, Fresh Pond Road and 59th Street. The proposed rezoning would require new developments to match the scale and density of surrounding houses and would prevent commercial development on residential blocks, among other changes.

Hey developers, not to worry...you'll still have the BSA to fall back on!
Posted by Queens Crapper at 12:36 AM

I'm guessing that my commercial building on a residential block that been there since about 1920 as well as others is grandfathered in?

Let the games begin. They'll rezone the areas, but if Bloomburg wants your property, he'll take it by eminent domain and will do what he wants with it.

The Queens-Midtown Expressway? Isn't that the LIE? I kind of like the new name.

"Hey developers, not to worry...you'll still have the BSA to fall back on!"

That's like closing the barn door after the horse gets out!

They have to.
I was in Ridgewood and didnt know where I was on some streets.
A gray cement barricks of 12 units on the corner of Summerfield and Seneca takes one of the prizes.
Was an old 1920"s single family with the walk up steps & big yard there. The old lady German lady died and her kids sold it to this scumbag that immeadietly claimed "rotten timbers" I have to knock it down"
He had drilled holes in the roof, broke the basement windows out then finally torched it.
Nobody from the city would respond, as this owner destroyed this house wile renting the yard as 6 cars of parking.

Its built right to the sidewalk.
The next street is now all devalued Stier houses with no place to park.
My old house lost over $200,000 in value under this scumbag mayors tweeding & devoloping.

watch out schools will be next!

Good god i hope so.

Near me in glendale, there was a old cardboard warehouse on 67th Pl and 70th ave that was replaced by several three-story townhouses in that lovely yellow brick and Dryvit.

In fact this guy got on the news for making an illegal curb-cut AFTER the place got the C-of-O to add an extra driveway (and taking away streeparking in the process).

On asthetics alone we prefer the warehouse.

They also built a similar 3-story building (yellow bricks and all) on Otto and 68th Pl. Funny, its on the site of a 1-family home in an area where zoning (R4-1) says 2-family dwellings max only, and yet there are 3 sets of meters, 3 mailboxes, and 3 doorbells on the front of the place. Gee, i wonder why that is?