Astoria has another blackout! 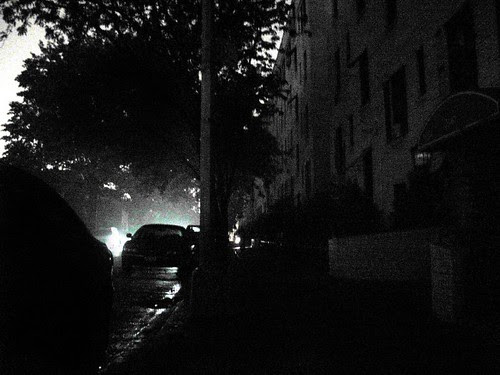 It was déjà vu all over again for a block of Astoria residents yesterday after an outage left scores of residents without power on one of the warmest days of the year.

The neighborhood, hard hit during a days-long power outage in the summer of 2006, got a little taste of power trouble starting at 11:45 a.m. yesterday when a smoldering service box containing electric cables sent carbon monoxide into nearby homes and severed power.

About 40 people were evacuated and 25 customers lost power. A customer represents one meter, so potentially hundreds of people were left powerless. The incident happened on Crescent Street, between 23rd and 24th avenues. Power was restored by evening, said Chris Olert, a utility spokesman.

The cause of the outage is under investigation.

Interesting how they will evacuate for carbon monoxide (a gas) but not natural gas.

Photo from mercurialn on Flickr
Posted by Queens Crapper at 7:55 PM

Nothing is more annoying than having blackouts in the neighborhood that provides the bulk of electric power for the rest of the city.

Talk about the cobbler's children having no shoes.

Could the root just be the numerous illegal tenants and illegal aliens who never get counted for purposes of infrastructure planning?

Yes it could be the illegal tenants using up power but are not accounted for in surveys, census, etc. I also wonder if no one is considering that a lot of buildings in Western Queens, and throughout the city, are OLD. Unless you or your building owner have done upgrades, your building may not really be suited for the amount of STUFF we plug in today.

My old landlord didn't upgrade the electrical service until we almost had a fire (and upon pressing for a proper inspection by the city, they made him fix it, but I practically had to tell the inspectors what was wrong!)

Let's run an extension cord over to the Vallone residence the next time there's a blackout.

He always seem to have power.

And I'm not just speaking of the political variety.

Frayed wiring and over development.

Not a good combination.

Add to that maybe 15 illegals living in a basement cooking on hotplates and "poof" there goes the grid.

Well if it's all true about illegals living in basements in Astoria, when they do have blackouts i don't want to see them crying on t.v durning the summer. I'll be in my nice cool air condition home, i have a legal two but use it as a one. That's the damn problem greedy landlords, enough already and the city should crack down on them.

Look for Eric Gioia to be in the news; I bet he's preparing his latest attack on Con Ed right now, as it would not be politically correct to talk about the real problem of too many people crowded into a small space and not enough power.

Block after block of Greek and Arab cafes with walls removed open to the world.

Their little minds might be closed, but they are open to air conditioning the sidewalk.

They don't take anything serious in that neighborhood as all the thinking is done for them.

All you need to do is ask them about the cafes, and the mumble something about Con Ed, just what the pol told them to say..

Got thrown off astorians.com cause I challenged them to think was the fault stemmed from an all but official policy in that community for absentee landlords to illegally convert buildings.

Why do you worry about them all the time - they are out to lunch.

All they do is belleyache about the one decent venue in that community: Bohemian Hall.

But they go apeshit over a taco truck.