'Fat Boy' gets no respect 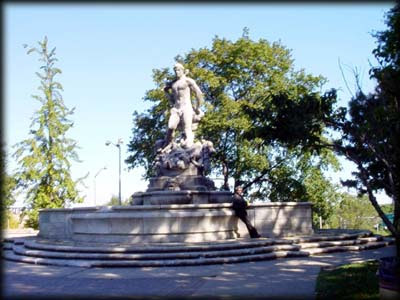 That the statue is in disrepair is above dispute: It's dirty, and its marble is crumbling. The argument is over whether to do anything about it.

The district manager of Queens Community Board 9, Mary Ann Carey, wants the statue restored. In June, she sent letters to Mayor Bloomberg and Deputy Mayor Patricia Harris, as well as figures in the New York art world, asking for support. At their June meeting, the members of the Kew Gardens Civic Association voted overwhelmingly in support of restoring the statue. In recent weeks, the president of the Fine Arts Federation of New York — a consortium of arts groups including the National Sculpture Society, the Municipal Art Society, and the Architectural League of New York — Tomas Rossant, sent letters to the New York City Parks Commissioner, Adrian Benepe, and Queens Borough President Helen Marshall, advocating that the sculpture be conserved.

Ms. Marshall, however, is no fan of "Fat Boy," as the statue's detractors call it. She has called the statue sexist and said she has no interest in restoring it — in fact, she wishes it were somewhere else. Mr. Benepe, meanwhile, says that he would like to see the statue restored but that the Parks Department doesn't have the money — between $1 million and $2 million, according to a Department estimate — required to both restore the marble and make its fountain function again.

Please go back and reread the post about the Staten Island diner so you can see how Benepe and Marshall managed to prove our last point...

Photo from NYC Parks Department
Posted by Queens Crapper at 3:21 AM

The "learned" opinion of Mr. Finkelpearl
(director of the Queens Museum, perhaps a 3rd rate art institution at best....ensconced in a 4th rate patronage job)
has no particular validity whatsoever !

He says that "Civic Virtue" is old and looks fine just the way it is (typical of a Queens Philistine feigning an art pedigree) !

#1 We are talking about stabilizing the cracking disintegrating marble !

#2 Instead of behaving like a clubhouse FOOL and playing follow the leading opinions,, he should at least be demanding the statue's physical integrity be attended to PDQ !

#3 Ms. Marshall hasn't done much of a job as borough president and should refrain from making a bigger ass of herself by expressing her rather limited artistic opinions !

#4 After it's stabilized if plump butt Marshall can't abide looking at "fat boy's" ass (she should use a mirror to view her own)....perhaps it can be moved to a more suitable location !

I guess that a statue reminding borough hall
(the long time home of corruption)
of the necessity of virtue causes Helen and her staff a certain degree of embarrassment and indigestion !

Suggestion.....let's commission a bronze of Donald Manes in its place.....to be entitled "County Crook" !

When handed a lemon, make lemonade.

There is a famous statue and tourist attraction in Brussels, Belgium known as the Mannekin-Pis (official website: www.mannekin-pis.com). The legend surrounding it has a little boy urinating on a gunpowder charge, extinguishing the flame, and saving the city. Today, costumes have been made, and this statue is periodically attired in new raiment for the delight of all - visitors and residents! There's even a Mannekin-Pis Museum where the costumes etc are housed.

My suggestion: Make the "Fat Boy" the Mannekin-Pis of Queens...Complete with custume changes...Maybe one change per month to reflect the seasonal vicissitudes?...What a hoot!...It surely would put Qveensborough County "on the map"...Can you imagine Fat Boy wearing a top hat, a Santa Claus hat, a hula skirt...we could even dress the maidens at his feet...Hey Helen Marshall, I betcha Markowitz in Brooklyn would do it!

How about putting a Bloomberg mask on his face and put the names of each of the outer boroughs on the women he is standing on top of?

I passed by the statue today. It can definitely be restored, but why wait until it goes to pot? The Parks Dept & Marshall does have the necessary funding. Adrian Benepe had the $20,000 for transporting the Victory Diner in RI, but can't save a monument that is part of a park?

And Marshall, it is NOT whether YOU favor the restoration of the Civic Virtue statue, but it is your obligation to work with your constituents & carry out their desires. Are you abandoning your role as usual, or does another photo-op sound better??? Your reflection is nothing but Shame, Shame, Shame!

How often does Benepe use the "We don't have the money" excuse as a way of defaulting on his duty to the people of Queens? This excuse is used on the Tent of Tomorrow, St. Saviors, and the Civic Virtue statue. Benepe is like a broken record.

Mazeartist: Benepe is indeed a broken record! Who's he foolin'? I wish that jerk would be demoted or resign from a guilty conscience. We need someone who understands what a park is all about, and doesn't interpret it as parking on the lawn.

Civic Verture is a work of art. In any other culture, works of art are usually restored and preserved.

The subject matter and critiques (especially from politicians and city employees)should not influence the need for restoration of this work of art.

I agreee, it is a work of art and should be restored. According to the article, it was commissioned by "the city" which means tax payers dollars financed it. The people of the City of New York own this statue. The owners should decide the fate of this work of art.

And adjacent to it let's commission
a new sculpture entitled "Civic Sellout"....
depicting an allegorical group of citizens (excuse my bluntness) getting the shaft from each succeeding borough president
neatly standing in a single line awaiting their turn !