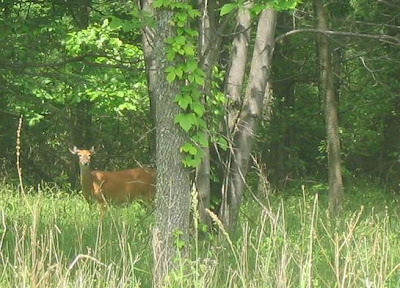 Apparently, the animal had run up the Long Island Expressway ramp that borders on the Little Neck Bay wetlands in the early morning hours of Wednesday, June 6. According to Douglaston resident [Dawn] Anatra, it headed west on 53rd Avenue, which leads back to a wild area bordering the wetlands.

She should not have been shocked, according to a spokesperson for the Parks Department, who told The Queens Courier, “There are deer in many of Queens’ Parks.”

And now, a more recent sighting:

The deer sighting in Douglaston, reported in The Queens Courier on June 14, was no fairy tale. There are two, probably a doe and her fawn, according to a Parks Department source, and they’re heading west.

Department of Transportation workers spotted two deer moving along a green space in Kew Gardens, about three weeks ago.

We've had ticks here for quite awhile. My dog (may he rest in peace) came home with one after a walk back in the late 80s.

Maybe we've got a lot in common with our animal brothers and sisters (as St. Francis might conclude) !

Where do we go after we're choked out of our once tree lined streets ? !!!

G-d bless those deer.....
and I hope that they can be safely transported to a more hospitable new home !

And I hope, "Ken", that you will do more than talk about deer ticks !

The clock is ticking !

Up-zoning and over building is just around the corner !

Ticks are no laughing matter, especially ones carrying incurable lyme disease, which can ruin a person's health for life. Any area where they've been sighted should have warning signs posted about to protect people and their pets.

As to deer I've got no personal gripes against them. If I had my way I'd give them back most of their habitat, by converting overdeveloped communities, like yours, back into forests again.

Read the early accounts of Queens history and you'll see what beautiful natural treasures we had here. now all we have is concrete, ugly buildings and mosquitoes. Ah, progress!

Don't know how to tell you this Ken but, despite the tick's name, mice are one of its primary hosts. I suspect that Queens had a mouse or two in its fields and lots long before the deer showed up.

Take it from someone who's lived in deer country all of his life, and spends a lot of time outdoors. The threat of Lyme disease is overblown. A minority of the ticks carry the disease, even those who carry it don't spread it that quickly, and unless you ignore the symptoms, treatment is a simple regime of antibiotics. Ticks--and treatments for Lyme--are a fact of life in many of NYC's suburbs, where many entire families carry the Lyme antibodies. I pick ticks off of me just about every weekend during hunting season, and they haven't managed to infect me yet.

Bottom line is that you take a bigger risk driving to the park (or walking across a road to get there) than you do walking through it, no matter how many ticks may reside therein.

Celebrate the fact that deer brought some life back to the City and accept the ticks as the price of taking this small step away from urban desolation.

I'll definitely have to check out some early accounts of Queens history, like you suggest. Life must've been great back then with all that open space.

For besides all the concrete and ugly buildings we have to deal with, nowadays, we're also piled up on top of one another, which isn't really so bad. Residents in Queens are friendly and nice, for the most part...

Let's all chip in and buy "Ken" a "Barbie" doll.....sounds like he needs some cuddle time out !

meet me somewhere and we'll settle this.
time:
place:

Suggestions for the posters' "rendez-vous":

1.on the NYS Pavillion Texaco map
2.behind the Fat Boy statue on QBlvd
3.on the sidewalk in front of Danny Boys Pub & Restaurant

what a junior "thug" you are !

Go "settle" yourself down and play by yourself (or with yourself) for awhile !

I'd be cautious about posting what might be considered an online threat to a poster .

Come on ....enough of this from both of you who insist on sparring with words !

I say control the tick population by opening Big Game Hunting in Queens!

I suppose you're right, Reign.

Sparring with words, though, is something I'm just no good at. Everybody has got their talents and issuing witty and cleverly constructed insults ain't mine.

So I guess I've got no business blogging, which is unfortunate. Some really good and thought provoking points get raised on this site, along with some awesome photos.

This one of a deer is a gem. Before I go I think I'll cut and paste it on to my desktop, along with some other posted stuff, to look back upon.

Does that include open season on "Tony c" ?

Now, now fellas.....how about a tranquilizing dart and relocate those deer ?

finish your steak
put on your leather shoes/coat/belt
and keep dreaming that the meat you buy in a pretty package grows on trees.

If we had open season on hypocrites - there would not be enough bullets.

I DON'T EAT MAMMALS.......really !
(I'm practically a vegetarian) wear sneakers and man made materials (really good quality leather is usually unavailable or far too costly for me) and I have rescued injured animals of all kinds.... often at great expense.

So let's not split hairs in the hypocrisy department.

You were hunting for a good laugh and I squeezed off a verbal round too quickly.

Sorry for creasing you .

I was also using humor to make a point.

I promise that one day scientist will announce that they have discovered that plants feel and have a soul.