Tyler vs. the BSA 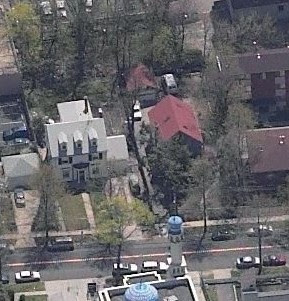 Board of Standards and Appeals strikes again! A civic member called me the other night to report the cutting down of several large beautiful trees in the backyard of a property (141-48 33rd Ave) we’ve been watching. I went and took a look. Sadly, the property had been cleared of all trees. I counted 13 large beautiful trees had been cut down. This prompted me to ask if the BSA variance they were seeking had been approved. Yes, was the answer. Another one bites the dust.

This application had been voted down twice by Community Board 7; The North Flushing Civic Association had voted “No”, and local electeds had said “No”. A letter had even been sent to BSA requesting them not to approve the application by our Senator, Toby Stavisky. All to no avail. Result? You have five appointed BSA members who report to no one cramming this decision down our throats. Like it or not. There is no community representation or borough representation at BSA at all.

Time and time again we’ve witnessed the same scenario – BSA approved requests that were voted “No” by the local Community Boards, civic associations, elected officials, and local residents. In northern Queens, some of the worst were when they allowed an illegally created parking lot to remain, a religious-use major expansion on a one-family property that dwarfs the neighboring houses, a huge health spa in a inappropriate area in College Point, and another mega drugstore on a busy corner where hardly any parking exists. The area already has several other big drugstores.

The latest BSA approval disaster for us in North Flushing is the approval to put a six-story apartment building on a small landlocked piece of R-6 zoned property where the only entrance is through an R-2 zoned lot. This small piece of R-6 land should have been purchased by the apartments on the East and South side of it, and kept as a nice tree forested buffer zone, but it wasn’t. The only entrance to this landlocked property is through the R-2 zone, which contains a nice colonial house and backyard. Now the house is going to be knocked down and converted into a driveway to get to this new apartment building. Another nice home gone from our precious residential area, and converted into something we don’t need. So the neighbors on either side will now have a driveway as their new neighbor. Some precedent! It’s also a time when we are supposed to be saving the trees because of the many benefits they pass on to local residents.

Our communities are defenseless against the BSA. Once they’ve made a decision, the only thing the community can do is hire a lawyer and submit an article 78 which doesn’t mean you’ll win. Unfortunately, most civic groups don’t have the money to mount even a minimal fight against the BSA, so they lose because they can’t afford to fight. The Community Board’s decision is only advisory, so it is not surprising that many applicants bypass them altogether and go directly to BSA. Or when they do come to Community Board meetings they act defiantly about changes to their plans knowing that the real decision lies at BSA. As a result, you have BSA doing ad hoc planning where zoning laws get overlooked to suit the builder’s need.

When the Board of Estimate was eliminated and replaced by the BSA, the appeals process was conveniently left out. We need changes at the BSA, and we, the people who live here, need an oversight process to protect us. There is no “one-size-fits-all” BSA decision-making process that serves our city well. It is unfair the use the same criteria for a street corner in Brooklyn, that you would use for an entirely different neighborhood in Queens. Each borough, each neighborhood, each block, and each property is unique. You must take into account the specific site, the local neighborhood, the surroundings, saturation, and mostly the needs and wishes of those who live there. The residents who are impacted have to live there long after the BSA decisions are made.

City Planning doesn’t really develop plans for our city; they only react to plans by builders. We hear the term “community-based planning” being bantered around by City Officials today. Many cities around the country have embraced this concept, allowing the local communities to have a say in their own future. We urge this concept to be enacted in our city too. We are all stakeholders in our future and we should have a say in our development.

Once again, courageous councilman Tony Avella has come to the aid of the community and sought to challenge the BSA monster the city has created by his intro No. 261 to create a BSA appeals process; intro No. 262 to require a BSA two-thirds majority decision be required, and intro No. 263 expanding BSA membership to 13 members, to include a member from the borough president, the Public Advocate, the Comptroller, and the City Council. Changes to BSA are long overdue. We wholeheartedly support these vital changes to existing law. Get on board. Get some say in your future.

This is a good one to go after our elected officials - apply pressure today!

Also, perhaps all those reporters that are giving extensive, in depth coverage on Pinky's reputation (listening Dee and Michael?) might tear themselves away from our answer to 'Queens Idol' or 'Pinky Hilton' and spend their time covering something that the Queens public finds useful.

When it comes to trees being cut down Bloomberg really should intervene. I mean the guy wants to improve the environment by planting a million trees throughout the boroughs, in the coming decade, but what good will that do if 999,999 existing ones are cut down beforehand. It makes no sense.

Bloomberg's idea of tree planting is to put cute little seedlings in decorative concrete planters all over the city sponsored by the various BIDs with their logos affixed to them!

Introducing bills is like farting for Council Members -- they all can do it at will. I'll be impressed when Avella passes his bills!

When Speaker Quinn stops acting like an asshole and lets Avella's bills come to a vote without interfering, his bills will become law. Until Clairol Christine knocks it off, the city will suffer.

How many bills has Gallagher introduced? We all know he is good at farting with all the beer he drinks.

Christine Quinn won't let me pass my bills (cry, sob, cry). Excuses are like butt holes -- everyone has one. If Avella wants some respect he needs to produce -- otherwise he's just a loud mouth with a of opinions.

Same goes for Pinky. He should really come out from hiding behind his door and get a bill passed. And not one about newsracks either.

How about a ban on metal baseball bats. Think how many lives it will effect. Oh, wait, that's been done already by another Ognibene spawned genius.

Never underestimate the power of a single "fart" within chambers to get everyones' attention !

That's merely the begining of the wave of voters demanding that their "public servants" (like Quinn) stop blocking the laws that they want passed !

And you voters out there....learn to use the power of your little finger in the voting booth when you're making the critical decision of flipping the lever yea or nay for a candidate.

Ms. Elizabeth Jenks owned the house at 141-38 33rd Avenue from the time it was built until she died in the early 1980’s. That was such a lovely, elegant home. She was a grand and elegant lady, “olde Flushing” stock, like Margaret Carman. I remember an older civic woman telling me that Ms. Jenks grandfather was John Holley Clark of Flushing High School fame. An elected official used to have an office in that house. I think it was Julia Harrison, but I'm not sure. It was a long, long time ago. Back when 33rd Avenue was lined with very large trees and large one family homes. What a shame, the backyard was like a forest.