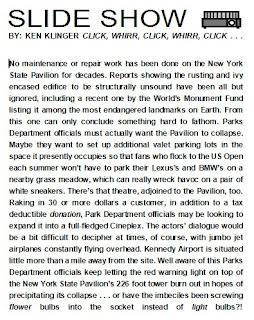 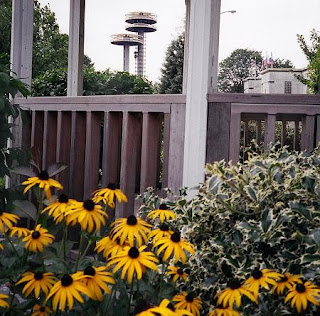 I would love to see it restored, (so does the many who work in the theater.
People need to understand how this thing was built !!
Donald Trump himself was contacted he wanted no part of it.
It must be stabilized first, a task that will cost millions just to prevent it from killing workers.
Now who has the 80 million dollars ?

Hello everyone! Just want to clear up a couple of misconceptions.

Misconception #1 - The NYSP is abandoned. Not true. About a quarter of it is essentially abandoned in the sense that it is unsafe to enter. The remainder of the Pavillion is utilized by the Parks Department and Queens Theatre In The Park. The new "concrete path" allows the theatre's production department to roll heavy items from the Pavilion to one of the theatre's temporary entrances (don't worry, we don't roll things across the map).

Misconception #2 - The wooden gates are a sign that the city/state doesn't care about the Pavilion IT's THE MAYOR and people employed by him WHO REFUSE!!!
I can't really address this much more --

The chain link fence gate between the theatre and the pavilion and cheesy link/wooden gate are there because they are attached to a sections of the pavilion that are rapidly settling (it was build on an ash dum). Any metal gate would be solidly jammed shut within a couple of months. Yes, you can get in by squeezing thru those gates if you're skinny enough, just remember that by doing so you're putting extra strain on a wall that is already weak. If you claim to love the pavilion I'd hope you wouldn't want to risk damaging it further, or pulling a cinderblock wall over on yourself...

Misconception #3
- Theatre employees that throw people out of the pavilion are "mean" - Sorry, but several reasons for employees asking people to leave:

1) That's what the Parks Department has asked us to do. We can't afford to lose access to the pavilion. Officially, nobody is supposed to be in there other than theater employees, Parks Department people, and the folks working on panels of the map restoration.

2)We can't bear the liability if someone gets hurt. Much of the pavilion is indeed extremely unsafe. The Queens Theatre in the park employees are there to do their jobs, not keep an eye on visitors. In the last couple people have tried to climb stairs that won't support a raccoon much less a human being, stop someone from trying to pry open a door that would have caused the collapse of the wall surrounding it, and stopped someone from trying to steal a chunk of the map of New York which *partly is* under restoration.

We're not trying to be mean, we just don't want anyone getting hurt, and we can't just stand around while someone attempts to steal things.

3)Some people are just plain rude. People have been thrown out screaming "I'm a taxpayer" song and dance, etc tell workers to go F themselves. As I said above, the official line is nobody is supposed to be in there except Parks Department, theatre, and map restoration personnel. Try being civil, you might be pleasantly surprised.

Bottom line: We all love the Pavilion too like QUEENS CRAP !

Wow, the pavillion is less than a mile from JFK?

I wonder what other facts the article gets wrong

It's obvious the contributor meant LaGuardia instead of JFK.

Yes, it's obvious they meant LGA, but it's still a fact mistake - what OTHER mistakes have they made

You are correct - and I'll admit my mistake - but then again, I don't have an editor

I have mixed feelings on the Pavilion. I'd LOVE to see it fixed up and reopened (I can remember getting a tour inside in the 70s, but even then, it was to risky to climb the towers) - I can also remember the US Pavilion

The problem is, I also know that the whole structure was built on temporary pilings, and was never meant to last more than 2 years (and then be torn down), and I realize the kind of MONEY it'll take to restore

The question is - is that the BEST place to spend our money? I'd personally say it's better than say, the Latimer (spelling?) house (TOTAL waste IMHO, even if my mother in law was VERY involved in that). I also understand that there is a total difference in the cost

I did a google search on Lewis Latimer and it said that he "invented water closet for railroad cars and the electric lamp with an inexpensive carbon filament and a threaded wooden socket for light..."

In "light" of this I'd say that any money spent on the restoration of his Queens home was definitely well spent. As to the Pavilion I have heard some rather inflated figures about how much would have to be invested for it to be restored. It's really difficult to believe it would actually cost that much, and if it would the construction industry sure has got some racket going. I mean for 80 million smackers you'd think a whole town could be erected.

PS If Latimer were still around I bet he could fix that light bulb on top of the Pavilion so it wouldn't keep burning out. But now that I'm back on the subject answer me this: Wouldn't it be neat to be able to ascend to the top of it again and be able to get a bird's eye view of the borough? I'd be willing to shell out 10-15 dollars for the privilege and so would many others, which would partially pay for the cost of the restoration.

PPS In any event, though, something urgently needs to be done about the rickety Pavilion before it topples down and winds up killing people. If it lands on the theatre, on the night of a performance, 100's would die.

I really DO believe we need a museum for Latimer, BUT I've seen the house - it's nothing special. For what they paid to MOVE the house (it was going to be torn down) making it semi ADA compliant, etc, they could have built a better museum, where we would have learned more about him..