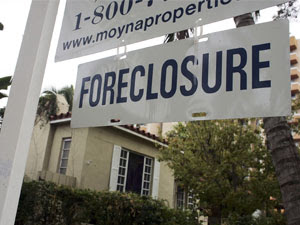 Queens experienced the largest jump in foreclosures among the five boroughs during the second quarter, according to data released by research firm PropertyShark.com.

This is because Queens has the most lending predators and subprime mortgage victims. But someone is doing something to curtail that:

Vans distribute advice to avoid mortgage scams
Posted by Queens Crapper at 7:33 AM

Yet another example of the urban deterioration of Queens. Every other boro and suburb is improving from the 70s and 80s (even Newark is struggling to get better) as Queens quietly sinks lower and lower.

Tottering old ladies and gents living in the past (and living in a fog) surpress any opportunity for new blood and change (and give away the shop - and boro- for a song.)

As Rome burns they idle away the time without the foggiest idea what to do except giving each other little plaques at rubber chicken events (and unlike real news, these are covered extensively and breathlessly in the local press) that drone far far far into the night.

Even with a complete collapse of Queens housing prices we can't afford to buy here.

Two City Salaries is not enough to buy in our part of Queens.

I hate to say it, but I'm not as afraid of an economic collapse as I am of losing my apartment.

There's also a huge amount of FRAUD in Queens-particularly with purchases of homes at foreclosure, phony flips and pumping of prices, draining of the "equity" through HELOCS-and then the scammers let the whole thing drop and let the property go back into foreclosure, where it goes around again....there are too many careless banks, criminal real estate lawyers and crafty crooks who know this game

Let's see which real estate moguls are going to snap up these foreclosures (at bargain rates) tear 'em down and build whatever monstrosities they might have in mind !

This is "urban renewal" ("clear cutting" neighborhoods) with a new creative twist !

I wonder if all those sub-prime predatory lenders were in cahoots (in the first place) with the real estate conglomerates that will be buying all these properties up ? !!!

What is really creepy is the "ads by Google" at the top of the Forgotten NY page about St. Saviours about foreclosed properties in New York City, Parker Towers condos (no fees!) and the like - at least when I went to read it (I realize Kevin has no control over that).