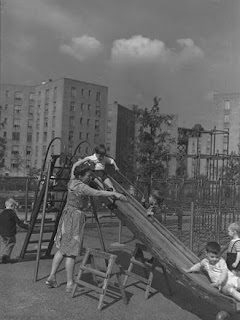 Crappy buildings are springing up everywhere in Queens these days, but when did this trend begin? You can find examples from almost any period, but perhaps the finger can be pointed at the Queensbridge Houses, the massive and ugly housing project visible from the F Train at the 21st Street-Queensbridge St. subway stop.

This would be a strong candidate as the birthplace of modern Queens Crap. A staggering 96 buildings containing 3,142 apartments, the Queensbridge Houses were aimed at lower-income residents. As such, they were built on the cheap, to the extent that elevators were designed to only stop at the 1st, 3rd and 5th floors of the 6-floor buildings! The ugly grey Y-shaped buildings have been an eyesore ever since they opened in 1939. 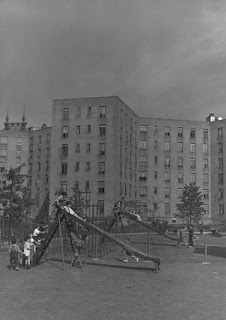 As these 1942 photos from the Library of Congress attest, the original racial makeup of Queensbridge was overwhelmingly caucasian. According to Wikipedia, though, during the 1950s, the management changed the racial balance of Queensbridge by transferring all families whose income was more than $3,000/year, a majority of whom were caucasian, to middle-income housing projects, and replacing most of these tenants with African-American and latino families. 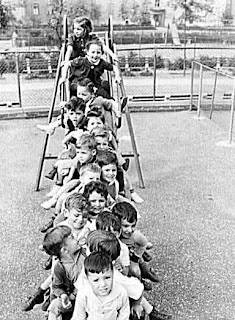 In recent years, the Queensbridge Houses have become a hothouse of rap music, with well-known artists including Def Jam and Nas originally from the project, according to Wikipedia.

Public housing doesn't have to be ugly, but the Queensbridge Houses certainly are.

- Bob Bobster
Posted by Queens Crapper at 12:00 AM

It's fitting that these crappy buildings that the city slapped together are shaped like a "Y" because anyone who sees them is left wondering WHY?!

These projects may be fugly and dangerous, but consider the long waiting list for these projects! People are so desperate to live in this city, they don't care if it's a brick box with windows!

Part of the great push by mysterious Rev Taylor (supported by all those polticians) to open a bank nearby was a step to get folks a credit history so they can get mortages and move out!

Should be interesting to see how they can empty that place - I believe that public housing is on long term leases.

What are they going to say at Queensbridge when they find Suna (Silvercup) jobs don't pan out, or he gives them stuff like watchmen and the like (but he does give them a lot of traffic).

What are they going to say at Queensbridge when they find Suna(Silvercup) blocks their sunlight and reflects all the noise of the bridge on their complex?

What are they going to say at Queensbridge when they find Suna (Silvercup) blocks their waterfront access promise with a fence - well hell its only 40 feet wide between building and river anyways.

What are they going to say at Queensbridge when they find Suna (Silvercup) may have sought a photo op of their approval at a community board meeting (courtesy of a good hot dog roast supposedly) then excludes affordable housing off site.

Please don't tell me the complainers are against the Silvercup project on the river.

The way some people in their 20s choose to live nowadays (i.e. cramped together in LIC & Huinters Point illegal "artist" studio/communes) at least these projects are fireproof !

Modify those elevators to stop on all floors.....put in some window boxes with flowers.....poof......you've converted the old Queensbridge into luxury housing !

"Please don't tell me the complainers are against the Silvercup project on the river."

Silvercup? First of all, its Suna Equities - it has nothing to do with wholesome bread and the studios are a sideshow.

Against it? You becha, a lot of people are angry that the waterfront that is parkland elsewhere is being taking up by a private developer in Queens.

Want to give it a public vote?

A lot of people in Queensview are upset about that affordable housing stunt the pulled on us. We were in favor cuase we thought there would be apartments for us.

Hey Stu, you want the niggas out of sight?

I guess we can expect the same for jobs?

Oh everyone can stop with the Suna bashing...should we just let ConEd have that land. And, believe, me, they'd take it over in a second and put even more power plants and not just temporary ones.

Most of Queens waterfront is either power plants or private industrial wasteland...let Suna come in. And he has said the waterfront will be accessible to everyone.

Some people just want LIC to be garbage everywhere as far as the eye can see and never change or get developed!

Oh pa-lese. If the community board and the local politicans did what they should have been doing (or more pointedly what the pols and boards do in other communities) they would have made this into a parkland.

Public service is to serve the public, not be some two-bit hack with a license to give away the shop.

Besides how smart is it to take away a power plant and add 1000 housing units to a grid that is on shaky ground becuase of all the illegal conversions that seems to be a specialty in western Queens.

"He has said the waterfront is open to everyone"

Oh, great, I feel so much better. A wall blocking my view of the waterfront and tiny little 40 foot walkway that, like that other brainstrom approved by CB1, Shore Towers, is closed more than it is open.

I agree with the other posters here, why is Queens singled out for private developers when the rest of the city is getting parks?

LIC is full of garbage because of lack of enforcement. they pay taxes for services, but what happens to the money?

Yes, we have no interest in 'developing' LIC - that was done a hundred years ago.

This was a vibrant community, but the same forces pushing people out made it this way with poor planning and zoning.

Turn LIC back to the voters and taxpayers that already live there. Use their taxes to pay for services, not to evict them.

The Astoria Houses consist of twenty-two X shaped buildings containing 1,102 apartments that are home to some 3,135 people.
32.3 acres of Astoria Village were destroyed in order to accomodate these behemoths. Dozens of beautiful mansions and buildings were lost, it seems that Astoria Village has been under the development radar for a long time as a result of its oversized lots.

Yeah, lets hear from those development zealots as to why Astoria Village should be torn down.

I think that the red painted base unifying theme is a brilliant design innovation...The elevators now stop on all floors...Queensbridge was built during the LaGuardia era to alleviate the crowding in the tenements of the Lower East Side...It is Socialist/Collectivist housing at its "best"..It domeciles the Lumpenproletariat.

What did I say..... these former proletariat domiciles are ripe for conversion into luxury water view condos !

I lived in those projects from 1951
till 1958 where my mom had the foresight to be able to move us out
as Queensbridge was getting to dangerous for us all.
I went to PS One as a kid and was
disliked by a couple of teachers
because we were "project kids"
I can retell a lot of stories to
prove that we were on the other side of the tracks,that being said as kids the projects were a terrific place to grow up as we
had the open docks to play on along
the east river ,we could watch the
trains near PS1 carry tanks and other military equipment during the
Korean conflict ,watched prisoners
at the court yard come and go and
steal red flares for Halloween from
the old greyhound bus yards,we were
really like the "small change" in
Truffaut's movie by that name.
Silvercup bread a day old was 5 cents a loaf and the area smelled
of chocolate from the factories
that made it there ,even welfare
women in the project worked in Loft's of Barracini chocolate factories before Easter and Christmas.I could see the bridge traffic from my bed and count the
beer trucks going by.
The gangs made us move after beating ala West Side story my friend just cause he was Hispanic.
Time to go, oddly I met my wife
in the first year of PS1 as a gallery b4 MoMA as she had a show of paintings there.
A million stories beyond the physical ugly architecture of this
place.

I lived there from 61-92 and I NEVER COMPLAIN ABOUT WHERE I COME FROM.I had a great CHILDHOOD there and you can say what you want about MY PROJECTS BUT DON'T MAKE IT SOUND LIKE IT SHOULD HAVE NEVER BEEN BUILT because there are MANY people who will think different