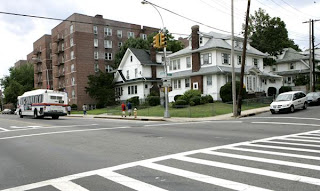 Samuel Henderson Sr. moved to Queens 40 years ago for its "light, the air, the space in front of the house to park the car," but said the family neighborhoods are changing as developers buy up properties.

"The downzoning [in residential areas] doesn't go far enough, and the city agencies have admitted to [CB 12's] ad hoc committee that they're not prepared for the proposed growth," he said.

Community members and civic leaders are so irate over the proposed Jamaica rezoning that they are calling on city politicians to fix parts of the plan targeting residential areas.

Joining the Jamaica Estates Civic Association and the Briarwood Community Organization, the Community Board 12 Committee has called on the city to remove the Hillside Avenue corridor from the zoning proposal. The associations opposed to this part of the plan say it will promote too much growth in an area whose infrastructure cannot handle it.

Why don't these people recognize "progress" when they see it?

Photo from Queens Courier
Posted by Queens Crapper at 12:41 AM

Why can't we send them over to CB1, the communtiy board from hell?

We are a bit distant from a revolt. Remember, with all the seniors who never moved out of Queens (only preoccupied with their agendas), the ??% of our propulation that is illegal (real civic participation there) and the bedroom residents in Astoria & LIC (wow mom and dad- this ain't Kansas! A Mexican restaurant and a Bangladeshi deli are on my block), you have very very few people that are left to revolt.

This is something we should have done 30 years ago.

The rot in the body politic encouraged by the clubhouse polities has all but destroyed the political discourse in Queens. Those fellows know exactly what they are doing.

All that residents have to do is band together and..... "return to sender".....that package of crap (currently proposed rezoning plan) that your local politicos (in bed with the developers) have sent to you !

This is the dawn of a new era !

Future warning:
You lazy on-the-take "representatives".....from the CBs on up had better learn to do the bidding of your "masters" (the community residents) and NOT the other way around !