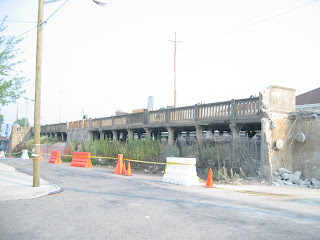 Recently, as you may or may not know, the MTA has been renovating our Broadway station of the LIRR... supposedly to make it handicap accessible. 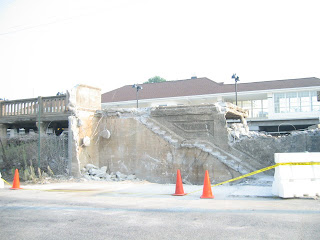 While the 93-year old platforms were in a state of disrepair, I'm quite upset at the fact that they were unceremoniously bulldozed. The platform and surrounding bridges etc were built in 1913. Most of the platforms etc have been demolished, except for one staircase which was repaired (with new stairs on the old foundation) and a couple other areas of foundation... as well as the underground passage. 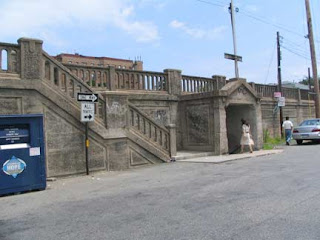 Kevin from Forgotten -NY offers his own take on the situation (and photos): 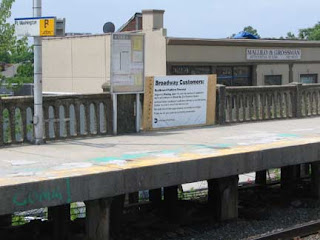 "...the city let it go to hell for decades till it had deter- iorated so much they had no choice but to re-do it. 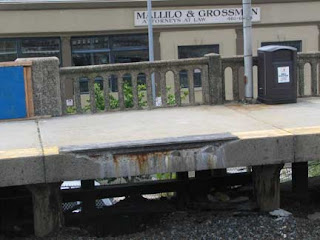 Some main- tenance over the years, and it wouldn't have been necessary but, that's how it's done here.

The same design can be found at Hollis."
Posted by Queens Crapper at 12:00 AM

What a travesty! A work of art & architecture decimated in the name of progress. The Mad Transit Authority could very easily replicate it, while installing a handicap-accessible elevator. It's not too late to reverse the damage, but greed sure runs a long way.

That was such a nice station. I prefered using it to the Bayside Station because the Broadway Station was above ground.

My first train ride was from that station. My grandfather, who lived near the Villa Bianca, took me to see the Christmas Tree at Rockefeller Center. I remember him buying the tickets to Pennsylvania Station. I thought we were actually going to PA and I started crying. I'm not going to tell you when that was, but the train had a double-decker car. Oh well, I still have my memories of the Flushing I knew.

It seems to me like the Euro 'Elf and Safety' people have got on board, ensuring lovely bits of architecture are torn down and replaced with possibly more of that modern rubbish we see around.

So sad...any more bumbling by NYC developers and modernisation groups? What next? A return to the Deskey's?

Before the expression TRAINSPOTTER entered the language, my brother and I would go to the Broadway station, and with a LIRR schedule on hand, watch the trains go by. I remember the thrill of looking down track at the appropriate scheduled time and spot the train heading towards the Broadway station. There once was a mineral shop across from the north entrance of the Station that I frequented. The owner was a retired construction engineer who worked on the NYC water aquaduct system. I still have many of the mineral specimens I bought there: Brazilian rose quartz, garnets on schist from IRT subway construction at 86th street, and a beautiful single quartz crystal that was bought for my 13th birthday for $5. (It was stolen from my college dormitory room a few years later. It took me 25 years to find a similar beautiful quartz crystal and by then it cost me $300. Anybody else remember that shop?

That Broadway-Flushing station holds alot of memories. I wonder how many people know there was model train club that met in the freight room in the early 60's(?). They had a sweet reproduction of the Port Washington line in there that was unbelievable--at least to a kid my age.

And later, when mischief entered the picture, I can remember hiding under the platform and jumping on the back of the train to Penn Station, getting a "free ride" behind those chains, never seen by the conductor. About a 1/4 mile towards Bayside was "the trestle", where we walked along the pipe on the outside over the tracks--and piled snow to push off on the roof of a passing train--probably scaring the hell out of the commuters.