Scoop from the Katz litterbox 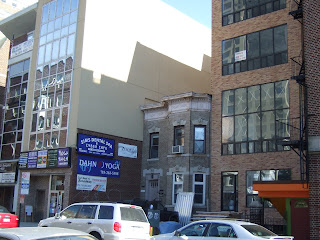 This is what happens when a neighborhood which should be designated an historic district (Forest Hills) isn't. The building on the right of the picture is new - still unoccupied (108-10 72nd Ave). It was just completed a few weeks ago (I've included the 'before' picture that shows what was knocked down last year). The beautiful building in the center (108-12 72nd) is typical of others in the area. The building on the left is about three years old (108-14 72nd). Both ugly buildings are the product of Franklin Baharestani and easily break zoning FAR codes according to NYCPropertyresearch. Baharestani was the guy who somehow figured out a way to get a three family fedders build in Forest Hills Gardens a few years ago. He even warranted an article many years back in the NY Times about his buildings. 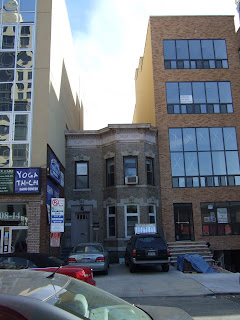 This is on 72nd ave between Austin St. and Queens Blvd. It is the true heart of Forest Hills. Those side streets make the neighborhood (I've included some pictures from the other buildings). 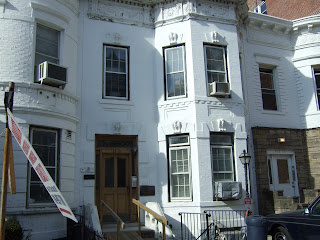 I always thought Forest Hills had some protection, since everyone comments on the beautiful look of the neighborhood, especially in ECon (east of Continental). It's like Bronxville or Greenwich. WeCon is mostly chain stores so it's already gone. Forest Hills really need some kind of protections since it is a truly unique part of NYC. 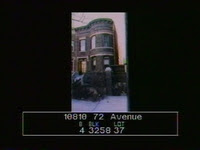 Outrageous! It looks like Forest Hills is getting Flushing-ized!

Katz must have been "in heat" when she allowed this to happen!

This is the perfect visual metaphor for land abuse!

Isn't that the committee that C.M. Melinda is chair of?

Well they had no interest, as they sniffily said, because they (in their little enclave) are protected by their own regulations that is stronger than the city.

As the good people in Sunnyside Gardens are about to discover, no group is an island.

Again, I do not blaime those people, but the city wide preservationists for poor leadership in not organizing the city.

you can write an entire book on Frank Baharestani's ugly creations.

These belong to brother George Baharestani, and son Steven Bahrestani:

Sunday Three For One Special

In a Corner of Rego Park, New Three-Family Houses

Their website is about as classy as their buildings are:

Notice how Frank Baharestani's website states he's a "leading developer." You can say that again! He racks up violations and dismantles buildings with inappropriate permits in some cases, and better yet, no permits at all.

The opposite side of the street has a plaque dedicated by Jeff Gottlieb of the Central Queens Historical Association. It was dedicated in '89 & again in June '06. These rowhouses are the earliest & only dwellings of its kind in Forest Hills. They were erected in 1906 by Cord Meyer, and led to the development of the remainder of Forest Hills. How can something so significant be in jeopardy?

Baharestani demolished 108-10 72nd ave illegally in 2006. A wonderful way to commemorate Forest Hills 100th anniversary! In all, he should be barred from doing any more development in Forest Hills and nearby neighborhoods, as a result of his shoddy development. He's no better than Tommy Huang.

He applied for an alteration permit to "renovate the rowhouse exterior" and "make an addition." Yet, he demolished the entire site & caused internal damage to a neighbor's site:

Only apply for a New Building permit after the demolition was illegal and the newer building is already being built. See how easy it is to get away with the law when it comes to the lax Dept of Bldgs:

Jeff Gottlieb worked for Morty Povman for years. With that kind of "powerhouse" backing, couldn't more have been accomplished by his Central Queens Historical Association?

When I last confronted a (sorry I can't say who or what) historical society member, they told me that Melinda Katz was the major problem with the lack of preservation in Forest Hills!

"It is the true heart of Forest Hills. Those side streets make the neighborhood."

I seem to be the only person that reads this blog that is in touch with the reality of Forest Hills. I live there and know the neighborhood and this street very well.

While I do agree that the row house on this street should have been preserved, the block where the row house was located is not a side street that "makes the neighborhood". That street is already mostly a commercial street, with stores and offices dominating the street. It is not a street full of row houses, as the picture makes it seem.

The side streets that "make the neighborhood" are to the east of Ascan Avenue, where there are several beautiful pre-war buildings on 73rd Road and 75th Avenue, and on the north side of Queens Boulevard which is almost entirely residential. And, of course, in Forest Hills Gardens.

I point this out to show that new development on the street featured in these pictures is very appropriate due to the commercial nature of this street.

The post has nothing to do with the residential area. But 72nd is zoned C4. That's low rise commercial. These Baharastani 5 story buildings break the FAR limits substantially.

The commercial area it belongs in is the R7 district (Queens Blvd). If we let these buildings in the C4 district, it's goodbye Natural market, see you 5 Burros, later Blue Elephant. I'm sorry you disagree but those types of C4 low-rise buildings make the neighborhood.

This new building breaks zoning laws and is way too close to Austin St.

FH Guy, even so that 72nd ave is dominantly commercial, it doesn't mean the newer buildings have to be constructed in a shoddy manner which violates building codes, and doesn't blend harmoniously with the character of the neighborhood. It also doesn't mean that the oldest & only rowhouses in Forest Hills, which inspired lots of development thereafter, have to be demolished. These are "endangered species" for Forest Hills, and such buildings merit the highest protection. Please try to acknowledge where I'm coming from.

THIS PROPERTY BELONGS SOLELY TO FRANK BAHARESTANI- WHICH IS NOT ASSOCIATED WITH GEORGE/STEVE BAHRAHS PROPERTIES.