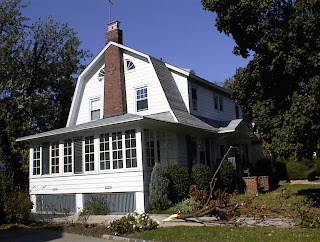 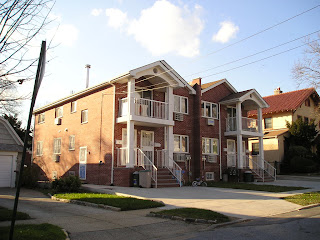 This area of Bayside was originally known as Bayside-Flushing when it was developed a century ago. 45 years ago, the neighborhood was bisected by the Clearview Expressway. Because of its R3-2 multifamily zoning, a few brick boxes were built on its edges. However, the integrity of the area became more severely compromised in the first few years of the 21st century, as fly-by-night building operations demolished beautiful free-standing houses originally lived in by actors, producers and celebrities of the early 20th century for more Queens Crap. These multifamily disasters would be next to each other on 208th Street between 42nd and 43rd avenues were it not for the one nice house still standing in between them. The tragedy of all of this is that within six months of these buildings being approved, this area of Bayside was rezoned for single-family detached zoning which probably would have saved them from being destroyed in the first place. The house below belonged to Vincent Aderente, an artist who designed the historic murals in the Flushing Post Office. I'm sure that if he saw what replaced his house, he'd be painting something that would reflect that crappiness! - P.D.G. 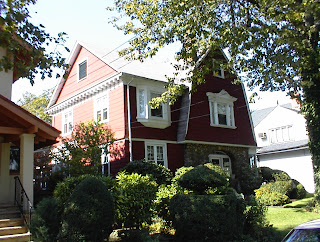 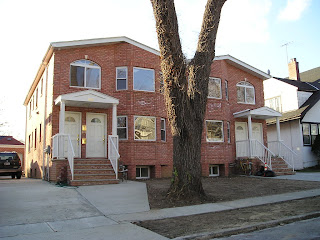 Update, 1/22/09: Vincent Aderente's grandson has informed QC that the house depicted is not the one that he grew up in and that it still stands. Sorry for the mistake. - QC
Posted by P. D. G. at 3:36 PM

What the hell is wrong with you? We aren't allowed to have quaint homes here. This is Queens, home of Art Crappo architecture, not Brooklyn!

Twin turds!
Aderente would have puked!

Ohh, this one hurts. I lived in a 1960-era semi-attached crap house across the street (right behind the church, and in fact built by the church). This house you've pictured was just, well, lovely. It was white with pink and green trim - sounds odd, but it warm and tasteful. A real nice suburban home. I loved it. Nice people. Even their CAT was nice.

Gone. And I'm starting to believe we're kidding ourselves if we think we can stop it.

Remember, Manhattan was mostly farmland until after the Revolution. I'm sure there was clucking of tongues as streets started to be paved.

I'm afraid it's inevitable. It's "progress" (which isn't always "progressive").

Please forgive me for going off on a tangent here, but I don't think we have ever thanked "Verdi" for all the nice photography on this site...The photos are well-exposed, focused and composed neatly to give a clear, well-understanding of the issue at hand...I come to this site for the intellectual, stimulating ideas and reportage AND image artistry!...Of particular merit are the recent views of Flushing and Elmhurst...Bravo Verdi & take a deserved bow! Kudos to you and keep up your, until now, unsung effort!

Thanks also to PDG for using before and after photos - it really drives the point home.

Vincent Aderante also made a mural "Long Island City" that stood for years in the Long Island Savings Bank on Queens Plaza. It was 30 feet high. The bank was sold to Astoria Federal who closed the branch. One Sunday some workers came in and took it away in the back of a pick up truck.

When a hat was passed around the community leadership to set up a fund to publicize its 'theft' all of $100 was contributed.

The building owner made the banking floor into a 'high end' club. It closed in 6 months.

The lessons learned from this story explains why the words 'Queens' and 'crap' are so suitable together. In Queens those things that were of its glorious past is casually replaced with crap. Its crappy leadership fails it in countless ways as they pump Queens dry.

I remember reading about that Long Island City mural that was "gone". I wish that the NYPD Art Crimes Unit would have gotten invollved. Yeah, sure!

But all we got was that measly contribution and a lot of tongue clucking from the various "hysterical societies". They're never any help....those "panty-waists"!

Thanks for the kudos George. I'm only doing my job. Everyone is walking around with camera phones, digicams and camcorders these days. Every citizen should become the eyes and ears of bad government.....especialy in your local commmunity!

When enough of these photo and video images appear (deluge them with the stuff), it presents the evidence that's needed! This has become the new form of journalism. ABC #7 encourages people to become "on-the-spot-reporters" as such.

A "Video Vigilante" cameraman (or woman) keeping a record of Community Board meetings might serve to shame them by exposing some of the laziness, inneptitude and vested interests of many board members. Can you hear me out there Ms. Koslowitz?

Oh, P.S. George.....I forgot to mention.....I didn't take the Elmhurst photos. That credit belongs to someone else.

They did a great job on those. Maybe I inspired their style. C'mon folks ......photo essays, montages, or collages are the way to go.

If one picture is worth a thousand words, several go even further when it comes to portraying neighborhood destruction and community sell-outs!

Look at all that empty underuntilized land. At least that is what they would tell us on western Queens.

They are going to help us fill it.

Why should all this 'wealth' be concentrated in one area? Northeast Queens should get it too.

In both development, and (don't get too smug) certainly in taxes to support the infrastructure in western Queens development, too.

I'm in love with that polka-loving dancing fool, George the Atheist. What happened to our date? I posted my message in the Queens Tribune and you didn't show. Is $50 too much?... you... you big heathen hunk.