(This is a revised press release received this afternoon.) 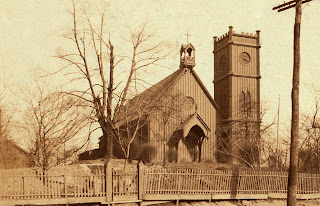 The photo at left is St. Saviour's Church in 1924. The following is a press release from the Juniper Park Civic Association:

(February 13, 2007) In two shocking revelations, both the NYS Office of Historic Preservation and the NYC Landmarks Preservation Commission (LPC) have admitted that the St. Saviour’s site contains the potential for recovery of archaeologically significant materials, including human remains.

Juniper Park Civic Association (JPCA) has long argued that the St. Saviour’s site is likely to contain historical artifacts and possibly burials. Both LPC and SHPO ignored those claims and quickly rejected the property.

Archaeologist Linda Stone recently uncovered 2 key pieces of information during her research that prove that the LPC & SHPO knew that our claims were valid, yet withheld this evidence while repeatedly rejecting our applications for landmark designation and listing on the state historic register. 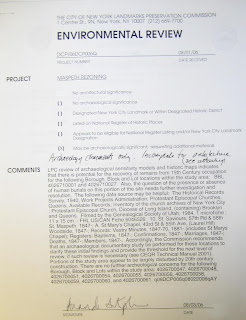 Amanda Sutphin, an archaeologist for LPC, wrote in an Environmental Review letter dated August 3, 2006: “LPC review of archeological sensitivity models and historic maps indicates that there is potential for the recovery of remains from 19th Century occupation for the … borough, block and lot locations within the study area … Also, the question of the presence or absence of human burials on this portion of the property needs further investigation and resolution.” 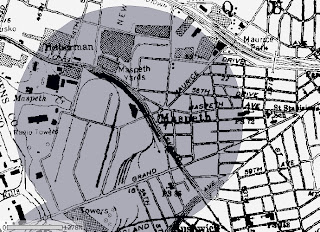 A map obtained by Ms. Stone from the New York State Historic Preservation Office shows that the St. Saviour’s site sits within an area deemed by the state to have high archaeological potential. (The church is located under the "M" in Maspeth.)

Ms. Stone stated in a recent report to JPCA: “With the currently available information, it is not possible to eliminate the possibility of finding human remains. In addition to the previously mentioned potential buried resources, the property may also contain remains associated with Revolutionary War activity.”

This information further supports JPCA’s belief that St. Saviour’s and its surrounding land embodies the history of Queens’ oldest settlement, and therefore must be saved from development. Two questions remain: Why did these 2 governmental agencies withhold this information from the public and why did they reject applications for designation when the case is clear that the buildings and land together comprise an intact cultural landscape that must be preserved for future generations? 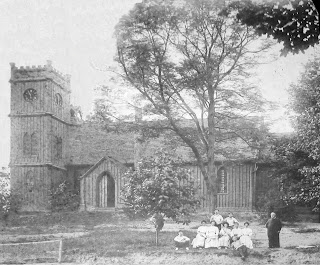 In addition, a photo recently given to JPCA by a former parishioner shows that the site was used for recreation back in the 19th century. A group of tennis players dressed in white sits in the foreground, with a priest believed to be Father Griffin standing to their left. A tennis net is set up to their right. And behind them is St. Saviour’s Church, designed by Richard Upjohn, before any alterations had taken place.

“This photo shows all that this property once was, and the potential it has to be a crown jewel of Maspeth once again,” said Christina Wilkinson, Chair of JPCA’s Committee to Save St. Saviour’s.

JPCA has asked the city to take over the entire site and convert the buildings into a community center and museum and the grounds into a park as part of the Mayor’s 2030 plan. Last month, at a meeting held at the Clinton Diner, 30 immediate neighbors of St. Saviour’s were unanimous in their sentiments, and signed a petition asking for the city to save the entire site. Additionally, more than 1000 signatures now appear on JPCA’s online petition asking the mayor to do the same thing.

Despite the findings of historians, archeologists, city and state officials, and the wishes of civic associations and residents, Councilman Dennis P. Gallagher (R-Middle Village) is working with the developer, Maspeth Development LLC, a foreign based company headed by Tomer Dafna, to permit a housing complex of at least 70 units. Gallagher’s plan is to save the small church and lobby for a zoning change for the developer to build on the remaining 1.5 acres.

“As of now, the church and land are for sale, and this is the perfect opportunity for Mayor Bloomberg to show that he is serious about having every city resident within 10 minutes walking distance of a park,” said Holden. “Every year the city finds it has billions of dollars in income it didn’t expect. It’s time to spend some of that money in Maspeth and save a piece of our rapidly disappearing history.”

Bloomberg, Gallagher, LPC, SHIPO etc. seem to all be guilty of criminal collusion and conspiracy to subvert the community in surpressing vital archeological evidence! What greedy bastards! They're pond scum!

Well, again, it seems to be common knowledge in the preservation community.

Funny how this never got down to the grassroots level in Queens.

I guess changing how the LPC commissioners serve out their terms will cure all the ills of preservation, right?

Everyone knew that the Maspeth area is perhaps the most archeological rich area in Queens, if not the entire city. Many digs were conducted there. It is the general location of human habitation for thousands of years.

The indifference to this location has been shared equally: the historical societies in Queens and the city, the preservation groups, the educational institutions, in addition to the media and politicians.

Even after dragging this before their collective faces, and pushing their noses into it, only through clenched teeth would they acknowledge it, before casting it away as soon as possible like a hot potato. Now give them something the Manhattan crowd wants - a 2 Columbus Circle, an Adirondack Building (considering the locals are too inept to know what is good for them) - and the wires run hot with attention and interest.

It is sad, it is pathetic, that only the surrounding people, with no training, no credentials, no status in any of those professional circles, has made any effort at saving this irreplaceable location.

I understand that the LPC actually targets (on its own, gasp!) areas that should be examined by an archeologist.

A large native-American presence for thousands of years is well documented. Earliest records of the area have African-Americans not only resident but involved with the commerce of Newtown Creek.

So what is the problem here?

Looks like Parkside and Pinky got to LPC and SHPO. A shame. From what I read about the founder of this church, he was 10x the man that Gallagher is, an honorable politician and very generous to his community. He took on Tammany Hall and won. It's too bad we can't turn back the clock.

A 160 year old church built by a famous architect, an ancient landscape with ties to prehistory, and a beautiful forest on the property. It's completely ridiculous that this site is not saved and restored. We waste more money in this city on nonsense. Buying this property would be a good move. Are you reading, Bloomie & company? (We know you are!)

Mary Beth Betts should be forced to give up her city pension, since she obviously is biased against a certain segment of the population which funds her salary with their tax dollars.

You're going to hear stupid comments like, "This is a standard archaeological review and doesn't make the property worthy... The site does not meet the criteria for landmark designation.” Mark my words. The only thing that makes a property significant enough for designation is the income level of the inhabitants of the neighborhood where it's located.

One thing is certain. If this gets developed, and the preservation community continues to remain on the sidelines, there will be a very active push to overturn the landmarks law.

Everything is in place.

I fully agree with the last poster. If we in Queens can't get equal protection under the current Landmarks Law, then it's time to rally together and dump it! I'm presently working to that end (with some very surprising and powerful people) ! Guess who?

Councilmoron Dennis Gallagher together with Melinda Katz have completely sold out to developers. Both are representing the interests of developers. Both have done absolutely nothing in the city council except stand by and watch our neighborhood landmarks and one family homes fall to their developer benefactors. It’s time to flush them both down the Queens Crapper.

The change in city government cannot come too soon. We must look to 2009 before LPC's Robert Tierney and his incompetent crew are sent packing. The horrendous Bloomberg administration will be known for destroying more neighborhoods than Robert Moses.