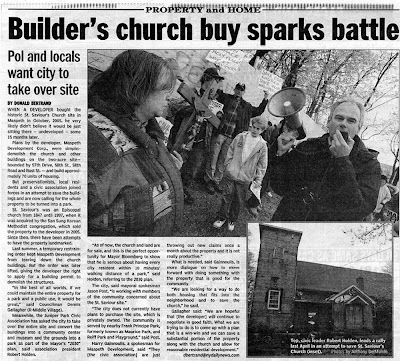 It appears the hype over the Mayor's "PlaNYC 2030" is just that - hype. This was sent in to the Crapper by a sharp eyed Daily News reader:

"This article proves that Bloomie has absolutely no intention of acting on his supposed goal to have all residents within 10 minutes walking distance of a park.

The city, said mayoral spokesman Jason Post, 'is working with members of the community concerned about the St. Saviour's site.'

The city is working with members of the community? Well that explains why the LPC withheld information about the site's archaeological potential from the group who is trying to save it.

'The city does not currently have plans to purchase the St. Saviour's site, which is privately owned. The community is served by nearby Frank Principe Park, formerly known as Maurice Park, and Reiff Park and Playground,' said Post.

Reiff and Principe Parks are both more than a 10-minute walk away from St. Saviour's (a Mapquest search shows they are both just under a mile away; .4 miles is considered a 10-minute walk by most standards). Both parks are good destinations if you want to play baseball or ride swings, but not the best places for the majority of park users to find respite.

This property is a ready-made park that is for sale. It contains historic structures and pristine land. And the city just reported an unexpected $3.9 billion budget surplus. There is no excuse for the city to drop the ball on this one except that perhaps the mayor is full of shit. Or maybe his TLC Commissioner, Harry Giannoulis, lobbyist for the Parkside Group, asked Hizzoner for a really BIG favor. And I like the way Gallagher is portrayed in the headline as being in favor of saving the site as a park. What a crock. They think we are stupid down here."

What a piece of work - they made Gallagher look like a preservationist.

I think they even shortened one of Gallgher's statements.. he claims he'd love to see the whole property saved, but I believe he also added that its not realistic and that development needs to be allowed on the site. Isn't that right, Pinky?

Only this way will Dennis' friends stay happy and therefore his pockets will stay full. Isn't that right, Dennis?

And Harry Giannoulis - some piece of work this guy is - or should I say some piece of dog crap? He's not a spokesman, he's a lobbyist. Period. Oh, but wait, he's also a city commissioner. Isn't that just beautiful. To allow this situation is a disgrace to the city and to common decency. Harry should have the decency to resign from his city post, but of course decency and ethics don't mean anything when you work for the Parkside Group - and apparently they don't mean much at City Hall either.

And let's not forget to thank the Daily News for this flushable piece of journalism. Didn't mention Harry's city hall connection, or Pinky's passionate affair with buddies at the Parkside Group and their foreign developer client. That kind of context is nice to understand what people's real motives are. But there's no need to piss anyone off with the full truth, now is there?

How insolent and hate-filled is Michael Bloomberg towards the taxpayers of New York City? Let me count the ways:
§ The school bus re-routing fiasco – sneering at the parents of little children who now must walk and use public transportation for great distances in the morning dark, freezing cold;
§ The rising felony crime rate in our public schools; doesn’t interfere with Bloomberg’s day; he’s surrounded by fully armed security; but, who gives a good goddamn about these students? Most are minorities anyway, the remainder, if they were worth Bloomberg’s concern, would be in expensive private schools;
§ Transit Authority holding over 13,000 employee checks, make no effort to contact the employees – unmanaged, insolent, “little people” hating bureaucratic bungling;
§ Bloomberg’s seizure of the southern end of Randalls Island Park for two weeks to have a private party – no little people invited, only the “precious” few;
§ Bloomberg and Benepe grant exclusive use of Randalls Island Park ball fields to private schools – not for use by little people;
§ Bloomberg and Dept. of Heath Commissioner Frieden using taxpayers’ hard-earned money to distribute NY Logo Condoms – symbolic of the deliberate “screw-you” to those taxpayers whose religious beliefs the city disdains;
§ Bloomberg and Adrian Benepe neglect the care of trees in Maspeth - just for the “whiney” “little people” beneath concern of these two. Now, these trees must be destroyed, denuding neighborhoods of greenery and reducing property values;
§ Bloomberg’s and Benepe’s indifference to the annual failure to account for over $70 Million of private money donated to the Parks Department – leaving open the question: who’s got that money?
§ Bloomberg’s utter indifference to the Parks Department refusal to conform itself to the law that requires that Parks provide access to all parks for all disabled – “little people”;
§ Bloomberg’s utter indifference to the plight of long time municipal civil servants – employees of the Parks Department – minorities – whose eligibility was maliciously ignored so that non-minority (white) employees could be promoted, given bonuses and raises in excess of standards; these minorities were just “little people”, who cares; who hired them to start with?
§ Bloomberg’s and Benepe’s total failure to manage affairs at Flushing Meadows Park, where structures are dangerously decrepit, engineering reports vanish, and Dept. of Buildings violations are arrogantly, dismissively ignored; only the “little people” had better never ignore DOB violations; why are “little people” even using city parks anyway?
§ Bloomberg’s total contempt for those in northern Queens who suffered from Con Edison’s failure to supply power in a long heat wave and his love fest with Con Ed CEO Burke, forgiving him of responsibility for the failure – which responsibility in fact belongs to Bloomberg in any event, due to his lawbreaking refusal to assist in keeping illegal aliens from the city; having their presence be the source for the severely increased demand for services, including electricity, as well as his opposition to the improvements to the power grid; small wonder Bloomberg kissed up to Burke; Burke keeps silent; victims suffer; aliens keep arriving; Bloomberg is delighted – more “Little People” are kicked in the teeth;
§ Blitzing with parking violations those very people who listened to Bloomberg and didn’t move their cars, so that they were buried by hardened cakes of ice by the deep piles placed there by the same Bloomberg’s snow removal force; why are “little people” thinking they have Bloomberg’s permission to use the roads?
§ Bloomberg’s failure to collect the garbage after the snow, despite having hired many, many extra employees in order to reduce/eliminate overtime during snowstorms.
§ Bloomberg’s sneering at Rev. Cletus Forson whose car was ticketed while he administered Last Rites to Ms. Nelly Munoz without explaining the presence of so many other cars parked in the same zone, and the presence of the clergy placard in Father Forson’s windshield; the old bag was going to die anyway; what did this priest think – he was going to keep her alive?
§ Bloomberg’s insolence in reference to St. Saviours Church property; he promises a park within 10 minute walk of every home, but wants no part of converting this little property into a local park; he says that the “little people” should walk over to Principe Park far more than a ten minute walk; just screw those little people; who the hell do they think they are!
§ Bloomberg’s sneering at homeowners as “little people” complaining of developers’ plans to disrupt long time neighborhoods taking away profits and leaving behind disgraceful ugliness;
§ Bloomberg’s and Benepe’s plan to unleash dogs in all our NYC parks onto all sorts of vulnerable and frail innocent park users. Keep “little people” out of the parks!

These are just the recent events. Bloomberg’s long history of arriving in New York from Boston, cynically changing party affiliation (demonstrating loyalty to himself alone), along with his weekend departure from this city that he detests so thoroughly. Are all full demonstrations of his antipathy to the “little people” and pandering to the “precious people”.

Bloomberg is the "Teflon Mayor" (when it comes to listening). Whenever any community tells him they're sorely in need of something, it bounces off his ear drums!

We need a revolution (preferably French)!

Only joking folks ....no Guillotines (lest the gov't be scanning this site).

Hey Gary Ackerman!! Maybe you can make your newspaper useful to the people of Queens for a change.

Look at this litany of issues!!

Ya gonna write about just ONE?

Oh? Why should he?

4. A nubile young lady's profile that can be enjoyed by a balding, fat, over the hill [ ]?

Dan Bertand up to his tricks again?

Well if we stay on his biased spin of his 'reporting' the Daily News might get the hint that a credibility gap exists between his pen and the people of Queens.

Time for a replacement!

If Bloomberg's nose grew like Pinnochio's every time he told a lie you'd have an alternate bridge to Staten Island !