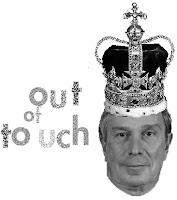 Boy, his highness really pissed off the outer boroughs this time:

Has Your Street Been Cleared?

After Storm, Parking Tickets and an Outcry

Sir Bloomie has probably never shoveled the white stuff in his life. Plenty of brown stuff, however.

Mayor Does About-Face On Alternate Side Parking Tickets

Mayor Michael Bloomberg has made an about-face on parking tickets issued to drivers whose cars were stuck in the snow after Wednesday’s storm.

The city has now decided to forgive all alternate side parking tickets for yesterday, and today.

The mayor’s decision to keep alternate side parking rules in effect following the snow storm drew serious criticism. Many drivers argued the ice and snow made it nearly impossible to dig their cars out.

The mayor said yesterday moving cars was important for the plows to do their job.

"In retrospect, in some parts of the city, there was not that much snow and in other parts there probably was an imposition,” the mayor said on his morning radio show today. “We did get a lot of calls and listened very carefully to what the Sanitation Department heard, what our Community Assistance Unit heard, we took a look at the call that came in to 311 and … this morning I instructed the Department of Finance to waive any Alternate Side of the Street parking tickets for yesterday and today."

Tickets issued on Wednesday during the storm still have to be paid.

Tickets from today and yesterday will be automatically taken out of the city's computer.
Posted by Queens Crapper at 8:19 AM

It is funny, Queens goes ballistic over poor snow removal, but is so passive when it gets a snow job from the newspapers and politicans.

Are your cars more important than your families?

If they are blaming the city for not removing the snow, what do you think?

Pay the damn ticket, then rethink your parking situation as more people file into the neighborhood without planning.

It's the little stuff that does in a mayor.....like screwing up on snow removal. Remember Mayor Lindsay, another Republican, and his failure to deal with removing that same white stuff? It sunk his re-election bid in the 1960s!

I'll bet there were no snow removal problems in Manhattan. His imperial highness made sure of that!

Our streets got cleared PDQ. Never happened this way before. Somebody is running for mayor in our district......just to illustrate how important snow removal is for a future mayoral candidate.

Let's declare the day a religious holiday and then the parking rules can be suspended....May God bless you all.

"Sir Bloomie has probably never shoveled the white stuff in his life. Plenty of brown stuff, however"

When this arrogant Bostonian has one of his low-level staff make an effort to think of the taxpayer, the result is always the same: When the staffer tries to inform the mayor that the taxpayer has the vote, Bloomberg and the "better informed" staffers have a big belly laugh.

As a matter of fact, the only cheer Bloomberg gets is from a successful screwing of the "little people".

"What's the fun of being mayor if I can't screw anyone who gets in my way?"

I propose a new city flag design that's more truly reflective of the greed and real estate dominance of our city. Perhaps Queens Crap might consider a design competition. I would specify.....only a suggestion....., that the colors should be.... Yellow (for...you know....#1), Brown (for.....it's obvious.....#2) and Green (maybe Gold also) for money! Wadda ya think?

See the mess in removing 2 inches of snow?

Bloomie, the out of touch billionaire turtle-faced egomaniac, fiddles while Queens quickly becomes unlivable. He can't relate to Queens. The man thinks he has all the answers and never admits to a mistake.

We here in Astoria will not quickly forget his inaction during the blackout last summer. His arrogance is getting harder to stomach as each day goes by.

The only thing bigger than his obscene wallet is his bigger ego. Let this guy run for president in 2008 so we wouldn't have to hear him whine for at least a few months.

He'll be the Mayor known for helping destroy middle class neighborhoods in this city. He has completely neglected Queens County.

Queens has been kicked around long enough by this billionaire and his bulldozing developer buddies. We will never forget how he treated us this past summer in Astoria. Now tack on overdevelopment, overcrowding in schools, overzealous police, and his underachieving commissioners and it’s clear we should count the days when he packs up his billionaire boys club and fades into the sunset. However here in Queens we will not enjoy the sunset because by then he wil have turned our neighborhoods into a high rise haven for Manhattan rejects