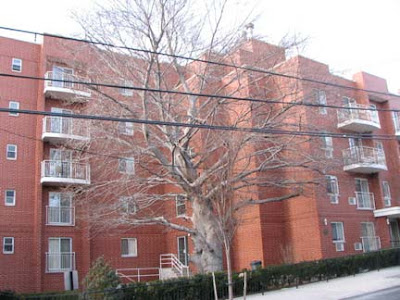 Queens has plenty of historic buildings, the Bowne House and the Quaker Meeting House in Flushing. The Riker-Rapelye-Lent House in Astoria, the Cornell-Appleton House in Bayside.

It also has plenty of trees, more than any other borough, and nearly twice as many street trees as runner-up Brooklyn, which for some reason is associated with the towering plant life.

Queens doesn’t have many historic trees, though, so thanks are due to developer Anthony Wan, who went to the trouble and expense of preserving one of them.

In 2002, he was asked not to remove a large and beautiful tree on property in Woodside where Signature Builders of Elmhurst was developing two condos.

Experts from the Parks Department and the Landmarks Preservation Commission established that the tree was a copper leaf beech and was about 225 years old. That means when the tree was first sprouting, the outcome of the American Revolution was still in doubt.

Wan responded graciously and generously. He halted construction and hired an arborist to look after the tree for the duration of construction, altering his plans to accommodate the stately tree.

Five years later, the first building is 70% sold and the second is nearing completion. We hope both are 100% sold soon. Such excellent corporate citizenship should prosper.

Photo from forgotten-ny.com
Posted by Queens Crapper at 3:44 PM

It is good to showcase the good on those rare occasions that it happens.

Even us old dogs of the preservation wars appreciate and savor these rare victories.

Mr. Wan....a blessing on your head for appreciating the beauty of this magnificent and stately tree. You will be able to show it to your grangchildren with pride. They, in turn, will be blessed by having such a grangfather!

Yes, Virginia there is a Santa Claus

Woodside loves its trees almost as much as Jackson Heights. This Copper Beech tree should be a tourist stop,
its quite impressive, on 63rd St between Queens Blvd and Woodside Ave.