The latest from Northern Blvd 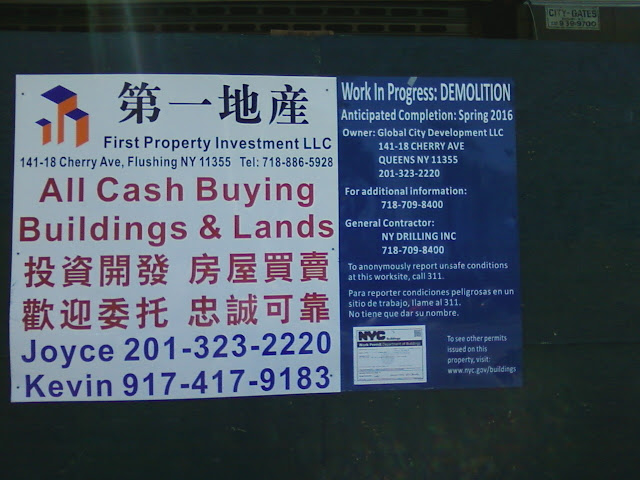 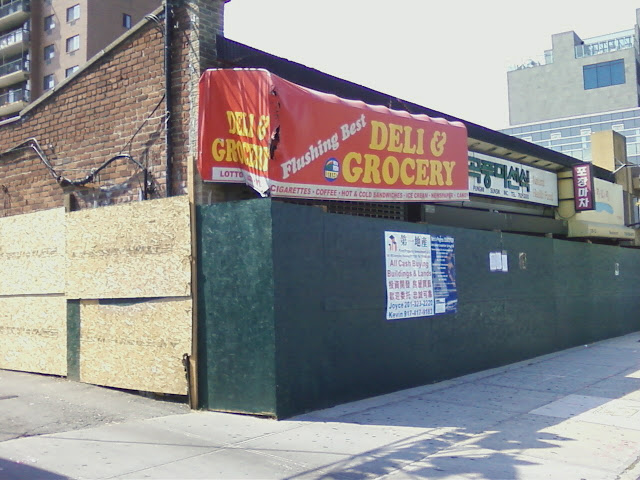 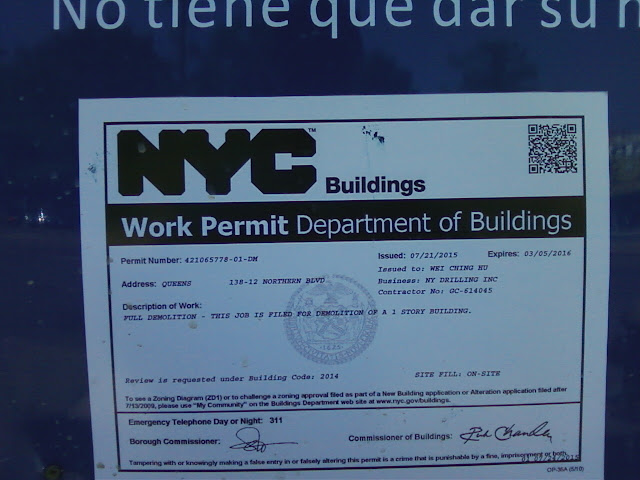 Some pretty interesting numbers for this project. And that's one huge ass community facility...
Posted by Queens Crapper at 12:19 AM

I just looked at the Zoning Diagram for this project, and it's totally different from the numbers put on the website for the application.

They make a little more sense, but are still clearly not legal according to the maximum floor area allowed.

The amount of Commercial floor area is 6,081.05 square feet, or 0.76 FAR. Under C1-2 zoning, commercial development is limited to a 2.0 FAR - if it were developed ONLY as commercial - which would be 15,996 square feet. However, because it's a mixed-use residential/commercial building, the Commercial FAR must be included in the residential FAR calculations. In other words, it cannot be higher than the 2.43 FAR maximum allowable FAR in the existing R6 zone.

In other simpler language:

The building is almost 1.0 FAR larger on residential zoning than allowed, and the commercial FAR should be included within that maximum FAR of 2.43. The additional ACTUAL Community Facility FAR - .84, or 6,715.77 square feet - is allowable and not an issue.

This project needs to be stopped and audited immediately, and the architect should go under immediate administrative investigation to lose his credentials and/or be indicted for filing a false instrument. Additionally, city and state investigators should be looking into the Plans Examiner who gave the approvals for this project.

There is another group of one story taxpayers to the left of this project. Then there is the YMCA.
If they ever move into Flushing Commons, it will likely be torn down too, making room for yet another high rise monster.
Tell me Flooshing is not being colonized like Julia Harrison once noted.
You have Meng and Koo. As soon as Stavisky is gone you will have another Asian rep in government.
Might as well declare Flooshing a Chinese off shore colony and be done with it.
And let them pay for their own services not NYC!

But with Koo and Meng, will it Paul?
They will be taking care of their own kind,which means they will look the other way.

The Zoning Diagram also does not show the Sky Exposure plane illustration.

What do you think DOB will do??!

No surprise here. I have a house next door to me that is partially at a standstill due to a "retaining wall" that affects our property...it holds up part of our yard. We were told by an engineer to do "nothing" as the space for the wall is not "legal"....the driveway for it is too small and I think, the house is too big .We are stuck with a rotting retaining wall next door to a McMansion. I found out the name of the architect. He is one of the people indicted in February for BRIBING a Buildings inspector. Gee , I live next door to a Million Dollar "CRAP HOUSE"

The Flushing YMCA is perfect where it is now, not crowded, and accessible by mass transit, with plenty of parking spaces. Some years ago, it was renovated and expanded. The only reason they want to move it to Flushing Commons, is to use the vacated space for a high-rise monster.

Am I missing some thing?
Can anyone summarize the key point for me? Why this project is not welcomed?

DOB will do as little as possible as usual.
This a most lazy, if not crooked department.
It is the local Councilmember who should normally be putting the squeeze on DOB.
But Chinese Councilman Koo will not go up against a fellow countryman, even if they're breaking the law.
Chow Mein sticks together. Blood is thicker than bird's nest soup.

Chinese deveoper...Chinese councilman.
What do you think will happen?

Forget it Jake. It's Chinatown!

The deal was the Chinese on Main and Koreans on Northern. Go up Ru Zwa Avenue, to O Nyun Street then take Na Dwan Blvd all the way to Cho Sen Village.

"All cash buying buildings and lands".
LOL!
Who did their Chinese to English translation?
I think this is what they call "Chingrish".

In all fairness, what's wrong with a variance that would change the zoning on Northern Blvd.?

This type of planning is simple, force developers to seek specific boundaries like Northern Blvd. and let the dice roll.

Skyscrapers on Northern Blvd. makes more sense than an "anything goes" way of satisfying the $$.

With all of the racism, you totally miss the point! The approved building totally exceeds what is allowed in its R6 zoning.

Scott68 are you from Mars ?
They will never stop building if money can be made by hook or by crook.

Am I missing some thing?
Can anyone summarize the key point for me? Why this project is not welcomed?

No one is saying that there shouldn't be development on this site. The problem is that the plans as filed are not following the current zoning that the property has.

Question #2: In all fairness, what's wrong with a variance that would change the zoning on Northern Blvd.?

This type of planning is simple, force developers to seek specific boundaries like Northern Blvd. and let the dice roll.

Skyscrapers on Northern Blvd. makes more sense than an "anything goes" way of satisfying the $$.

Again, no one is saying that development shouldn't occur at this site. The plans that were filed were AS OF RIGHT, meaning that, in theory, no additional approvals are necessary. However, the plans must follow the existing R6 and C1-2 zoning. If the owner wanted to increase the development potential on this property, he could file for a zoning change. That hasn't happened. Instead, the plans on file should never have been approved as they are way beyond anything allowed in an R6 zone, in terms of floor area. Developers need to follow the rules and shouldn't be rewarded with more development for breaking them.

As for a variance: the developer has also not filed for a variance. A variance would be difficult to achieve at this site, as you must prove you qualify for one through various types of hardships. It is clear that this site doesn't meet any of those requirements.

I'm so sick of this chinese crap being built everywhere here! When will the chinese takeover stop? How many more third world china men and women can we take into nyc?

How many more people can be squeezed into an already overcrowded sardine can #7 subway car with all of this epidemic overbuilding?
Improve transportation, schools, hospitals, emergency services responses before you build more and more.
That is what is wrong with all of these projects. As far as "as of right" goes...this is as of wrong. CB7, being one of the most corrupt boards in NYC would have approved a variance anyway.
This is the board of the rubber stamp and follow the buck Chuck Apelian is the ink pad.

How many Chinese can you squeeze into a jam packed subway train?
A little wok oil makes a great lubricant. The teeming Orient is what you have here.
Cheek to jowl living where life is cheap, but not the rents.

And Peter Koo can go back to the less crowded conditions in his Nassau county home.
Is it Port Washington or Great Neck where councilman Koo REALLY lives?

Queens Blvd. can handle this kind of density. It's wider than Northern and the transportation is more conveniently located.
Wait until all of the other one story buildings along Northern get developed. After the Long Island Expressway , Northern Blvd. will become the second longest parking lot. The traffic density in Flushing has become a nightmare. All of those new turn restrictions to accommodate the Flushing Commons project are horrific. You have to negotiate a complex roundabout course to get anywhere and passing around Flooshing could take 40 minutes. What "great" planning.

The dragon has won. Now build a picturesque Great Wall around it all with an elevated freeway above it to pass over the mess.

Our conquest of Northern Boulevard can best be described as , the journey east.

Hey, what has that whale of a senator, Moby Stavisky got to say?
Peter Koo just flashes his inscrutable smile.

Which Paul....Vallone or Graziano?
This will be the third time Graziano will run, if he does.
But he is the one! Vallone will flush his district down the drain.

It's only balancing things out in the world.
We invest in Communist China. Then we let Commies from the mainland buy American soil.
WTF do we go to war for?
Let's keep the peace around the world and have some business meetings instead of conflict.
As we become more socialist...China becomes more like we used to be.
Good night and good luck, America.