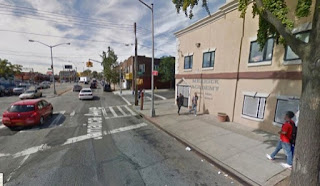 The plans for a juvenile group home proposed for a Jamaica Avenue site in Queens Village have been dropped by the city Administration Children’s Services after community members protested for months, elected officials announced Tuesday.

The former Merrick Academy school building on the corner of 207th Street and Jamaica Avenue would have become a group home for juvenile delinquents to transition into responsible young men while in a neighborhood environment through a state program administered by ACS.

Residents joined with elected officials and community leaders to stop the site plan through legal and social means and were elated to hear the news that the proposal for the group home had been canceled.
Posted by Queens Crapper at 12:35 AM

don't worry,
they heard your voices.
it will now be made into a drug rehab center.

I guess the landlord didn't share the wealth with the local elected officials.

From bowling alley to corrupt charter school founded by former Senator Malcolm Smith to almost juvenile delinquent home, but the city drops its plan for the juvie center after months and months of protest by community members in Queens Village. Now let’s see what shit they attempt to put there, a homeless shelter, maybe.

Here is where things get interesting. For those who do not know, this site, which was the former charter & very corrupt school, Merrick Academy, was founded by shady corrupt former Senator Malcolm Smith, who ran it into the ground (http://www.nydailynews.com/new-york/education/merrick-academy-students-suffer-state-senate-president-malcolm-smith-profits-charter-school-article-1.177212). Just how corrupt was the school, besides Smith being founder, crooked Congressman Gregory Meeks sat on the board along with Smith’s buddies and questionable folks like his business partner, Darryl Greene and attorney Joan Flowers, who ran for Council Member in district 27 a few years back and was campaign treasurer for both Smith and Meeks. Flowers also pocketed $19,675 in fees while she served on the Merrick Academy board. My, what corrupt tangled webs are made in Jamaica and the kicker, Meeks is still in office and Flowers had the balls to run for office after all of this. I am surprised that Jamaica’s wonderful Rev. Floyd “Money is my God” Flake was not involved (since he has shady business dealings with Smith), but he had bigger fish to fry and bigger money gains (http://www.nytimes.com/2010/06/18/nyregion/18flake.html?ref=topics&_r=0)

These are the kind of folks running Jamaica. And one wonders why Jamaica is the way it is. See “black lives do matter”, when it comes to corrupt black Jamaica leader’s lives.

See and you thought this was a post about Queens Village folks winning a victory.

That location started out as the Hollis Theater. Saw many movies there.
Then it became a bowling lane (Hollis Lanes?)
All downhill after that.

When a community sticks together for a cause it does work. Good for them.

They should put these places where the kids are from. That's the ultimate fair solution.