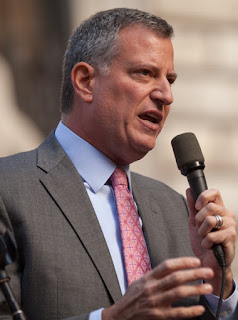 Speaking at a press conference celebrating the start of an $87 million roof repair project at the Queensbridge Houses—the largest public housing project in the nation, according to the administration—the mayor pushed back on attacks on his housing authority Chairwoman Shola Olatoye and the “NextGeneration NYCHA” plan she commissioned for him. Critics, including Bronx Borough President Ruben Diaz Jr., have argued that NextGeneration’s development provisions could cost NYCHA residents precious green space and badly strain city resources and infrastructure.

Mr. de Blasio repeatedly emphasized that 13,500 of the new apartments would rent for below-market-rate, and that the city would plan construction in concert with residents—two things he said were missing from former Mayor Michael Bloomberg’s proposal for “infill,” which would have focused mostly upscale development on NYCHA space. The liberal mayor also stressed that new construction would create revenues that would other wise be unavailable to the authority, which currently runs deficits of hundreds of millions of dollars each year, and has a $17 billion backlog in repair work.

The mayor even promised that any parking or recreational space sacrificed to new construction would be restored in some form to residents.

“We’re going to make sure any facilities that people have, whether it’s parking, playground, whatever a development, are made whole, even if it means someplace else in the same development. We’ll make sure people have the same amenities,” he said. “We obviously will account for any infrastructure needs.”

He did not elaborate on the details of how such adjustments would work.

Of course he didn't because there's no place to put that stuff.
Posted by Queens Crapper at 12:13 AM

$17 Billion back log in Project Repairs and I get Denied 9/11 healthcare benefits because I survived the attack
Their is nothing more I Could add to this statement.

Average parking utilization in NYCHA lots is 59%. They won't get rid of 41% of a single lot, they'll get rid of entire lots and make people walk to a different one in the complex. That's how the adjustment will work.

And really, if you need a subsidized apartment in this city then maybe you aren't in a position to own a car. Take the bus or train.

The only reason the parki lots are underutilized is because tenants can't afford $350 per year to purchase a parking spot, especially when there is no enforcement of the reservation of particular spots. I rented a guest spot for one year and every time I tried to use it someone else was parked in it. When I called 311 I was told I had to call the precinct. When I called the precinct I was told someone would come but I could not wait to see if someone ever came. When you call the contractor you have to leave a message but no one ever calls you back. That is how they justify taking the parking lots away.

Big Bill doesn't know WTF he's doing , promoting, or defending from one day to the next.
He is one of the most contrary unsure mayors we've had in ages.
He can always be counted on pulling a switcheroo to increase his poll ratings.
Meds, Dante and his First Lady wife are holding him up.
REBNY supports him. What a weak kneed , limp wristed doofus we have for mayor.

Mayor Big Slow's promise of affordable housing is turning one of the biggest scams in this city's history. If not the biggest boondoggle. It's not even that they don't properly plan to improve the surroundings and infrastructure to compliment such a rise in population, this won't even help since the percentage allotted and the plan's definitive value range of affordability doesn't and wouldn't help the majority of people who truly need it and it doesn't jibe with the true ratio of rich to poor families or individuals in this city. Especially since those in city hall and city council refuse to address the growing poverty and stagnant wages that is causing this problem in the first place.

But this won't be a problem for the moneyed interests, the predator developers, the frivolous spenders and the immoral greedy landlords of regular buildings that will exploit the runoff of these developments to justify obese rent increases and ruin lives. Why does the city feel that their greed should get first dibs? And again, if people can afford the market rate, why would they need the city to help them get an apartment? And do they go by the same lottery system to "win" these dwellings as the 20 or 25 % do, surely the chances are obviously better.

But this may be why the city is continuing it's blatantly illegal and immoral practice of dropping shelters all over the place, with more frequency in Queenscrapland. For this is true affordable housing plan. Nothing more affordable than free despite the lack of amenities and personal space and safety. But this won't be a problem for the money interests, like city funded non-profits like Samaritan Villages and the shell companies that invest in them.

Yes it was obvious, you're welcome.