An idea whose time has come? 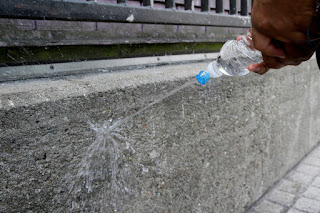 Public urination has gotten so bad in San Francisco that the city has painted nine walls with a repellent paint that makes pee spray back on the offender.

It’s the latest effort to address a chronic problem in a city where the public works director calls himself Mr. Clean: Walls are coated with a clear, liquid repellent material that goes on much like paint. When the wall is hit with urine, the urine splashes back on a person’s shoes and pants.

Mohammed Nuru, director of San Francisco’s public works department, says offenders will need to make the mistake only once to get the idea.

Nuru got the idea from Germany, where walls in Hamburg’s St. Pauli quarter are painted with the material to encourage late-night beer drinkers to find a bathroom rather than an alleyway.
Posted by Queens Crapper at 12:08 AM

Leave the pee smell alone,it covers up the stench of rotten fish in Flushing.

Dogs can openly piss in the grass but humans cant

Why do people hate freedom and basic natural functions ?

So they will use a tree or bush instead...

Let's use some of that stuff on Flooshing's sidewalks to kick back the Chinese spit wads back into the offenders faces.
Yesterday I saw a Chinese man roll down the window of his car....take a good throat clearing wind up...then hurled a spit wad at least three feet towards the curb. "Going, going, gone...right outta the ball park".
Unsanitary barbarian! I've taken to calling these wads, "sidewalk oysters". Oops, don't give any chefs any bright ideas.

Take your natural function and dispose of them in a bowl...then drink it if you like 'em so much.
Or, go piss on the third rail on the #7 and get a rush.

'Dogs can openly piss in the grass but humans cant
Why do people hate freedom and basic natural functions ?'

I immediately thought of this>

This from a city that had a human fecal patrol cleaning up when I lived out there.

I have a few issues here with the comments that have been posted. First, dogs can piss on the grass but humans can't. Give me a break, we are humans, were supposed to be better than dogs asshole. But yes the other anonymous is correct, anything is better than the smell of rotting fish in FRUSHING. And last but not least sidewalk oysters. He is absolutely correct. No excuse me I think I'm going to vomit again, warm chowder anyone?

Does this mean there will be public bathrooms?

Oh pulleez, people are complaining about #1?!? Come visit 43rd Avenue between 72nd and 74th Street. The north side of the street- well, sidewalk, to be precise- is guaranteed to have at least one or two piles of human feces at a given time, surrounded by soiled toilet paper wads. Yes, the human race is on a steady decline.

Oh, and they pee freely here too, only they are too civilized to pee onto the curb or a wall. No, folks round here like to pee into plastic bags and leave them on the street or hanging on a fence for neighbors to clean up.

P.S. I like the idea of the repellant paint being used to bounce "oysters" back into the spitter's face. I would LOVE to see that, but I fear it will remain only a fantasy.