Plan to clean up stink of Flushing Bay 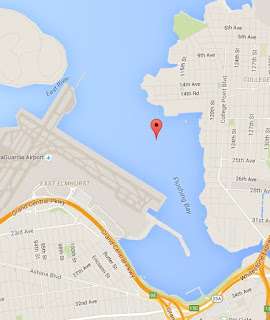 The Department of Environmental Protection will begin dredging sediment from the bottom of Flushing Bay in 2016, according to a city official, at a cost of $47 million.

Sediment has formed over years due to Combined Sewer Overflow, or CSO, from nearby roads and highways.

It hasn't helped that a runway at nearby LaGuardia Airport partially blocks the water from "flushing," according to DEP Commissioner Emily Lloyd, who testified about the funded project at a May city council hearing.

Councilwoman Julissa Ferreras-Copeland, who lead the testimony as the Council's finance chair, told Lloyd the smells are compared to rotten eggs and has plagued her district for years.

The project, scheduled to be completed in 2019, will remove most of the gunk at the bottom and make a "significant" difference, Lloyd said.
Posted by Queens Crapper at 12:04 AM

Deport all of china out of there and the smell will surely go away!

That stink pot has been cleaned at least two times in the past through dredging, I believe, by the Army Corps of Engineers.
Tell the unsanitary Flushing newcomers to stop dumping their crap illegally into the manholes.
Let Peter Koo get off his closet Republican ass and educate his countrymen on proper Anerican manners regarding sanitation.
However, I must say that things might be improving a trifle.
Yesterday I heard a young Chinese man start to clear his throat...expecting him to spit a wad onto the sidewalk.
Surprise! He spit it into the street instead. Maybe the second generation is learning.

The stink will return after dredging.
Uh...excuse me....but wasn't that multi million dollar retention tank supposed to alleviate the stench?
Hmmmmm....I guess not. That was just a boondoggle to make some politically connected contractor get rich.

I guess it's getting hard to sell that picturesque waterfront view real estate around the area.
Curb the overdevelopment and you'll see less shit running into the bay.
Since the mega development put more asses on toilet seats, where will this shit flow?
I guess that visitors to the U.S. Open have been doing some complaining about that Flushing fragrance too.
Hey Koo...what ya gonna do?

You might nod off for an impromptu nap on the 5:29....but when your train nears the Flushing River, you will be sure to get a wake up call by the "Eau de Flushing" wafting up from the waters. As I heard one passenger proclaim, "Sniff...sniff...this must be Flushing".

Ditto that.
I heard a group of train traveling Chinese teens say that the bay smells worse than Chinatown.

That bad smell has been there for decades. Anyone who has chosen to live there since 1940 has bought into it.

There's not enough dredging capacity in the universe to make and to maintain Flushing Bay as "clean". So don't bother.

It has stunk there before any significant influx of immigrants. They need to dredge the whole area.

Fill it in with cement,case closed.

Very true about the stench of the bay, especially at low tide. It has existed as far back as I can remember.
I was 13 years old when we moved to Queens in 1955. It stunk then. It stinks now. This is a natural condition which was created by blocking the flow of water by the 1939 World's Fair construction and La Guardia airport runways.

LOL!
Many a time I found myself holding back a wicked fart to avoid embarrassment by waiting for an opportune moment.
I would wait until the 7 train passed Willets Point to finally cut the cheese so it would be masked by the river stench and go unoticed.

It smells like Canarsie as the old saying goes.

Bend over and say cheese!

Didn't John Liu once pledge to kyack in the Flushing River after it was cleaned up?
LOL! His political career got cleaned up first. Whose dick is he sucking see days...I wonder....to further any career he has left?

Spotted! The great whale, Moby Stavisky, in Flushing Bay.
Thar she blows ....anyone she can.... to keep the Stavisky dynasty alive.
That's what's stinking up the place!

That stench is the effluent (shit) discharged by CB7.
As soon as the FBI cleans it up with their subpoenas, maybe we'll see some relief.
Imagine Chuck Aoelian wearing an orange jump suit?
Will he be permitted to wear his toupee in a federal lock up?

In 1992, Columbia engineering professor Christian Meier wanted to use locks like canals, but ignored that when Robert Moses, another Columbia engineer, submerged the Flushing River for the 1964 World Fair, he destroyed the flow of Flushing Bay, making it stink. In 2000, Tom Campagna, the late chief engineer for the Borough President, announced Flushing River would be liberated and unburied and they would stop trying to call it Flushing Creek. What is funny is the same Robert Moses widened the Flushing River for the 1939 World Fair because he used boats to bring in the exhibits. But in 1964 he used trucks. Most of the flooding issues around FLushing would be resolved if they unburied the river and stopped blocking the underground streams.

This is just more political bullshit......both Peter Vallones pledged to rid the area of the smell and the army Corp of engineers did multiple studies. Julissa just looking for some votes.

Let's return to the old Dutch name of "Vlisingen".
As long as it remains "Flushing", it will always be associated with....well.....you know what.
As it is, Flushing is a self fulfilling prophecy, living up to its name.
The dirty politics that are being practiced here, doesn't help much either.