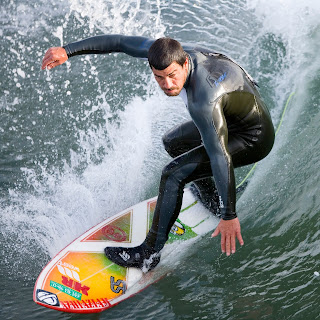 The growing popularity of surfing in the Rockaways has created a resurgence, attracting large beach crowds, fueling new businesses and generating other economic boosts.

But it has also made the two New York City-sanctioned surfing beaches, near Beach 90th and Beach 67th Streets in Queens, packed with wave seekers.

“Surfing has completely exploded, and we’re jammed into small areas,” said Conrad Karl, a local surfer and restaurateur. “We need to spread out a little bit. It would be safer.”

Calling the crowded lineups of surfers potentially dangerous, many surfers are pushing for a new or expanded surfing area, specifically along a stretch from Beach 66th Street to Beach 60th, an area that Mr. Karl calls “basically dead, going to waste” since it is closed to both swimming and surfing.

But, as it happens, the surfers’ campaign has collided with another explosion in the area: the infusion of hundreds of new residents into the vast Arverne by the Sea development along that same stretch of beach.

Many of its residents also want those beaches opened, but for swimming. The problem is that city officials forbid swimming and surfing in the same area, because swimmers and surfers could collide.
Posted by Queens Crapper at 12:21 AM

I thought the hipsters and surfers and newcomers were all the same people, no? The oldsters are all from the projects, right?

Is this the same development Helen Marshall began? Is it possible she got something right?

Hipsters don't buy homes on the beach. They pile up 4 to an apartment in a "gritty" part of the city to maximize their urbanity. But then being from bumblefuck, they can't help but do extremely white things like surf.

Again another situation of bad city planning and lack of accomidations. I find it phenomenal to see that resident homeowners are assembling to fight the self-entitled throngs of frivolous spending posers of Generation Gentrification, whose claims that surfing culture has revitalized the beach, which flies in the face of rational thought because there has always been surfing there way before they fouled it with their presence of faux bohemia bullshit and exorbitant bars and restaurants (or a mutant combo of the two). It's also good to see folks getting rightly outraged at those lousy restaurants overcharging for fast food because they are artisanal and decorative. Who do these cooks think they are, fucking Rembrandt?

It's obvious now that these assholes want it all for themselves, and how can they help themselves since the city (and state and the federal govt apparently, since its federal parkland) totally enables these people by selectively renovating parts of the boardwalk to turn a public beach into a resort area and yet another playground for the wealthy.

As for surfing it's kind of a joke, and I am a fan of it. But I have witnessed dozens of people, and who knows how much now, just idle on the water for vast amounts of time waiting for a wave to ride. And now the parks dept. has to hire hundreds more lifeguards to babysit these posers so they don't hit anyone else (do they even think of the kids).

That idiot from uma's and his transient patrons should be lucky its just the Averne community he has to deal with and not the gangs a few blocks east.

"I thought the hipsters and surfers and newcomers were all the same people, no? The oldsters are all from the projects, right?"

Averne by the sea is kind of like New Howard Beach (on the west side of cross bay blvd. for those not familiar). Which was temporarily submerged by Sandy a few years back. Which why all this devlopment high end and mixed use does not make damn sense at all. These people are really risking their livelihoods amd spending tons of money for insurance just to have pleasant views of sunsets. To each his own.

The people of Averne are right in this case though. These selfish surfers and their spokesman Karl must be stopped. If they want more room go to Montauk or their beloved Fort Tilden and let them be responsible for their risks.

"The waters are going to waste" ,shut the fuck up and share. It's for THE PUBLIC to use jerkoffs

Surfers are ALL assholes in my opinion. I never met one that wasn't and this is coming from a person who's lived in California and Hull By St.Thomas. I had many a falling out with these jerkoffs who think they are entitled to everything.

Once you let one in word gets out and you have 20 more. To add, these trust-fund jerkoffs dont work, behave like brats and will indeed take over a whole public beach in no time.
When I rented a beach house in Malibu on several occasions these bastards would be at it sometimes 7AM walking right up to the gate, unlatch it, come into my yard and use the outdoor changing shed & shower !!
Surfers my look cool on TV and in movies but are bad news in real life, -useless consuming bums!!
I hope the people of Arverne nip this tumor before word gets out. Then they will have surfers from all over the east coast squatting all summer long.

Hipsters and surfers are NOT the same people !!
A good 9 out of 10 Surfers are more like homeless, squatters etc. Yeah once an a wile you may find "a good one" making tuna melt bean sprout sandwiches at some seasonable shack but that about as good as it gets. Most are useless lax transients who "float around" only giving a shit about surfing & smoking weed.

Easy for Conrad Karl to say. He lives in Neponsit. Karl doesn't live near Beach 60th Street. He didn't shell out one million dollars for a home in Averne by the Sea only to find out he can't swim near his house.

Put the surf beaches right near Conrad Karl's house. Good Solution? No because he knows his neighbors would never stand for his crap. Deserted stretch of beach?

Conrad Karl doesn't go any where near Beach 60th so he should shut up and go back to peddling kabobs and watered down drinks.

Old timers in Rockaway are not just the NYCHA residents.

Surfers do things like work for a living while the project people live off welfare and what not. Okay, once in a while they get hired at HRA. But surfers do rent out places as clubs and across the board are really great people. They helped after the hurricane. The NYCHA scum looted and terrorized after the hurricane. Then put their hands out for more government benefits.


Yes there are black surfers but they are cool, employed and can afford surfing gear.

Anyone who uses obscenity with regard to surfers is stone cold jealous. Surfers are wonderful people.

Here is a real life hero surfer from Rockaway !

Anything is better than what the beach 60s is anyway so stop your bitching.. Can't eat fried foods and kool-aid forever...


I seriously doubt this, most the "surfers" people are complaining about are out all day even in the rain and stormy weather. They dont even live near the places they trespass on. The comment about "musicians" and all these nanny future alcoholics from Europe coming here to "piss it up" being working class is the biggest joke of all.
Big difference between some local professional who owns a surfboard and being a surfer. Most cops, firemen would punch me in the mouth if I called them a surfer.
Why do these surfers always call themselves "fitness or health consultants" when asked "dont you ever have work" yet can NEVER produce NY State certification.

I've never had a problem with a surfer in Rockaway, Long Beach or the East End. By most part they are just enjoying nature and the thrill of the next wave. Have you no passions that mean more than working 9 to 5 ?

Surfing is not the issue, it's the people using the hobby and the culture to annex a beach area with no consideration for the rights of a new community and even original residents to use the waters as they want. And did that big dummy Karl even consider that people east of 60st might want to swim too?

Because of the suspiciously selective phasing of the boardwalk rebuilding, I believe that they are interested in that particular spot because its virtually isolated and they might want to use it for all day and night parties akin to burning man festivals, but with lots of booze, these posers love to drink, a lot.

For karl and his patrons, it's not too late>>>

The surfers got my love when they helped us all after the hurricane. Yes, there is a need for surfing beaches but also for lifeguards at that stretch.

The big crime here is that we have BEACHES in NYC with no BOARDWALKs and NO LIFEGUARDs for anybody after every other beach impacted by Sandy is back 100%.

Woody refers to a car with wood panels.
One of the last ones made was the Ford Country Squire.

"Woody refers to a car with wood panels."

thanks for the meaning, talk about back in the day.