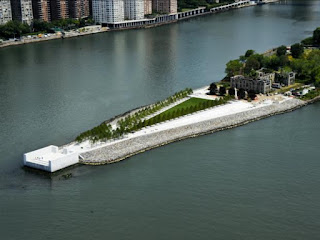 In a statement, a spokeswoman for Katz defended the funding for Four Freedoms Park, which will be used to improve lighting on the park's shoreline facing Long Island City.

"Four Freedoms Park is a beautiful memorial that honors the life and legacy of President Franklin Roosevelt, and stands as a universal reminder of the Four Freedoms that still ring true today: for speech and worship, from want and fear," Katz's spokeswoman said.

"The lighting will make it more attractive and enhance visibility from Queens," she added.

Check out the comments. They're great.

You see, dear readers, Katz's developer buddies have poured billions of dollars into development along the LIC coast and they deserve to have our tax money thrown toward a project that can be used to attract interest in their overpriced condos. Katz obliged. Every weekly newspaper and news website just copied and pasted her press release last week without analyzing it. This is how it works around here. And this is how these bozos keep getting elected.

If you want a good chuckle, check out NY1's story. It hits the nail on the head.
Posted by Queens Crapper at 12:04 AM

A peasant with a pitchfork said...

Demand Katz - her feet to the fire - to return to Queens the 300 G's. Everytime and everywhere she shows up until she relents. Rub her snot nose into her guilt.

I thought to save energy and protect the environment lights like these should turned off when the park closes.

Charles Park has no maintenance,the Riis Park grill area is a disheveled mess with rusty grills and lacks picnic tables compared to the el fresco upscaling by the bozo bazaar (talk about where the other half lives), all the sidewalks by and in forest park are cracked, and the as the recent post on CUJQ by Joe specifically shows the damage and neglect of 2 parks in Jamaica. And of course Flushing Meadows.

these are only a microcosm of the problem plaguing the parks in Queens. Maybe if our local news media would stop passing marketing and advertising artisanl barsteraunts, new apps, viral videos and hot neighborhoods as journalism they would notice this glaring abuse of government spending.

As for the predator developers lunatic interest in infecting their blade runner tumors in a potentially dangerous flood zones just to drum up irrational market rate values for their fancy but shoddy dwellings of high end blight, one should give a listen to Alicia Boyd, a one woman gang making it hard for the tower builders and tower people from spreading gentrification and mestetasizing the rest of Brooklyn Goddamn. She has interesting but obvious theories on the methods and concepts of these greedy sloths and the electeds who are enabling them,and they involve unsurprisingly, parks and views >>>>>

Thank you QC for calling this shit out.

Again, this DOES NOT answer the question or even how this is possible, since the money was earmarked for Queens Parks. As usual Queens Crap was the first to question this and bring it to the forefront. With the exception of DNAinfo and NY1, no one questioned this and the only reason those two did was because of this site, the only place you will find REAL issues.

Charles Park has no maintenance,the Riis Park grill area is a disheveled mess with rusty grills and lacks picnic tables compared to the el fresco upscaling by the bozo bazaar....


Charles Park & Riis Park, To the best of my knowledge, are Both part of Gateway National Recreation Area. and come under federal jurisdiction... If you wanna bitch about them call Meeks...

Katz did this to light up her re-election campaign.
She is a developer's courtesan (slut, if you prefer a stronger word) and will lie on her back for any $$$$$$$$$$$$ thrown her way.
And you who voted for her get exactly what you deserve, a tax increase.

Going by the picture, you think that Katz is trying to turn that end of the park into a Vegas showroom, maybe she's planning a one woman show there.

But the modus operandi for developers and the housing market is parks and views, and this allocation exemplifies this, for the only reason that it would radiant from a balcony of a condo or a suite.

Kudos QC, this is going to get bigger judging by the Queens Steamer's spurious response. The woman is an idiot.

Manhattan Borough President should have been required to spend an equal amount of money in Queens.

Don't worry about those condos: the big estates along the river were broken up from flooding, rats, and being in the middle of nowhere.

As long as you keep pressure on her not to spend money on bringing transportation to Vernon those buildings will not be built. Think of your streets and how bad they are. Why should you wait and have some developer jump the line?

And tell Transportation Alt and the Bike Nuts to go fly a kite.

Like that $10 million entertainment center for Astoria Park - do you think it for the locals? Or the multimillion ferry line to Old Astoria.

How are the parks in you neighborhood? The infrastructure? The services?

Have a problem? Hire a developer!

This is crazy, it's just wrong, wrong, wrong!!!
Why isn't this being take to a higher level. How dare she spend much needed Queens money anywhere than in Queens. Well Queens voters don't forget how she snubbed her nose at you and your parks!

Well, where are the community boards, the council people, the Albany delegation - there are a ton of people out there in politics in Queens and every damn one of them - yes, every rep in the borough, supports this. Not a single negative comment.

Charles Park & Riis Park, To the best of my knowledge, are Both part of Gateway National Recreation Area. and come under federal jurisdiction... If you wanna bitch about them call Meeks...

The Parks dept. does have some responsiblity for them, since they gave a bunch of hipster doofus event planners a 3 year contract at riis and Charles is a city park like everything else.

That is good advice to call our representative. Unfortunately, Meeks is too corrupt and untrustworthy that calling him would be pointless. But this gives me and anyone else a good reason to annoy him

Nothing for Fort Totten!? Those 100+ year old structures could be the foundation of an entire local tourism economy, with the BHS ready to lend the man hours, and Katz has the nerve to piss away 300K on Manhattan? What a political climbing developer's whore: hope this move haunts her wherever she goes.

The pols would be interested in Ft Totten only if a developer can make it into a theme park and gated community.

It looks like an old battleship cruising up the East River.
Everything is being named "Freedom this" and "Freedom that" these days.
If anyone complains they wind up being accused of being against "freedom".
WTF do Queens' voting sheep know about the sacred "Freedom"?
Not much. They are bound to become somebody in power's mutton dinner.

That is the way it works here. Somatized Queens is easy pickings for developers and their political buddies.
Some politicians, aside from being lawyers, are city council-developers' lobbyists.
Is that Kosher? Absolutely. The voters allow it by re-electing these crooks.

An example:
Do you really think that the Vallone law firm, which lobbies for developers, are interested in representing you?
Re-elect Paul Vallone and get reamed again!