The history of Jamaica High School 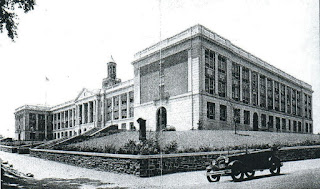 From the New Yorker:

As late as 1998, Jamaica held a respectable standing among the city’s large high schools. Though it was no longer the élite institution of earlier years, more than seventy-five per cent of the students graduated on time. But, by 2009, the graduation rate had tumbled to thirty-nine per cent. A confluence of events brought about the decline. In that period, talented students in northern Queens were given the option of attending two other high schools, both based on college campuses. In 1995, Townsend Harris, a magnet high school on Parsons Boulevard, moved onto the campus of Queens College. With roughly half the number of students as Jamaica, Townsend Harris had graduation rates that fluctuated between ninety-nine and a hundred per cent. During the eighties and nineties, Jamaica allowed students to enroll in courses at York College, a liberal-arts institution about a mile south of the high school. In 2002, York became the location of Queens High School for the Sciences, which granted admission based solely on standardized-test scores.

In 2004, in the name of greater choice, the Bloomberg administration revised the districting rules to allow students to attend any high school in the city. Given the realities of residential segregation, and of school quality as a determinant of real-estate values, there was something almost radical in that idea. It’s even possible to see the Bloomberg plan as a long-awaited response to Arthur Levitt’s claim, in 1954, that the problem in New York was not segregated schools but segregated neighborhoods. But it also meant that students whose parents—owing to language difficulties or work demands, immigration status or a generalized fear of bureaucratic authority—could not or would not pursue other educational options for their children found themselves relegated to increasingly unappealing schools.

The demographic balance that characterized Jamaica during my years became impossible to maintain. In 2011, the year that the city formally decided to close the school, fourteen per cent of the student population had disabilities and twenty-nine per cent had limited English proficiency. In the year before the school closed, it was ninety-nine per cent minority, a demographic that would not in itself be a concern were it not also the case that sixty-three per cent of the students qualified as poor.
Posted by Queens Crapper at 12:37 AM

The people who live over there have been raising their kids to be "thugs" instead of responsible adults. It's the parents fault if the kids don't go to school and learn. If my daughter fails in school then that is a reflection on me and my parenting!

I agree that if students are failing in school, the major blame goes to the kids and parents. I went to a public school back in the day that was not great by any means, certainly was not like Jamaica High at it's peak, but my parents made sure I did my homework when I got home (first thing I had to do), was involved with what I did at school and chewed by ass off if I fucked up or did something wrong. Today we always want to blame the school, but we are raising a bunch of undisciplined assholes kids who are raised by undisciplined asshole parents or parent.

Also did you notice in the article, the large percentage of kids who have problems speaking English (29%), that is huge. I mean if you are going to school in America, where ENGLISH is the main language, how do you expect to be anything except a dishwasher, Chinese take-out delivery boy or hanging out in front of a deli with a a beer in a bag.

Meanwhile ignored by the political elite who are instead agonizing behind closed doors on how to maximized the turnover of public amenities to private developers...

Many of those students who spoke no English were just off the plane and hadn't even ever been to schools ...or had been to schools only early on in their childhoods. These immigrant children should be given a great amount of credit for all that they accomplish in relatively short times when tossed into NYC schools! Imagine yourself being taken to a high school in China ... or, to be fair, to a country where at least the alphabet is the same as ours, Italy.

One cannot blame a school like Jamaica where the students registered as "over the counter" students.

Michael Savage went there. So did I. It was a great school with many Westinghouse science project winners. This was the Louis Schuker era. He was the principal in the 60's and into some of the 1970s. Minorities were maybe 5% of the student body. The building was very solidly built. I am sure it is still in good condition. The surrounding grounds and athletic fields were good back when I attended.
http://www.nytimes.com/1990/01/07/obituaries/louis-a-schuker-84-educator-figured-in-court-battle-over-flag.html

Many of those students who spoke no English were just off the plane and hadn't even ever been to schools ...or had been to schools only early on in their childhoods. These immigrant children should be given a great amount of credit for all that they accomplish in relatively short times when tossed into NYC schools! Imagine yourself being taken to a high school in China ... or, to be fair, to a country where at least the alphabet is the same as ours, Italy.

One cannot blame a school like Jamaica where the students registered as "over the counter" students.

My comment did not blame the school, my comment is about blaming parents. But whatever, if you do not speak the language of the country, you are going to have an issue, especially in the school system and when you have a high percentage of this, this affects the other students as well.

If these students are right off the plane then good. That much easier to send them back.

Not a pretty picture. Wonder if there was a lawsuit when another student was injured.

for starters I had great teachers in public school and HORRIBLE teachers. the worst of which was 70+ years old, slight dementia, and no control of a room full of HS students.
I would call this tenure.
the teachers' union is the cause of this.
NO ACCOUNTABILITY!
we pay pedophiles to read the newspaper in rubber rooms 'cause it is cheaper than trying to fire them. the word comes from top pass students & send them through.

Years ago we learned latin, greek, french, german, music, art, literature, home economics, shop, etc... and numerous other disciplines, in addition to our core curriculum of math, english, grammar and science (NOT COMMON CORE CRAP).
all that they do is teach to a common core test.
NOW the majority of freshmen college students need to take remedial English and math.
what a wonderful system.

and of course we now have the department of education, that has never educated one child. I did learn that President carter created it - that explains a lot.

They spent a Total of 140.9 BILLION OF YOUR TAX DOLLARS last year.

you can choose to kill your baby, sorry - i mean fetus, and PP will sell the arm and leg for an arm and a leg. NICE

AND YOU CAN NOT CHOOSE YOUR CHILDS SCHOOL.

Before you call the kids who were among the last Jamaica grads thugs you should know what you're talking about. I spent a lot of time in thr building over the last few years of Jamaica and I saw students and teachers alike who put in long hours to achieve,students who tutored kids in the other "better" schools in the building, kids who laughed and supported each other like family, and kids who dreamed and longed for a high school experience where the school wasn't closing around them (meaning losing favorite teachers, building space, and fewer "typical" high school experiences). They were - and are - great kids.

And for the record, I was told I'd be facing major violence when I attended in the 90s. Never saw any but my peers at other, supposedly better, schools did. You're citing reputation not reality.

There is no doubt blame to be spread but again, the majority of it is with parents and how they raise their kids, which obviously many did not do a good job considering the major problems of the student body at Jamaica High in the later years (exceptions: http://www.nytimes.com/2011/07/04/nyregion/a-failing-school-not-to-these-students-at-jamaica-high.html?_r=0). But to place blame on unions is not quite fair, but when a school has so many problematic students dumped into its system, how can it not fail. Sure NYC Board of Education is fucked up like most things NYC, but other public schools do well, but again is has to do with the student body. When a student body is as bad as a Jamaica High, then the school adapts to the lowest common denominator and that is of course bad for all.

Another thing to consider are charter schools (which are not as great as some think). Charter schools have become big business just like prisons and homeless shelters. Of course the more charter schools and kids in them, the more money, so why would NYC even care that much about the public schools, it is like they want them to fail

Lots of blame to go around, but parents are number one.

Jamaica died when stikers caused the deadly heart attack of Sam Newhouse and his Long Island Press died with him.