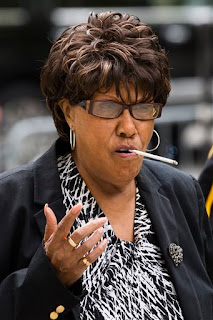 Former state Sen. Shirley Huntley, who was released from prison last year after serving time for corruption, is in trouble again.

Huntley, a Queens Democrat, owes nearly $751 in unpaid income taxes from 2012 to the state, officials confirmed. A tax warrant was issued by the state in December seeking to collect the money.
Posted by Queens Crapper at 9:21 AM

Not to make light of this (and I have been hard on what Ms. Huntley has done in the past), but really, there are not much bigger fish to fry that are actually holding offices in New York City right now. I mean come on.

Really, this is not even news worthy, when you think of all the actual REAL important news about all the bullshit that goes on in this city with elected officials and city agencies.

Seems like another look here, while hands go into deep pockets over there. Just more distracting news from the real issues of the day.

As evidenced by this latest story of yet another corrupt, dishonest, jailed and released, Queens politician of epic, civic and humanitarian fail, this piece of garbage reinforces how ALL Queens politicians are truly a total embarrassment to actual primates!

And, the murky waters of entrenched, failed leaders of grinding commerce and graft in Queens County just keep getting swampier by the hour---right up to the top corridors of tainted, Borough Hall power and abuse---and beyond, straight to Albany debauchery! And, the hardworking, taxpaying public be eternally damned!

It's official: Welcome to the new Queens gateway of the Fourth World! For tickets, stop by the quaint, subway train car Tourism Center on Queens Boulevard, for a guided tour of blighted, cultural wastelands and Fourth World beggary, obscurity, quiet desperation and peasantry---and hold onto your wallets---crime is as rampant here from within, as well as outside of Borough Hall!

Is she running for her old seat again so she can make some money to pay her taxes?

She should get an internship at the Clinton foundation to learn the right way to run a "charitable" organization.

She always has the option of checking into the new homeless shelter.

Aunt Esther never had a ciggie dangling from her lips. I wonder how many wigs this crook has?

Is that really a man hiding under a bad wig?

Just looking at this heinous photo, and what tragically passes for the image of a public servant (with a dangling cigarette from her sycophantic lips, no less!), is an experiment in epic shame, dishonor and disgrace, especially at how low, below gutter and unaccountable our Queens representatives have devolved to (with the rest of the city and state---and beyond!).

As I have previously stated: Welcome the the new, official Queens gateway to the Fourth World!

I gave her $15 bucks once on Farmington St in Flushing
For food of course, what were you thinking ?

Tragically, we are overrun by a sociopatic, criminal enterprise in all local, regional and nationwide politics, where the politicians themselves are a scourge that even all worldwide chapters of organized crime (and the families that still run them), couldn't possibly rival with any heft.

And, just when I think that corruption, graft and Neo-Fascism can't get any worse in Queens County (as with the rest of New York City and State government), it completely trumps reason and sanity---every time!

Just wait, then for the next round of societal collapse and anarchy---and watch these unethical, uncaring, voracious, pathological thieves blame their hijacked constituency for all of the social ills, crime, lawlessness and vigilantism that they themselves have infected everyone with at the very breeding points of their utterly, shamefully, brazenly false, fake and failed leadership that is tantamount to all treason itself!

Another triple shot from Mr. Iritano....YAWN!
Ya lost us Richie in your rambling rhetoric.
Might you please undertake an effort to be more concise,
Thank you.so as you may reach more people with your messages?

Alas, I am so glad that no one is forcing you at gunpoint to read anything, Anonymous---least of all what I've posted, that took my four-year-old nephew only two minutes to read and comprehend!

For all of the profoundly afflicted, attention deficit disorder types like yourself, Anonymous, please stop wasting everyone's time to personally attack and criticize anyone else's First Amendment rights---and CHOOSE to abstain altogether from reading what is too difficult for your brain to marginally process.

And, here's a triple shot for you, sleepwalker---go back to sleep for another decade! By the time you awaken, you'll be begging for the merely garden variety type of hustle, over which a former public thief like Shirley Huntley has disgracefully dishonored her own name, while betraying public trust with impunity!

Your big sleep awaits, then (again and still)!