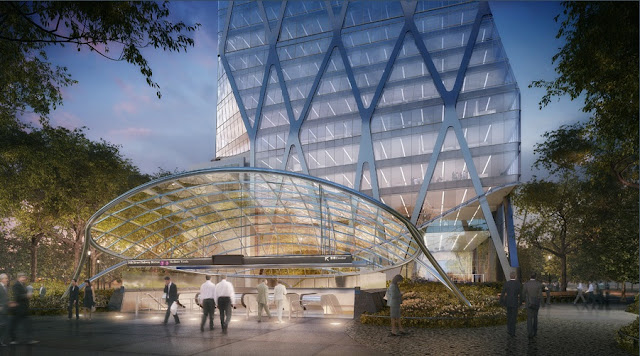 The MTA has announced that it will be opening its highly-anticipated 34th Street/Hudson Yards stop on September 13.

The stop is about a mile from the Times Square-42nd Street station and is located at 34th Street and 11th Avenue.

The station has been built where the giant residential and commercial development–Hudson Yards–is going up.

“We want more people to be taking the train around that area, so that area can develop,” according to an MTA spokeswoman.

Despite the addition of a new stop, the MTA does not expect that it will lead to any additional congestion on the train.

“We believe the 7-line has the capacity [to handle the new riders],” said a MTA spokeswoman.

The MTA said that the new stop will not affect current service, and that the added ridership will not lead to delays.

However, State Senator Michael Gianaris said that the additional ridership may cause problems in western Queens.

Gianaris said western Queens is already in need of increased service. He said that the No. 7 train needs to run more frequently and that there are already too many delays.

It's nice that the MTA is more into helping out developers than helping riders.
Posted by Queens Crapper at 9:00 AM

The service interruptions on the 7 train the majority of the time happen between Manhattan and LIC. Betcha they'll keep the Manhattan side running without delays. Can't annoy the newly arrived hipsters. 34th street to Grand Central...no delays.

Clearly they didn't finish the article. It should have said:

“We believe the 7-line has the capacity [to handle the new riders],” said a MTA spokeswoman [who has never ridden any MTA trains in her life].

People stand on the platform and let trains go by because they're too crowded to get on, and this woman really believes there is room on the train?

I wonder how many days it will be before the escalators stop working?

Why must the station be an expensive behemoth rather than a normal station? Doesn't the rest of the system need some help?

How long before it begins to smell like a urinal in a dive bar?

"how many days it will be before the escalators stop working"

I give the escalators 2 hours opening day and that's if they are working at all. All these "new people" dont know what the F_ they are doing and this Canadian & overseas built equipment is JUNK just like these new La Pocatiere Bombardier subway cars. The layout is lousy and they hold 1/3 LESS passengers as the old 60s Bluebirds & Redbirds that ran forever !! I wonder how big the "kickback" was on that contract.

The MTA is a joke. Paul McCartney's wife was on the board until she got married.
Wonder how many times she used it's trains and buses?

2 corrections to some of the points here -

Crappy the MTA didn't pay for this expansion - City Hall did. This was part of Bloomberg's resurrection of his failed Olympics bid. City paid for the expansion to help the developers out. We don't elect the MTA board but we did elect Bloomberg.

Anonymous #4 & #7 - The escalators were already not working! That's why it took an extra month for the station to open.

The MTA is funded by City Hall and Albany.

Glad I live two blocks from an LIRR station and can bypass the great unwashed vibrant bustling diverse riders of the #7 line.

Although I detect snark there in your on point comment. I will state the obvious. It will be the usual blade runner glass monolith 50 story tumor development. There are already 3 tumors that have been erected with surprising speed, one looks exactly like the freedom tumor one wtc which looks like a giant syringe from a distance.

A pity that there's no station where one is actually needed at 10th Ave and 41st Street.

The city expected that local developers would fund the station's construction and neither side yielded until all the deadlines passed. So we're stuck with station that will likely be the least used in Manhattan.

The Javits Center was already obsolete when it was completed and the biggest events cannot be conducted there. Many events which can fit avoid the locale as well because of its obscene labor costs.

Believe it or not, I wanted to soak up some real writing experience.
So two of us took a "shape up" job with United Expo at the Javits Center in the late 1980s..."On The Waterfront Style".
We learned from our fellow workers that the center was sinking....maybe an inch every 5 to 8 years...I think one of these guys said.
There was always water dripping somewhere in the basement levels, that I noticed. That's what I originally asked a worker about.
Does that mean it will be rebuilt someday? Of course. At great expense putting money in a lot of political pockets.
Hey...I did my job...got my $250 for the day and chalked up a great memory...
but I was always a little apprehensive about being under that vast canopy of glass, should there be a structural failure.