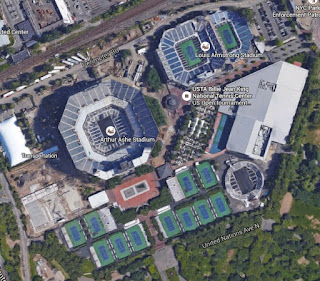 The newly-renovated USTA center in Flushing Meadows-Corona Park is set to open later this month, but so far none of the $10.05 million promised in a 2013 deal with the community has been paid out, DNAinfo has learned.

The money was brokered as part of a community benefits agreement in 2013, before the city council approved the expansion of the tennis facilities inside the public park.

The USTA agreed to pay $5.05 million to fund programming and upkeep at the park through a new alliance for Flushing Meadows-Corona Park and $5 million to the Parks Department for the relocation of a road — but the conservancy, which was suggested by local community boards and Councilwoman Julissa Ferreras, hasn't been formed yet, officials said.

Interestingly, about the time this news broke, I received this:


Hi Crappie, Sunday I went to the festival in Flushing Meadow Park and was disgusted with the condition of our largest and most used park in Queens.The main viewing area along the lake where all the corporate tents were set up was just horrible.The Park Dept. did nothing to beautify the area,there was litter and debris in the water that was there for a long time and could have been easily removed before the event.I stayed for the whole event and not once did I see a Park worker picking up trash along the water's edge.

I also took a bike ride around the lake and went all the way to the Promanade by Flushing Bay and the roads are horrible,lots of pot holes and uneven pavement not conducive to good biking and down right dangerous. There are no signs marking bike paths and no signs warning cars to share the road.Some of the roads in the park are just service roads to the Grand Central especially around Citi Field and the Tennis Stadium and cars are moving fast and furious.

With all the big events that are held in the park and all the multi billion dollar stadiums and their mega rich teams you would think we would have a park that would be up there with Central or a Prospect Park. Instead we have a park where we have a crumbling NYS Pavillion the city wanted to knock down.We also had the Gertrude Earle Aquacade that was from the 1939 World's Fair and had seating for 10,000 people and was demolished and replaced with a Gertrude Earle Café that I have never seen open yet.

Maybe a mega mall in the park might be just what is needed to make this a world class park. Only kidding.

Posted by Queens Crapper at 7:32 AM

This is Queens. We are used to shit. We are used to getting more and more shit.
That is what we will continue to get because we keep on electing shitty politicians who are advocates for big money...a small percentage of which winds up in their campaign coffers. They get bought for chump change and we get the royal screw!

Queens continues, it seems, to get exactly what it deserves...shit...shit...more shit....topped with crap!
Our elected officials and local community board crooks do their best to have us voters believe that this shit topped with crap Ian really an ice cream sundae. And, if we behave, they will drizzle our sundae with some urine.

Sound gross? You bet! But that's what you get if you do not become involved. Queens is sleepy time because it's voters are always snoozing when they should be demanding their lazy pols work for them instead of themselves.

How does it feel to be a two dollar whore who was promised ten bucks for getting screwed, then wakes up to find nothing left by her client on her night table? That is what just happened here. We all got screwed for nothing...not even peanuts!

I work as a contributing photographer for one of the Queens weekly"s, and pay close attention to what's going on in Queens, especially around the Meadows, parks, overdevelopment in Flushing etc. I have had my personal issues with Crappy, but still subscribe because it is informative if not sometimes polarizing. Regarding the first commenter about the Dragon Boat Festival from Aug 8,9. Having photographed it for a number of years now, the shore line and sidewalk walkways were in reasonable shape as recently as last year; not pristine, but approachable for fans, observers and teams to get close to the water to cheer on their rowing compatriots. THIS YEAR it was a bloody shambles, with the concrete all broken in many spots, shoddy fencing erected to keep people back and basically a pig sty. I couldn't get the photos from the lake shoreline I had in previous years. As the festival has grown, the Parks Dept service has shrunk. WHAT THE FUCK DO THEY DO AFTER ALL??? And while I am at it, another boondoggle in the making is being foisted on sleepy, unobservent inactive Flushing residents about the proposed Mawlization of a socalled plan to confer a pedestrian plaza in the juncture of 156th Street and Roosevelt Ave, where a public library is next to a former McDonalds, now another mega Korean BBQ Joint. This is nothing but a god damned ploy to cede yet more space to voracious Korean interests. Where the Fuck is Ron KIM? AWOL? It fell to Tony Avella to express outrage at the secretive DOT plans and it is not even his district. If enacted this so called plaza would be another takeover of once public space by scumbag Korean interests. You'll see, not tables and chairs but squatting bagavonds selling vegetables, shoes, clothes and all manner of shitty usage, once they have their claws into the closed street. Flushing is already a defacto Chinese Colony, How much worse will be allowed to keep piling on to the misery.

Does anyone know if the Unisphere fountains are ON or must we wait for the invasion of a'O tennis freaks & cameras ?

I think you mean Gertrude Ederly. She was the lady who swam the English Channel....lived in Flushing.
Of course Claire Shulman saw that the Aquacade, which honored her, was torn down on some lame excuse.
There ya go again....the borough presidents of Aueens are the ones who foster the obliteration of its history.

I've seen park attenders piss in that fountain.
Introducing the "Golden Shower Unisphere"!
This is Flushing. It has been flushed down the toilet
by third world slobs.

Regarding Leonard Square....a war dead memorial being annexed by Koeans.
Don't blame a group for trying to do something. Blame your politicians for allowing it.
Guilty are Paul Vallone (it's not even his district) for getting the funding....Toby Stavisky, blowhard phony....Peter Koo....WTF does he do anyway besides flashing a clueless smile? Who can ever understand his Chingrish when he speaks?
You voters are the guiltiest of all...for believing Vallone represents you. You have been FUCKED in the tookas...real hard by this perennial liar!

The Stavisky's took money from the notorious Tommy Huang...under the table...unrecorded.
Most every Taiwanese -American old enough to have been around in the late 1970s knows this.
That phony act that the late Leonard P. Stavisky used to perform...about investigating Huang was just a cover.
Where does that frump Toby get her money? You betcha! A lot of it from a Taiwanese money laundry.

Can you blame Queens native , multi millionaire Paulson , for donating $100,000,000 to the Central Park Conservancy over FMCP?
The crooks that run FMCP would have squandered half of it away in two years.
Even Paulson knew that Queens deserves shit. A savvy businessman does not contribute to a money pit like FMCP.

The only real time that FMCP is on anyone's radar is during the US Open.
The "high class" tennis fans converge upon it like locusts. When it's over they make a bee line for home.
They don't want to spend an unnecessary hour in Queens, the bung hole of New York.
Yes, let's encourage tourism. Do we have any real attractions? My 20 power spy glass can't spot any on the horizon worth a damn.

Shit, shit, shit....all around Queens.
That's why this site is aptly named , "Queens Crap", in case you haven't noticed!
Then you've got the crem de la crap crew of small time crooked politicians.
That really tears it!

Whose responsibility is it to collect the promised money?

It does not matter. When anyone sees this money it will have dwindled down to ten cents on the dollar.