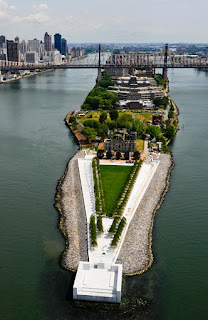 A group of investors led by Rudolph Giuliani's former chief of staff is proposing a multimillion-square-foot development near the Queens waterfront — a mixed-use project that would include a pedestrian bridge connecting Long Island City to Roosevelt Island, POLITICO New York has learned.

Three sources briefed on the plan described it as the brainchild of Bruce Teitelbaum, who has quietly been presenting it to people in recent months.

Teitelbaum hopes to build a mostly residential tower comprising at least one million square feet on a vacant lot north of 44th Drive, along the north south side of the Queensboro Bridge. The site, at 44-02 Vernon Boulevard, is currently owned by Vernon Realty Holding, L.L.C. according to public records; it is zoned for residential use and takes up 128,332 square feet on one lot and 84,338 square feet on another adjoining lot.

But Teitelbaum is likely to apply for a rezoning, and possibly try to purchase an adjacent lot owned by the city, to expand the project's footprint. The more ambitious plan would entail a host of other amenities, including open space, affordable housing and possibly a public school and a hotel, the sources said.

The bridge is envisioned as something akin to the High Line — a path for pedestrians and cyclists with views of Manhattan's skyline and space to sit and unwind. On the Roosevelt Island side it would land near the site of Cornell Tech, the applied sciences school that will dominate the south end of the island.

Oh, you mean just north of Four Freedoms Park? What a coincidence that the borough president threw money at a project that people living in this luxury condo development will have a great view of!
Posted by Queens Crapper at 12:29 AM

The real purpose for that "bridge" is to attract high- income workers from the Cornell project to Mr Teitelberg's housing project and hotel. LIC is fast becoming saturated and overbuilt.

Why does land have to be purchased from the city in order to build a public school?

@Anon - If they are walking across the bridge that means they wont be driving to work or taking the subway. I am fine with less crowding.

Walking across the bridge? They're too entitled for such lowly activities. Maybe Uber will start a sedan chair service.

@Anon - If they are walking across the bridge that means they wont be driving to work or taking the subway. I am fine with less crowding.

And how many days in a year do you feel like walking over a river? Most of the time it will not be fun. The river is a lot wider there than lower Manhattan.

Its like the ferry boat and bicycles as a significant form of commute. Ain't gonna happen. This is not 1915.

But there is already a bridge that connects LIC/Astoria to Roosevelt, I have taken my bike over it, why spend money on another. Or is that too far for the elite folks.

"But there is already a bridge that connects LIC/Astoria to Roosevelt, I have taken my bike over it, why spend money on another. Or is that too far for the elite folks."

Yes, we will have the regular bridge and the special bridge for the 4000/month apartment renters. Reminiscent of the recent housing developments with the main front door and the side door for the subsidized low life.