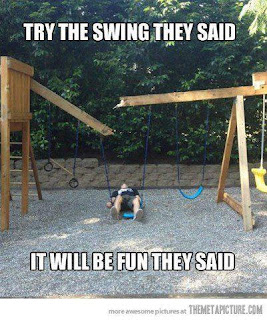 According to a database of work orders obtained through a Freedom of Information request, 197 "immediate attention" work orders stayed open for more than four months between March 2014 and March 2015.

An analysis of the work order database shows, on average, it took the city 36 days to close work orders for problems labeled “immediate attention.”

In January, a Parks employee drafted a work order to repair “protruding sharp edges at the top of fences” near two swing sets on the Conch Playground in Far Rockaway. Although the hazard was labeled “immediate action,” the I-Team found jagged metal points still sticking out from the fences more than 200 days later.

Earlier this year, New York City Comptroller Scott Stringer issued a “ClaimStat” report showing a 53 percent increase over the last decade in playground-related lawsuits against the city. The claims --often over trip hazards and broken jungle gyms -- cost taxpayers more than $20 million in settlements and judgments.
Posted by Queens Crapper at 1:10 AM

I see parks employees smoking, talking on cell phones, and shooting hoops, while their truck is idling away gallons of fuel.