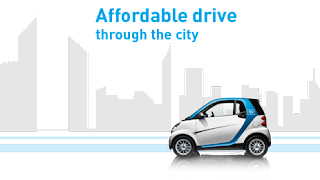 As residents of Brooklyn and Queens know all too well, not having a car makes it difficult to get from one borough to the other. Buses are maddeningly slow, most subway lines require a detour through Manhattan, and a cab or Uber quickly becomes expensive.

"I have friends who live in Astoria I don't see because it's hard to get there," said James Bednark, who works in television production and lives in Prospect Park South, Brooklyn, only 13 miles away.

Soon, however, there will be another option: hopping into an unnervingly small, but surprisingly roomy, two-person vehicle and motoring to the other borough, where the rental ends once the driver parks.

On Aug. 29, Car2go, a car-sharing service that launched in Brooklyn last October, is expanding to Long Island City and the rest of western Queens.

The move marks a critical step in the so-called sharing economy's transportation segment, which once seemed a pipe dream of environmentalists and now includes such mainstays as Zipcar and Citi Bike. With its fleet of Smart cars that users can locate, reserve and open with a mobile app, Car2go could complement the transit system and help fill a hole in the way people get around.

Or it could just bring more congestion to neighborhoods where it's already hard to park.

And at least one city council member wants to dedicate street parking spaces to these cars.
Posted by Queens Crapper at 1:17 AM

Dedicating spaces to this is ridiculous. Everyone who drives in this City should have the pleasure of looking for legal parking.

I would never share a car ride with other people....I don't even take cabs any where because I don't want to be driven around by a terrorist! So they can keep this car sharing business!

You don't ride in the car at the same time, genius. You take the car where you need to go and someone comes along and takes it after you park it.