Mayor quite dense at being transparent 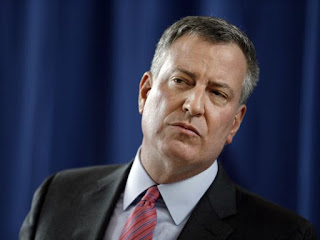 Mayor Bill de Blasio, who promised to run the most transparent administration in city history, has taken steps to have his office review any public records request of any city agency that could "reflect directly on the mayor."

That broad mandate, outlined in a May 5 email obtained by The Associated Press, could give de Blasio's office control over virtually all newsworthy Freedom of Information Law requests from journalists, watchdog groups or members of the public.

Although the ramifications of the policy are not yet clear, transparency advocates fear such control could lead to prolonged delays in responding to records requests, a criticism both President Barack Obama and New York Gov. Andrew Cuomo faced when they instituted similar policies.
Posted by Queens Crapper at 12:32 AM

When you get right down to it, what isn't he dense at?

He learned transparency from the Sandinistas and Castro brothers

REBNY hired themselves a nice puppet to manipulate to their agenda.
Big real estate runs New York. Just look up Der Wilhelm's campaign contributors....NYC Board of Elections.
The deveoper's pull der mayor's strings and old bobble head nods to their desires.
Unless he is a hand puppet. Then you bet that some real estate biggie has got their thumb up his ass.

He's doing a good enough job of making himself look bad. Freddom of Information documents won't do much to make him look worse!

That mandate is so broad that it practical covers every request. Quite a turn from the public advocate who aggressively criticized Bloomberg's response on FOIL. Did anyone believe he would actually do better?

Alas, when there is no trace of honest, ethical leadership (that leads by example) at the top, then there can be no credible expectation of any type of leadership whatsoever in the middle and bottom, which is now languishing in the deepest wells of adversity, beggary, deprivation and obscurity that now seems quaint by comparison, when Michael Bloomberg was mayor (and I don't advocate for his deeply flawed, incompetent, elitist record, either)!

I never thought that there would be a modern day, City Hall administration that could rival the century old, corrupt and crooked days of Boss Tweed's Tammany Hall---and, here it is---and getting worse by the hour!

These guys, Obama, DeBlasio etc... Are like the dog chasing a car.
Once they catch it, they have mo bleepin' clue what to do.
They revert to their core philosophy
" The ends justify the means"

The mayor is dense...period!
Maybe the wizard will give him a brain.
Maybe the meds he's taking for his mental illness fuzzes up his perception.
Always tardy? C'mon bill is taking sleeping pills and more.

Maybe you are right. He shire looks drugged in this photo.

I don't think he's been to any community civic groups in Queens.He doesn't like to be questioned at his press conferences it seems to get annoyed or just ignores a question he doesn't like.This guy acts like he is above all the little people and that his policies are not meant to be questioned.
Bloomberg attended at least four Juniper Civic meetings and was never afraid to state his opinion at a question at a press conference and he at least had something of a sense of humor.Bill is bland.

This is the face of a tired, worn out , lack of control mayor.
He looks like he's sorry he took the job.
He was never even a good public advocate.
His Lady Macbeth wife pushed him into it...I'll bet.