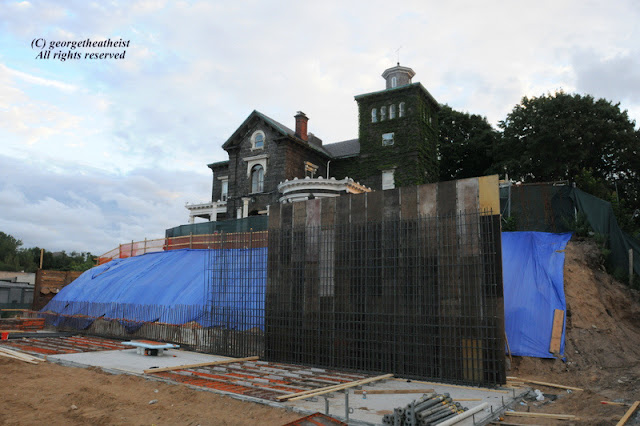 From George the Atheist
Posted by Queens Crapper at 12:23 AM

Nice!
Maybe a plaque should be applied to that wall..."Cosponsored by GAHS, for remaining silent while the site was pillaged".
Still not a peep,from that venerable organization.

The "Berlin Wall" comes to Queens

I am sure that there will be a "peep" shortly, to defend what GAHS did or did not do?
Oops....excuse me! They were extremely adept at hiding behind Friends of Steinway's skirt.
Let's face it folks, historical societies are useless. They can only gather and catalogue photos, maps and artifacts to gather dust in their hallowed halls. Occasionally, they mount a few exhibits worthy of attracting an audience,
They are navel gazing experts....impressed with their own importance.
A couple are audacious enough to think that they have any power at all beyond their academic clutter.
The truth bites, doesn't it?

Yes, the 11 warehouses are already sold:

Great job, George.
You are earning your pay creating this photo chronicle of abuse.
Meanwhile borough president Melinda Katz sings in Forest Park while this wall is going up.
Is there something wrong here?
Shouldn't she be caring about our borough's pride being pissed on?
As long as she gets her $$$$$$$$$$ from developers, her campaign coffers will be enriched.
Then you voters can re-elect Ms. Alley Katz.

Nice! Maybe a plaque should be applied to that wall..."Cosponsored by GAHS, for remaining silent while the site was pillaged". Still not a peep,from that venerable organization.

Have you have not been to their website for five years, read no newspaper in Queens for the past three years, been on the internet for a few years, or been to a half dozen meetings in their space about this place?

The only people silent in this are the Astoria politicians.

You are earning your pay...

Jerry, thanks, but it's all "pro bono". We actually lose money doing this. This is pure amateur (honorifically speaking) historical activism,

BTW we heard from an insider that the Halberian heirs were offered over 3 million for the entire property by a Tibetan religious organization. The then asking price was around 4-5 million. Insider said the offer was turned down and later the property - house and grounds - was sold at 2.6. Would you surmise that the heirs kicked themselves good? Ah, gongs and chanting up on the hill would have been nice and peaceful (and incense to ward off the sewage plant stench to boot), but instead we all get this. Rumor has it also that a Talmudic academy made inquiries.

(The Queens Crap site is s-o-o-o educational ...and informative.)

One possible way out of this metaphysical disaster: all interested parties come together - the Loria lawyer owners; Caliendo, the architect; Greater Astoria Historical/Friends of Steinway Mansion; area politicians; community representatives; the press; et alia. (John Paulson, owner of Steinway & Sons: are you reading this?)

Level the tops of the warehouses and put a world class green roof over them.

The "cutting edge" in Queens. Anyone up for the challenge?

I am sure that there will be a "peep" shortly, to defend what GAHS did or did not do?
Oops....excuse me! They were extremely adept at hiding behind Friends of Steinway's skirt.
Let's face it folks, historical societies are useless. They can only gather and catalogue photos, maps and artifacts to gather dust in their hallowed halls. Occasionally, they mount a few exhibits worthy of attracting an audience,They are navel gazing experts....impressed with their own importance. A couple are audacious enough to think that they have any power at all beyond their academic clutter.

If I wasn't busy doing other things, I'd straighten this disaster out.

Ladies and gents step right up and take a gander at these Mansion Mooks forever immortalized in the annals of social media:

Philip Loria, an owner of same.

They are not the root cause of this, but an example of the toxic public environment that intrudes into our lives in far too many ways.

Define what that is and the true culprits become clear.

Bub....I have been to GAHS's website numerous times. Very self promoting. A website does not substitute for activism!
As far as expressing any outrage over Steinway....they have merely pulled their punches....feigning criticism.
Can't upset any funding sources. Tow the mark and tone down your rhetoric.
I call that SILENCE...cowards hiding behind Friends of Steinway's skirt.
Continue collecting your ephemera and filing it properly for future publication.
This is a society of words and pictures with no real action.
It is far easier to save an old photo in an acid free envelope than it is to stand in front of an endangered historical site
with an assembled group and speak out loudly for its preservation.
Armchair historian is what most historical societies are.

Been there. Done the same too George, with the RKO Keith's.
I fully understand the freebie hard work. I laid out plenty of money too.
Still, figuratively speaking, you earned your pay. Good show, once again!
To accomplish anything we must all become active rolling stones.
A couch potato gathers moss.

It is far easier to save an old photo in an acid free envelope than it is to stand in front of an endangered historical site with an assembled group and speak out loudly for its preservation.

WHERE ARE YOU IN THE PICTURE?

Disgusting! What kind of erosion control does that soil under the blue tarps have for when the tarps are removed?

The Ghost of Newton Minnow said...

Get an education. There's nothing on TV tonite. So, spend 1 hour watching Mike Halberian, William Steinway, and Bob Singleton explain to you the significance of the Steinway site. Well worth watching. Part 1 here. (Be sure to check out the other 3 parts as well. Your total time: 1 hour commercial free!)

Make all the documentary programs you want about any site's significance.
This is after the fact. History books are full of..tsk, tsk, tsk...look at what used to be here.
The Steinway site has been destroyed. All the bemoaning, crying and docu-dramas about its importance mean little now.
Sorry Mr. Singleton & Company. Good try though.

Does anybody even remember who Newton Minnow was?
Why choose such an arcane handle?
Just for informational purposes he was the chairman of the FCC back in the early 1960s.
He coined the phrase about TV being a "vast wasteland".

Whoopsie do! I'll watch it.
Too bad ten years back nothing was done to buy out Mike Halberian. He was looking to sell the mansion even before that.
That was the time to find a buyer instead of going the usual political route.
Now we can watch some recorded history about the mansion in place of its glory.
Yawn! Sigh! What a damn shame it had to come to this.
I hope any of the crooked pols who might be following all this are as embarrassed as I am to be living in Queens.
I sincerely doubt it, though.

Bravo!
Documentaries and historical programs are an excellent means of making the public aware of the importance of preserving Queens' rich history. Maybe they can even convince some thick headed politicians to take a good look at what we've got.

I once co-produced, in conjunction with the Queens Historical Society, a (rather rough) half hour documentary for QPTV back in the early 90s which highlighted the plight of the historic Flushing Keith's Theatre...."Historic Movie Palaces of Queens".
It even managed to win a city wide competition in the documentary class, and received a CAPA (certified access producer's award).
Though not exactly an Oscar, it did its job educating. That was the only purpose for which it was intended.
It ran for about two years and was picked up by Paragon Cable in Manhattan.

Nevertheless, it did not make a dent in the mind of borough hall (Claire Shulman in particular).
We all know what shambles the RKO Keith's lies in today.

Maybe it was already too late for the Keith's to have a meager half hour film do its work to save it.
Education must begin very early, otherwise these films become obituaries.
These kinds of films are extremely important to be made, even after the fact. Now, they can even be released online to reach more modern audiences. This is the way of the future to broadcast your message to thousands or millions.

Until the attitude of borough hall can be changed from supporting development over history, we will be losing more of our historic sites.
Plunder instead of preservation, for the benefit of political agendas, is no long term solution to properly running a borough.

Until we acheive a balance between intelligent development and the preservation of historic sites , Queens will continue to be a sorry mess.

It's up to all of you. I have done my part for nearly a third of my life. Never give up,a worthwhile goal.
I continue to do my part where I feel it will be most effective. The mere existence of historical societies do not guarantee against the loss of future historical sites.

Queens Historical Society deserves the lion's share of the blame for Steinway's destruction. They seem to feel that their name alone guarantees activism. LOL! I have never seen a more inactive bunch. They are always afraid to become active because borough hall might cut off their grant money. It seems to me if you are taking the name QHS you should be doing something real about saving the historic fabric of Queens outside of your musty archives.

SHAME ON YOU for doing as little as possible!

Where is our borough historian's outrage RE Steinway? Not a peep out of that Jack ass!

Dr. Do-little....Jack Eichenbaum, our burro historian, is the laughing stock of NYC's other real borough historians.
He is a joke. He and Queens both deserve each other. Like a senile old prince, he enjoys his title and uses it to promote his boring error filled walking tours.

But isn't Dr. Jack-off just what borough hall ordered...a mild mannered doofus that will not buck their game plan to overdevelop Queens?