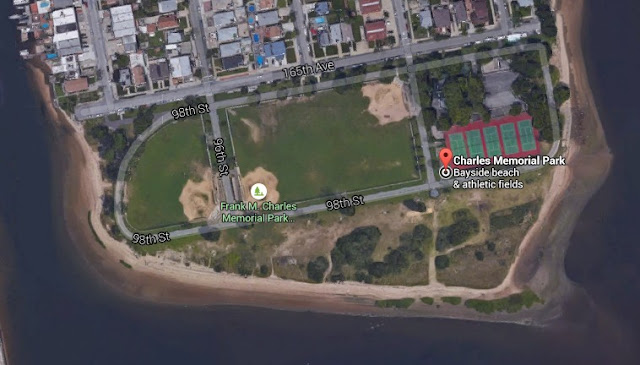 Hi "Crappie, last week I was at Charles Park in Howard Beach and I saw a group of about 10 National Park Service workers with clip boards and cameras looking over the park. I was on the beach doing a cleanup of trash and they called me over to chat and take my picture. I proceeded to complain about all the trash and debris that accumulates on the beach and that there is no one who's job it is to keep it clean. Only for one summer they had a worker that would clean the beach each day but after Hurricane Sandy he was reassigned to the Jamaica Bay Nature Refuge.

I was told by one of the officials that they are looking for volunteer coordinator's to organize the community and would I like to be that person. I told them the job shouldn't be left to volunteers and that it should be the job of the NPS to keep the park clean. He said that there was nothing in the budget to hire a worker.

I then asked him that the NPS and NYC Park's was supposed to join up and help each other out with all the parkland NPS has and he said NYC Park's can't help they have more than they can handle. He also said many parks even Central Park depends on volunteers to help keep it clean.

My thoughts are that here in the USA there are many people out of work and we are spending billions on all kinds of projects and sending billions of dollars all over the world to nations that hate us and we can't even afford to clean a park in an affluent neighborhood like Howard Beach where families come to rest and relax.

Each day the tides bring in trash from boaters and what winds up in the sewage system. Each day fruits, vegetables and food is washed up from Hindu religious ceremonies. Each day people who fish and party leave behind beer bottles and trash. Just as the NPS has to clean the bathrooms and sweep the playground and empty the litter baskets they must clean the beach. Some of the debris on the beach includes sections of heavy boards from docks and have nails and bolts sticking out. They are a hazard for beach goers and to boaters if the debris is washed out with the tide.

I personally don't like to sit and see trash so I always like to cleanup my area and have taught my children to leave a park a little cleaner than you found it but this is a big dirty job that shouldn't be left to a few volunteers that will do periodic cleanups." - Rich
Posted by Queens Crapper at 12:01 AM

This problem has been going on for DECADES!

Look, they got rid of the staff and organized all those East Rive groups to do their work on all the East River Parks. Yet another example of hollowing out our infrastructure to provide resources for development.

The city seems really silly about expense budget but act a bit like the Library Board when it comes to capital projects (half million for a dog run - you insert your favorite). I wonder if there are kickbacks in capital.

The mayor stopped requiring single unemployed homeless men to clean up the parks/highways/streets for their checks because he thought it was too demeaning.

Why didn't the Queens Steamer allocate about 120,000 for a couple maintenance jobs and a vehicle?

And how come, and I am sure of this, there is no enforcement by the broad channel rest stop and recreation area? I believe that is where the majority of that garbage is coming from and washing up by Charles. In addition to the usual tons of bottles and wasted food there are discarded tiki torches. If they have their parties by the water, fine. But clean your shit up. These people are jerks and are pretty disgusting.

It is a bit peculiar that Charles is suffering with neglect, I doubt you would see such ugly sights by areas like Brooklyn Heights or Dumbo (Jerry Seinfeld had a funny joke about the name, they added the O because nobody would want to live in Dumb). I haven't been in Howard for a while,but I recall it was pretty much majority republican. Maybe it's some partisan bullshit reason that the park isn't getting funds.

It's a damn shame. Despite how affluent the town is, it's still in South Queens, which is the leper colony of the borough and treated as such.(except Rockaway between 89 and 105, but that's another fucked up city planning story)

I was at the park today and was astonished at how dirty the beach was. Pans from bbqs floating on the water. Bunch of fruits all along shore. Stupid fake flowers on the water and along the shore. My as long call this place orchard beach. They need to clean this place up! Its really a shame.