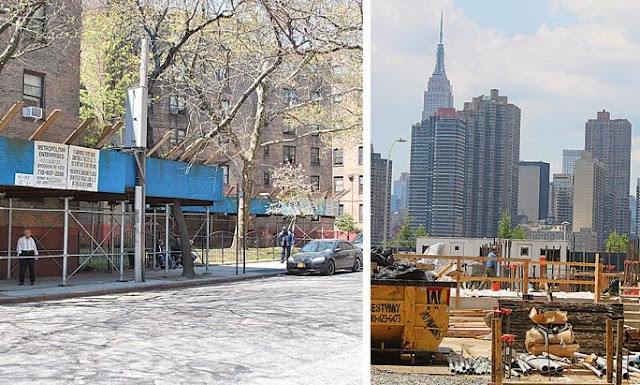 With the mayor’s new housing plan released, many neighborhoods throughout the city can expect major changes.

As one of the more socioeconomically diverse neighborhoods in the city, Long Island City is in a particularly interesting position.

“I think we’re all thinking about the challenges,” Councilman Jimmy Van Bramer (D-Sunnyside) said. “We have the new development of Hunters Point South, which has 5,000 new units which are not even fully up yet.”

Hunters Point South, which was referenced in the mayor’s housing plan as a case study, has been booming with development — both commercial and residential. But the biggest influx of people will not come until all three apartment buildings are fully up and running.

“I think what’s important with the planning process is that infrastructure precede development and that we prepare for the needs of communities that do not exist yet,” Van Bramer said.

The councilman has said on numerous occasion that transportation is a major problem facing the people of Hunters Point, which will only worsen as more apartment buildings are open.

Van Bramer has pitched increasing No. 7 train service — which is currently lacking due to weekend construction — and ferry service as well as developing an express bus dedicated to Hunters Point South. He also has pressed the city to bring its bike share program.

But Long Island City will not just have to deal with the issues that come with rapid population increase in the upper-class areas; public housing will be changing as well.

Under Mayor de Blasio’s plan, families living in homeless shelters will be moved to the top of waiting lists for public housing apartments.

This may pose a particular problem for Long Island City, which holds the Queensbridge Houses, the largest public housing complex in the nation.
Posted by Queens Crapper at 12:01 AM

NYC does not need 9 million people. We are already overcrowded and overburdened.

The whole world doesn't have to live in NY. There are other states and other counties.
No cares about protecting quality of life anymore.

The Manhattan developers love this. It plays into their grubby, greedy hands.

LIC gets affordable housing (read: welfare and shelter people) and Manhattan gets the crème de la crème of the apartment seekers.

Yeah, I'm gonna buy a condo or co-op where my next door neighbor is Malik Mugme.

"The majority of the affordable units in the second phase will be reserved for middle-income families making between 105 percent to 155 percent of the area median income, or $111,670 to $141,735 for a family of four."--http://observer.com/2013/12/tf-cornerstone-tapped-for-second-phase-of-hunters-point-south-development/

Welcome to Queens, you just spent over $1 million on your luxury condo. You voted for de Blasio and now meet your new neighbors, all of them former residents of a homeless shelter and they are living rent free next door.

So with this plan if LIC gets this, does Jamaica get the opposite, luxury condos filled with upscale people?

ANON is right, this city is and has been overcrowded without proper infrastructure and corrupt agencies like DOB, all which does not help the quality of life in NYC.

There are many other states to move to that are far cheaper than NYC and have opportunities, so I don't quite get why poor immigrants come here to pretty much have a slightly better quality of life than what they had elsewhere (but not that much better), when they could have a much better quality of life in another state that has a more affordable cost of living and where one does not need to cram 17 people into a two bedroom apartment run by some slumlord.

Joe, I have thought about that question for a long time and I have two answers:

2. In areas other than the New York metro area, the conditions attached to receiving public assistance are stricter than New York's - such as documentation, verification, required appearances, demonstration that you attempted to seek employment, etc. New York is easy and that overcomes the relatively higher cost of living.

"The majority of the affordable units in the second phase will be reserved for middle-income families..."

And it only takes one from the lower income ($32,000 per annum) reserved apartments with resentment and jealousy to turn a development into a horror show.

Gee, I thought the QC crowd only resented the takers--now somebody who works for a living is going to be so "resentful and jealous" (despite living in a luxury building his take-home would otherwise not allow him to) as to destroy the entire living experience for everyone. Neat trick. And you say this will happen in everyone of those towers? My, my.

How do you know who is part of the QC crowd and who isn't? Because they commented here? I guess you're one of us!

@Crapper: I refuse to join any club that would have me as a member.