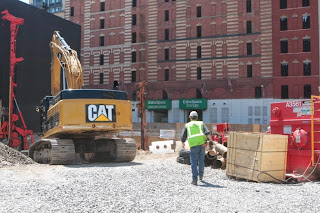 The City plans to attack economic segregation in its affordable housing plan — placing the poor in middle-class neighborhoods and the more affluent in high-poverty spots.

“We really have to make economic diversity a cornerstone of that plan,” she said at a City Council budget hearing Wednesday.

“That means that in some neighborhoods that have mostly middle or upper-income housing, that we would need to put affordable housing at the very lowest income,” she said.

“But in some communities where we have a great deal of poverty . . . we would try to bring more moderate (-income housing) into those neighborhoods, to try to achieve the kind of diversity that we want,” Been said.
Posted by Queens Crapper at 12:37 AM

Advice to all middle class homeowners in the outer boroughs: SELL! SELL! SELL!

So will they be busing in people from Jamaica to the school going on the land that the Keil Bros. sold out? I wonder what that will do to the already crowded H Mart there.

What exactly qualifies as middle-income housing these days? Little shitboxes in Flooshing go for over 600K.

The middle income people are now living in basement apartments along with the lower and lowest income population.

We have no middle-income housing in NYC anymore. Perhaps in Corona or other run-down areas? Wait - Jamaica! I can't believe people haven't already gentrified that area. There's nothing up North left. Eastern and Western Queens are already too expensive and then you have a few ghetto neighborhoods in the middle beginning with downtown Flooshing and heading West.

You know what is going to happen. The luxury housing will be built and that is the end of the story.

The only way to stop this segregation is to stop allowing businesses to post signs in other languages. The city needs to promote speaking English. People move to certain neighborhoods mostly because the stores cater to them. Promote speaking English in this city and Maybe you will get more mixed neighborhoods. Tell these foreigners to stop catering to their own kind. English=unity!

Loft apartments by the South Jamaica Houses! Beef patties for all!

Flushing could use some diversity.
White people and Blacks are very rare and now are the minority. We all need to be more sensitive to their needs. (tongue in cheek)

That's just what happened to the Classon Point-Soundview section of the Bronx back in the 1950s.

The result was that it tuned into a high crime ghetto within 5 years. Most everyone then moved to Queens.

It hasn't recovered much.

The name Soundview remains a curse unto this day.

They even had to change the name of the old Soundview station to Soundview-Morrison Ave to help take the edge off of the area.

Stop with this diversity crap already!!! Diversity is the new segregation and it's killing our neighborhoods and city.

I am all for it if they export Queens people to places like Tribeca or Chelsea.

Think of the possibilities:

Sunnyside meets the West Side.

Wow, the possibilities are endless.

De Blasio’s affordable housing plan on paper might sound good (and it really even does not sound good there) but in reality it sounds like some extremely far left liberal idea that will end up creating more problems than it solves. And I am a liberal.

First off his plan of 200,000 units over a ten year period sounds pretty much like nothing, we are talking 20,000 units a year in a city that has a ballooning population of easily 9 million people and climbing, where most people (not counting the poor) can barely afford to live in this city. Why even bother with such a plan that does not even put a dent in a very big problem.

Now we are hearing his way of dealing with economic segregation is by dumping poor people in middle class areas and the more affluent (read RICH) into high-poverty spots. First off, what anymore in NYC is even considered middle class and why isn’t the poor people being dumped in affluent communities like where our Mayor is living. You could have some low-class apartment building dumped right on your block after tearing down some nice brownstones. I mean this is pretty much what goes on now in Queens and Jamaica, tear down nice 1 family houses and stick up 3-4 story cheap third world looking buildings, fill them with low-class slob people (usually about 20-30 families) and then have a slumlord who does not give a shit and lets the place become a major problematic eyesore. Yeah, that has worked out real well in Queens, which anymore is pretty much becoming a third world shit hole except for a few places.

And exactly how do you get the affluent people to move into, oh, let’s say the big shit hole South Jamaica. Just what affluent folks want to be living next to a shitty apartment filled with shitty people who toss garbage all over and blast loud ghetto music at all hours of the night. Oh and let’s not forget a few shootings every week. There is a reason most civilized people do not want to live in the “savage communities” nor do they want the “savages” coming to their neck of the woods. Everything these folks touch turns to shit.

This bullshit plan of dum Blasio is somewhat in effect in Jamaica. The luxury rental apartment building Moda was placed right into downtown Jamaica area . A really good thing, but not if you are not going to bother cleaning up the surrounding area, enforcing sanitation laws, providing better quality stores and making people feel safe. Some of the complaints from residents living at Moda, are the amount of homeless people/questionable folks hanging out around the Moda building, the lack of quality stores, the garbage situation surrounding the area and the homeless shelters that are just a couple of blocks away that have become problematic (El Camino is one of them). At let’s not even begin to start about the high rental rate to live in such surroundings, studio apartments in the Moda start at $1400, pretty damn high considering what you are surrounded by and the lack of decent amenities in the neighborhood.

Time to go back to the drawing board on this disaster waiting to happen. How about just doing some responsible gentrifying of the Jamaica area. Why a community that is close to two airports, public transportation that includes the LIRR (15-20 minutes to Mid-town), E, F & J train and numerous highways nearby has not been gentrified is beyond belief. Can you say POOR LEADERSHIP.

it's design to confuse,aggravate the working class as it is to enrich and enlighten the upper class.

I can only imagine some yuppie or hipster who cannot maintain his/her exotic food microbrew lifestyle and pay rent to live in williamsburgh or LIC and winds up poaching an affordable apt. in a new development in greenpoint or astoria.So they wind up winning anyway and still enjoy their 10 minute commute and keep their luxurious foodie habits.

Anon No. 9: The name of the station used to be Sound View Avenue. But Sound View Avenue hasn't intersected the Pelham Line since the Bronx River Parkway was extended southward many years ago (thank you, Mr. Moses!). If you got off of the train looking for Sound View Avenue, you wouldn't find it. So the name was changed to what it is now - nothing to do with the neighborhood's reputation.

Billy the boy mayor keeps coming up with goofy ideas at a rate of about one a day. This one is hilarious. What rich people are gonna move to Brownsville and where in the rich neighborhoods is the mayor going to find space for affordable housing. The real estate is too expensive there.

200,000 new housing units? Yeah, right! I wonder how the fireplace ban is coming along? How about the plastic bag charge? No go on a speed limit of 20 mph. I still see horsies trotting around the city too.

This dummy mayor will not last a full term.

De Blasio’s executive budget boosted the housing department’s capital cash to $3.1 billion, up from $1.9 billion in his January preliminary budget, to help pay for the ambitious proposal

TIME TO GET THIS GUY OUT OF OFFICE!!!!! 3.9 BILLION of OUR money on something NO ONE wants!