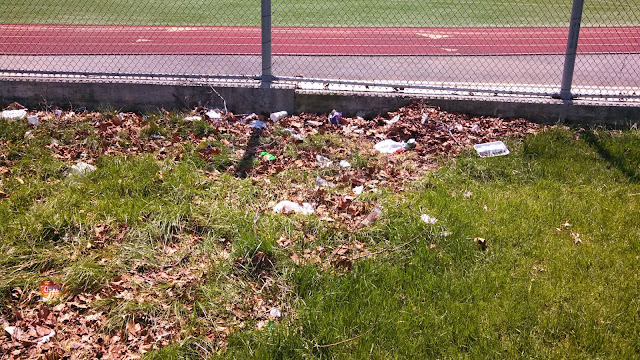 A few years ago, the baseball fields just north of the Flushing High School Track and Field (around 26th Avenue and 149th Street) were renovated for the first time in a half century at a significant cost. The fields were actually closed off and locked for several months, even after they were completed. About two months ago, the gates opened. The place has remained pretty empty, which is pretty nice. 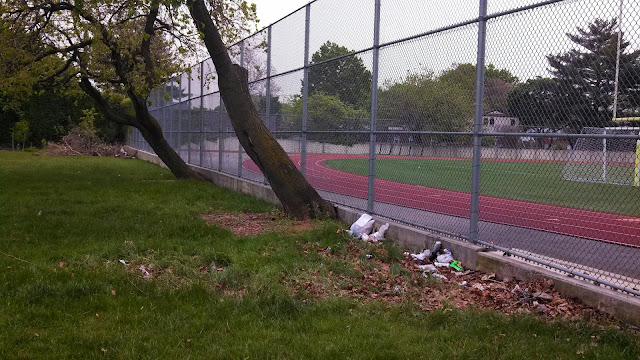 What's not nice is the increasing trash piles along the fence - as per the Bloomberg administration's "solution" to household trash being dumped in park trash cans, there aren't any! The "bioswale" that was built along the east side of the field is pretty well designed, but part of it is now becoming a dumping ground for garbage...it also looks like the Parks Department is dumping branches and tree limbs on a newly planted area, which doesn't seem very bright. 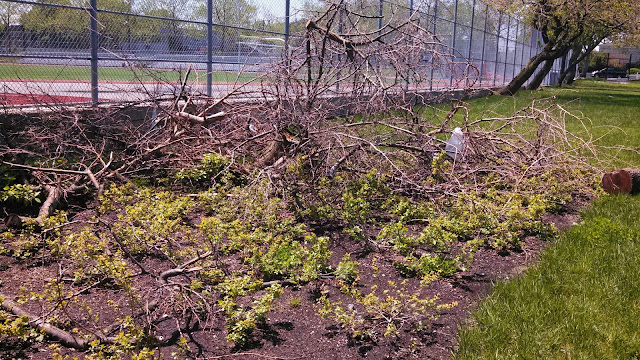 Two days ago, I approached a Park worker cleaning up the south end of the Park at Bayside Avenue. I mentioned that there was an increasing amount of trash in the fields up by 26th Avenue and that people were about to contact the elected officials, 311 and the media. He sighed and thanked me for letting him know...and two days later, the trash is still there.

Crappy, please work your magic to get the Parks Department to do their jobs?

Service Request #: C1-1-972695462
Date Submitted: 05/24/14 2:47:40 PM
Request Type: Maintenance or Facility
Details: Garbage or Litter
Thank you for contacting New York City 311. Your Service Request has been sent to the Department of Parks and Recreation for action.
Posted by Queens Crapper at 12:49 AM

This is nothing have a look at Forest park. Most of it is starting to look like Jamaica. Crowley, Katz and Parks dept should be shamed of themselves!!
WE ARE IN JUNE ALREADY YOU USELESS ELECTED S !!!

I was just in Forest Park on Memorial Day and it certainly seemed cleaned to me and I was biking all through it. Not even close to Jamaica. I did not see any kind of trash, but when I came back to Jamaica, small Rufus King Park was already a mess caused by the natives there.

But the electeds are certainly useless and not just the crooked lazy ones of Jamaica. And Katz, what a big waste.

Crappy im an avid follower but very disappointed today, this is what is posted on memorial day? Lets focus on the real important stories on memorial day like the vets not some litter in the parks....

Why do you think that it's not important on Memorial Day to highlight that the City allows a park named "Memorial Fields" in honor of our fallen soldiers to look like crap? Did you miss the piece I posted about the girl scouts placing flags on the graves at Cypress Hills Cemetery?

Are those trees growing sideways?

The grass ball fields directly north of this Flushing HS field were rehabbed and made into a soccer field.

Locals still use it as an early morning dog run and let their pets crap all over without picking it up. Disgusting and illegal.

Also, when kids try to use the astro-turf fields they are chased by the "parkie". Funny stuff, the city carpets the fields then doesn't allow the locals to use them. The exception is the HS fields at Lattimer and 32nd Ave. Some groups use the fields on Sunday's with Park Dept. Security guards keeping those without permission out.

Speaking of putting flags on graves, there is a spot in Calvary Cemetery that is a cemetery within the cemetery and owned by the NYC Department of Parks.

This mini cemetery holds the remains of Catholic Civil War vets who passed n New York hospitals and it is in sorry shape due to vandalism and the porous security in Calvary.

NYC politicians and veteran groups should make an attempt to restore this site to it's former magnificence.

Here is the site.

How can we demand this park be tended after! It is a beautiful park and has much more potential.