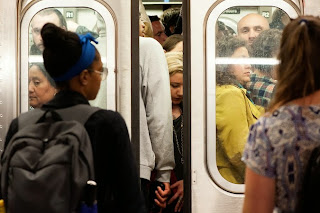 The math problem of the New York City subway system is no secret, its remainders spilling onto the platforms where luckless travelers watch full trains come and go.

In the last 20 years, daily ridership has increased by some two million, to roughly 5.5 million, with little change in the system’s capacity.

Amid this surge, perhaps no train has been tested like the L line, facing down the dual strains of rapidly growing Brooklyn neighborhoods and a transit map devoid of many viable options nearby.

The authority said this week that it would add 33 round trips on the L on Saturdays and 22 on Sundays beginning this fall, helping to relieve persistent overcrowding and shaving about a minute off the average wait time. Three weekday evening trips will also be added.

Transit officials had already planned to add eight weekday and eight weekend round trips next month. In 2012, the authority added 16 trips on each weekday for the L, 11 on Saturdays and seven on Sundays.

Yet as the neighborhoods have grown, gentrifying one eastbound stop at a time, even these service changes have struggled to keep pace. On Thursday morning, at the Morgan Avenue station, Marisol Santiago and her home attendant, Germania Dmeza, could not board a train around 8:30 a.m. and just watched the young faces roll by.

When a second train came, Ms. Santiago muscled in, but could not carve enough space for them both. The doors closed.

“This is normal at this hour,” said Ms. Dmeza, her charge shuttling toward Manhattan alone.

According to agency data, ridership on the L increased at every station last year. At Bedford Avenue, weekday ridership has grown by more than 50 percent since 2007. Much of the increase has come during off-peak hours.
Posted by Queens Crapper at 12:43 AM

Peak capacity on the L is up 50%+ due to upgrades, it can be increased another 50% without too much work (by subway construction standards at least, figure less than a billion dollars, even with NYC inflated construction costs). No reason to do that until they're running as many trains as the line can handle, which they aren't at peak, never mind off peak, which this article is about.

The real issue is that you can't afford to operate subways at reasonable frequencies when you need to pay two transit workers a good salary + benefits + pension to work on each train. Other world cities use one or zero employees. The MTA tried one person operation with the L but the union blocked it. Toss the union scum and the capacity problem off peak is history.

So explain to my why these dumb mayors allow this overdevelopment to continue? Do we really need to see 9 million people? My answer would be no. Maybe some would disagree, however, I don't see how having 9 million people in this city would help any. The roads already look like crap, there is way too much traffic in this city as it is. Now you can't even fit on the trains. It's not only trains that have no more room. Our buses, schools, courts and jails are also overburdened. We simply have no room for 9 million people!

So the trains are totally overcrowded but the revenue doesn't cover the costs?

And de Sleazio wants to let even more people in?

I guess he sucks at finance!

I predict a major subway accident in the near future. NYC is so broke-down - the greatest city in the world - what a joke!

That didn't take a knowledge of rocket science!

Antiquated transit systems--overcrowded hospitals and schools--and a great strain on emergency services--think before you over build!

Not the mayor or the MTA fault, but the fault of your city council selling themselves to the developers who make them zombies that suck the life out of communities so the developers can live like kings off your taxes.

I have friends that live on the Lex and they tell me that 4 or 5 trains come into the stations before they can jam on one. The 2nd Ave will make things better for only a few years as 5 story buildings are torn down for 40 story buildings.

In Queens the general rule of thumb that a crisis in Manhattan is a disaster across the river.

Next time No Brainer bellyaches about the 7 train, ask him why he is in favor of development?

Ask him again, better yet, hound him about it.

This is a serious issue that sooner or later will endanger the public big time.

Imagine a fire or the like with a 10 car train with thousands jammed in with no opportunity to escape the smoke and fumes.

I'm tired of commenting about all these self-satisfied consumer Ifools,generation gentrification,the worst transit system in the world,and our appointed incompetent servants who refuse to serve us and just post 2 songs that immediately came to mind

Of course we need a 9 million population and for NYC to be unaffordable for retirees, so they move. The existing budget and union pension structure requires ever increasing tax revenue due to an increasing working population to balance the budget. They just keep transferring costs from today to the future

The whole point of subways is allow higher density in the city. If the subway infrastructure doesn't support the development, then the subway has to be upgraded. This is a net good for the city. An overdeveloped L and M line is a better prospect than the abandoned buildings that exist along significant sections of those lines now.

Anonymous said...
The whole point of subways is allow higher density in the city.

THE POINT OF A SUBWAY IS TO TRANSPORT PEOPLE.

If the subway infrastructure doesn't support the development, then the subway has to be upgraded.

IF INFRASTRUCTURE DOES NOT SUPPORT DEVELOPMENT YOU DO NOT DEVELOP OR CHARGE THE DEVELOPER A FEE - NOT GIVE THEM THE PROFIT AND STICK THE COSTS TO THE TAXPAYER.

This is a net good for the city. An overdeveloped L and M line is a better prospect than the abandoned buildings that exist along significant sections of those lines.

FILLING THE ABANDONED BUILDINGS IS ONE THING, TEARING THEM DOWN FOR SOMETHING 3 OR 4 TIMES THEIR SIZE IS STUPID - UNLESS YOU ARE A DEVLOPER AND THE POLITICIAN THEY BOUGHT THAT HIRES PEOPLE TO WRITE THIS SHIT.