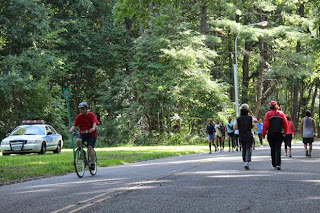 An increase in car break-ins in Forest Park has prompted police to warn residents not to leave their valuables in their cars.

Thieves are cracking windows to steal wallets, purses and other valuables, police said.

Law enforcement officials said they have noticed an uptick in car break-ins in the area in the past three weeks, during which thieves stole valuables from approximately half dozen cars, after the drivers parked their vehicles around Myrtle Avenue and Freedom Drive.

Thieves break into vehicles by smashing cars' windows and usually target vehicles on Sundays, between 9:30 a.m. and 11 a.m., authorities said.
Posted by Queens Crapper at 12:14 AM

I thought the new installed police cameras would have helped some.

Cameras have not been installed yet. According to Assemblyman Miller, the NYPD sat on the paperwork for a month, delaying their acquisition. One is slated to be installed right in this spot.
In the meantime, they say these crimes are happening on Sundays between 9:30 and 11 AM. Call me crazy, but that seems like a "pattern." Should be real easy to catch the guys - park a few cops in an unmarked car nearby on Sundays between 9:30 and 11 AM. I think they call that a stakeout. It works on TV.

This is a goddamn disgrace,in plain sight in the light of day.The NYPD is,no are a laughing stock right now.Is there even a contract to install these cameras,or they are waiting to see if bratton has any friends in the surveillance complex.

cameras are unnecessary,they don't deter crime,but they're well enough when the footage goes viral,ask jay z and his banshee wife and sister in law

ed nails it,when the brat bails in 5 months,this guy should be commissioner.I am sure action would have been taken if dudes were selling weed there.but auto burglary and raping,can't do nothing for you man.those crimes are hard to catch.

2 cars had their airbags stolen on my block in the middle of the night on 72nd and Metropolitan. Another car left unlocked in the driveway was gone thru but burglars only left with pocket-change. Can we get cameras around the neighborhood?