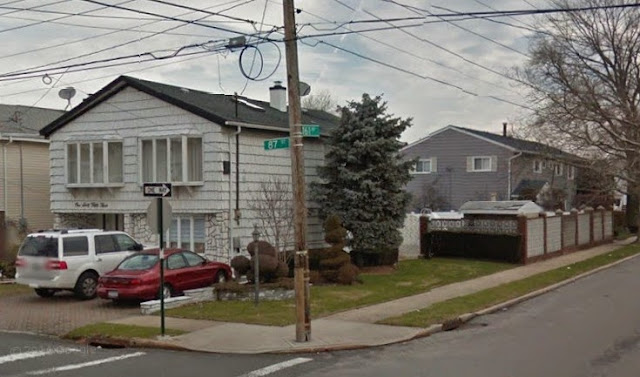 I've been reading your stories on illegal paving with some interest. Here in Howard Beach there is so much hand-wringing over what to do to prevent flooding, and there are several groups that have been assigned the task (along with huge amounts of taxpayer money) of figuring out the best ways to make sure we don't flood again. However, illegal paving continually goes unaddressed. Since Hurricane Sandy, at least three houses on my block have been paved over, and the sewer backs up at every storm. The latest is a house on 87th St (160-53) -- a corner house -- which has ripped up every last blade of grass and paved over it. Calls were made to 311 and Community Board 10 before the concrete was poured, to no avail. Now the concrete has been poured and pavers installed. We are still making calls, but wonder what the penalty could possibly be -- it seems unlikely that anyone would be told to rip up the work that they have done (and I'm sure it's six figures, at least). Meanwhile, the sewer back up is getting closer and closer to my house. We are going to move. I had hoped to wait another year at least but am getting more and more concerned that flooding will happen before then.
As an aside, I read through some of the comments on your articles, and let me assure you that the people paving over their yards here in the HB are almost all born and raised right here in Queens!
Anyway, thanks for your articles!
- A Fan
Posted by Queens Crapper at 12:12 AM

There is a law recently put on the books that require newly built homes (since 2007) have 50% of the front of the house uncovered by pavement. Lawns or bare soil with trees are recommended. Not sure how this applies to older homes. But may be worth looking into.

Maybe some bioswales in place of the green concrete.

Go after your electeds and make it public everytime.

they are so brittle when it comes to their reputation. if others see you do it they will get into the habit, too.

not only is that too much pavement, that is also illegal curb cuts.

This new law that went into effect a few years ago is not enforced at all. The problem with this and other issues, is no enforcement of any kind. The laws are all on the book, including illegal curb cuts, but are not enforced and DOB will do absolutely nothing. They do not do anything when it is happening and they certainly will not do anything after the fact.

This is an issue In Jamaica as well as all over Queens and DOB told me that "it is not at the top of their priority list". They will more than likely do nothing and good luck with elected leaders stepping in, more than likely will not happen.

I reported 30 such cases within blocks of me 6 months ago and DOB has not even looked at it. Ironic since in 2005 when all of this was actually happening and neighbors reported it to DOB back then, they found no violations for each and every one, even though each one was illegal.

For new readers - this thing with pave-overs is a cultural thing and gradually the block will be lawn-less and tree-less - and an uninterrupted curb cut. To some people that's a beautiful thing.

You, the long-term Queens resident, have to move to a place where you can have neighbors who don't see a lawn-less and tree-less street as a beautiful thing.

ANON stated: "You, the long-term Queens resident, have to move to a place where you can have neighbors who don't see a lawn-less and tree-less street as a beautiful thing."

Sorry but this is defeatist bullshit thinking. It seems that people always have to head to the hills because this damn city does not enforce the laws.

Yes, make it public, as this blog's been doing for years. I think this is the most recent article reposted here:

There are many others.

Will they ever listen?

AGREED a HUNDRED PERCENT JOE MORETTI. LET;S SPEAK OUT AND CHANGE OUR NEIGHBORHOODS FOR THE BETTER INSTEAD OF THE USUAL RUNNING AFAR.

ANON stated: "You, the long-term Queens resident, have to move to a place where you can have neighbors who don't see a lawn-less and tree-less street as a beautiful thing."

Sorry but this is defeatist bullshit thinking. It seems that people always have to head to the hills because this damn city does not enforce the laws.

Concrete & overpaving abound all over this neighborhood. No politician there would dare to say anything against it.