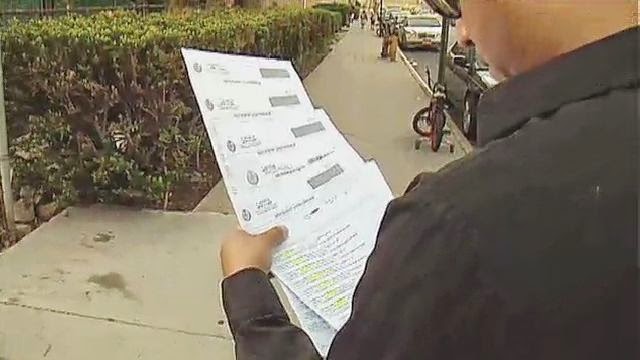 One Corona intersection has four crosswalks that lead to nowhere, yet drivers are still ticketed for parking in front of them.

The $115 tickets are issued for blocking a pedestrian crosswalk. Rodriguez says he has repeatedly fought and got them dismissed.

"I've won 39 tickets but to tell you the truth I'm tired," says Rodriguez.

Rodriguez says he's tired of taking off work, driving to court, paying for parking and generally wasting his time. NY1 found that according to New York City Traffic rules, parking is allowed at some "T" intersections—those without traffic signals, all-way stop signs or crosswalk markings—even if there is a curb cut at that location. The exact description of this particular intersection.

After getting 39 tickets dismissed, Rodriguez says he believes the 'T' in 'T' intersection stands for Ticket Trap.

This has been going on for a long time.
Posted by Queens Crapper at 12:27 AM

Take it to you councilman. Blame him for city services that suck.

They are godlike. They can do anything.

Even participate in running government - if its in their best interest.

While the guy is right 39 times? He's basically parking there knowing he's going to get a ticket. The spot is open for a reason, it's like he's doing it just so he could get the attention. and he has to take off work each time to fight it? it's like he's trying to get fired so he could sue the city for losing his job.

We have the same issue in Woodhaven. My husband sometimes gets home at 1 or 2 in the morning from work. Parking spots are at a premium and he parks there as a last resort. His 3 tickets have been dismissed as well. He is now making a copy of the last dismissal and keeping it his glove box. He will put it on his dashboard in the future.

Legal or not, I'd stop parking there.

It's because he's white and the meter maid is an angry black man from the Caribbean or Pakistan.

The problem is the officer or traffic agent is not present at the hearing for the ticket so he or she never finds out that a mistake is being made and keeps making the same mistake.

omg--no one got a can of black oil base and painted over it ?
nyc truly is neutered.