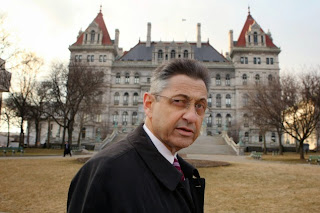 As John Liu prepares to launch his campaign against State Senator Tony Avella, he can count on the support of one of the most powerful men in Albany.

Mr. Silver said he thought Mr. Liu, who is set to kick off his bid tomorrow, would be an asset in the state legislature.

“John Liu is a friend of mine for many years. He’s a great public servant and New York State would be greatly benefited by his election,” Mr. Silver told the Observer. “We have the best in John Liu. That’s what I’m about. I want the best man.”

I'd be worried too, if I was John. Silver is one of the most hated Democrats in the state.
Posted by Queens Crapper at 12:13 AM

establishment dems are running scared.Silver Shady thinks he's in office to serve the party and not the people.

I know Avella is more about action than words,substance than image,but unforunately he's got to get a campaign going.lazy voters only go for those who are familiar.

Wasn't Liu disgraced? How can he run?

Liu was caught illegal fundraising and taking tax payers money, so he technically threw his staff under the bus, it was still HIS campaign.

The signs are there, as they were with Halloran. Don't make the same mistake again people.

How can Sheldon Silver say these comments and not expect to be laughed at.
Whatever happened to backing honest candidates with clean records, John Liu is the best he can do???
Desperado.

SILVER IS A THUG !

A perfect example of Birds of a Feather flock together.

Liu running with the support of the Queens elite is yet another reason that the leadership of Queens has made this borough a laughing stock around the city.

They are here only to exploit you and your community for personal benefit.

Liu, with his family connections and the type of unsavory political operatives he pulls around him, lives under a permanent stench.

The fact that Honest Joe Crowley has dismissed these facts tells us what Crowley thinks of the serfs in his petty little kingdom.

The fact that the local press and pols are going along with this farce speaks volumes about their intelligence, their values, and their attitude towards their subjects - and what respect your bowing and scraping before them gets you.

A political elite like that goes a long way to explain how that library board thrives in a septic place like this borough.

The point is that Tony is for building and creating strong communities, the others are for weakening communities to make them fat prey for developers - and their donations.

Even people from Queens can understand it.

Maybe Liu's laundered Taiwanese money pipeline is still open to Silver. Where do you think the Dem clubhouse has gotten their cash from all these years starting with Manes?

Tommy Huang, Liu's cousin, was the fist distributor. Look up that junket that a bunch of local pols took to Taipei back ni the day. A few CB 7 biggies went too.

What for, to eat dumplings?

Grill Apelian for some history regarding this.

I hope Tony doesn't pull out of this one like he did in his run for borough president.

If I were you, I wouldn't count Liu out of winning.

He's got mucho money and the pulling power of the Dem Party soldiers on primary day.

NEVER UNDERESTIMATE YOUR ENEMY OR OPPONENT!

One mollusc endorsing another

Have you seen Liu lately?
He needs a visit to Hair Club For Men.
It seems that Johnny is losing his hair faster than he's losing his mind.

And if he puts on any more weight he'll resemble one of those Chinese celestial gods.

His boyish look is over. Hello Buddha belly.

Liu is desperate to get out of town and hide up in Albany. But Albany might not prove to be an adequate quiet hole in the wall that this gangster is seeking.

Albany is too full of scandal already...and under the watchful eye of the feds. Liu will draw more fire.

Shelly likes Johnny because he's as dirty as he is.

Silver's endorsement amounts to sleaze ball courtesy...the kind of support that one crook gives to another..

As long as he has his 'people' who will vote for him based on his last name alone, he will never walk away.

Avella better get a great campaign team, cause otherwise he's fucked. He's burned every bridge he's ever crossed, ever. He's on his own now.

In my opinion, avellas days a almost done.

OMG if anyone thinks the Sheldon is a decent person they've lost their minds.

Of course he does. Birds of a feather.

Listen up!
The folks that elected Liu...in spite of his dad being a convicted criminal...are still as dumb as they used to be. They just might elect him again.

Tony better not take ANYTHING for granted...nor should his chief of staff, endorsers, or campaign workers.

Avella AIN'T such as shoe-in as I hear his devotees proclaiming.

Maybe THEY swallowed his Kool Aid brand, but the voting public is extremely fickle and forgetful.

Both candidates have as many enemies as they do friends.

Avella better get a great campaign team
--------------------------
You have no knowledge of all the great bills Avella has passed, zoning changes he put forth and new laws (that actually work) to protect our communities.

Liu will be hard to beat. He has the backing of almost all the political hacks/union stooges who run this borough (into the ground).

If Liu beats Avella in the primary, could Avella switch parties and run against Liu in the general as an Independent? Might not be a bad idea for a back up plan.

You have no knowledge of all the great bills Avella has passed, zoning changes he put forth and new laws (that actually work) to protect our communities.

Great and I guarantee you 85% of the people who will vote in this election couldn't name a single bill avella has introduced, yet alone passed.

If Avella doesn't campaign his ass off and raise a ton of money, he's in trouble.

Firstly Avella's staffl have both been shopping their resumes for months and he has no campaign staff.

Secondly, Avella wont win a general election with the Republican and Independent lines (the district is not like the old Padavan district, this one is 75% Democratic.)

Thirdly, how pathetic is it that the Avella supporters strategy is already to run in the general election.

One day after Liu announces, Avella gives up. Looks like he is gonna have a hard time without the Parkside Group propping him up.

Maybe he learns a lesson after this.

When did Avella give up?

When did Avella's supporters give up on the primary? Some anonymous commenter mentioned a backup plan.

Yes, the people of northeastern Queens are going to line up to vote for a guy who is a relative of Tommy Huang, who banged 3 different women that worked for him and took campaign money illegally. This is how stupid the Democratic Machine thinks their voters in Bayside are.

Tommy Huang is a pariah...so what do you think that north eastern voters will think of his cousin John Liu?

Almost everyone in the district is fearful of an inv-Asian of their quality of life.

Liu is going through the motions as requested by his Democratic machine handlers. He'll be rewarded with a cushy appointment after he loses.

It doesn't matter if you can't remember which bills Avella got passed. He's for his constituents. Liu is a self serving megalomaniac.

Plus, Liu is the son of a crook who was surrounded by crooked campaign staffers. He narrowly escaped incarceration himself.

I'm definitely NOT a racist but this race is "White" versus "Yellow". That's PURELY a sociological analysis of the district.

Liu is a criminal and a communist. He is campaigning not on what his merits are , but that voters need a democrat . He has no chance if you look at him as the unethical person and failed politician that he is . As another poster said he is hoping for his people to vote him in.......