Mrs. Lancman to become a judge 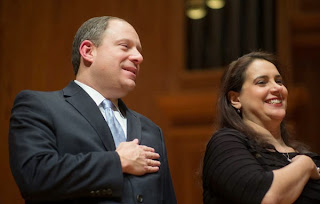 Queens Councilman Rory Lancman’s wife was nominated Monday by the Queens Democratic Party for a Queens Civil Court judgeship, a development Mr. Lancman acknowledged was aided by his renewed good standing with the county political machine.

The Democratic nomination for the position all but guarantees Mr. Lancman’s wife, Morgan, will win election for a much-desired judgeship in November.

Mr. Lancman said that his wife was found to be qualified by an independent judicial screening panel several years ago. He acknowledged that his renewed good standing with leadership of the Queens Democratic Party—whose day-to-day leadership is made up of a group of politically-connected attorneys—also did not hurt. The judgeship comes with a $159,900 salary and a 10-year term.

Queens surrogate and Supreme Court judges have been subject of criticism in the past because they frequently hand out court lucrative appointments to attorneys with close connections to the Queens Democratic Party. For instance, Queens Democratic leader and Rep. Joseph Crowley's campaign treasurer is a frequent choice. Queens Assemblyman Michael Simanowitz has also been getting a number of "referee" appointments from a judge closely connected to him.
Posted by Queens Crapper at 12:20 AM

And of course the judges give estate contracts to the well connected like the Vallones.

The library is only the tip of the iceberg. The entire smug self-appointed elite in the borough needs to be shown the door.

The problem is finding replacements.

Those that can have left, those left (for the most part with a few notable exceptions) can't.

So Virginny Joe pays off Lancman for being a good little democrat politician by giving Mrs. Lancman a judgeship and $1.6 mil in salary plus retirement benefits over the next ten years.

Rory, Melinda and John Liu are proof that you can run against County, lose and then make nice with County afterwards. If anything, it shows how weak County is that it needs to welcome Rory back into the fold.

Lancman, another no good corrupt council member who also supports the carriage horse abuse. They will need to get rid of the queens machine.

There's also whispers that Rory's young chief of staff wants to be a district leader. Takes care of his own, I suppose.

"Oink oink oink" says the piggy's wife as she latches herself firmly onto the public teat.

Keep voting for Democrats and this is all you will get.

May these 2 and all their friends and acquaintances wind up rotting somewhere in an abandoned lot being feasted upon by raccoons.

These individuals are all “family” and do not see opponents as dissenters but as enemies, and if they can’t refute you, they will screw with you, call you a racist, take away your rights, property, destroy you.
Every American should ask themselves one question: ‘What will I do to preserve the US Constitution and my rights ?’” Now ask how many real Americans with any intellect, money and enthusiasm left to stop all this nepotism and socialism live in Queens in 2014
A: Not many. The majority has been run out of town, outnumbered, in the cemetery or dyeing off.
Why do you think they grabbed all the guns ?

Something smells here. Rory Lancman's portrayal of himself as an advocate for Queens is belied by the fact that he ran for a Supreme Court judgeship in the 9th Judicial District in New York in 2012 on the Working Families line. The 9th Judicial District consists of Westchester, Dutchess, Orange, Rockland, and Putnam Counties. Where is Queens in this group? His wife gets a nomination by the Queens Democratic organization for a judgeship in Queens. Is it just a coincidence that relatives of judges and Democratic officials and leaders in Queens get approved for judgeships? Is nobody else qualified for these positions? Judges, law secretaries, and other judicial employees make big salaries. The Democratic Party leadership in Queens is just taking our tax dollars to pay off its cronies and friends. Morgan Lancman can now join Margaret Crowley, Law Secretary to Justice Darrell Gavrin and sister of Councilwoman Elizabeth Crowley and cousin of Queens Democratic Chair, Joseph Crowley, Judge Ernest Hart, brother of Justice Duane Hart, Justice Denis Butler, son of the late Assemblyman, Denis Butler, Donna Golia, daughter of Justice Joseph Golia, and niece of Justice James Golia, Anna Culley, daughter of the late Assemblyman, Anthony Seminerio, Debra Koneko, secretary to Justice Duane Hart, related to Democratic District Leader Marie Konecko, and Judges Mary and Peter O'Donoghue, children of former Justice O'Donoghue. The list goes on and on. The joke is that Anna Culley, a NYC Civil Court Judge in Queens, doesn't even live in Queens. She lives in Rockville Centre, in Nassau County. The New York State Constitution requires that a NYC Civil Court Judge reside in NYC. She gives her parents' address in Ozone Park as her voting address, even though she and her husband purchased their residence in Rockville Centre in 2002, before her first election in 2003, facilitated by her father, Assemblyman Anthony Seminerio, and his close friend, State Senator Serphin Maltese. It would be hard to believe that her own father, and his close friend, both political leaders in Queens, did not know that she lived in Nasssau County. She ran again in 2013, using her parents' address in Ozone Park, where she did not reside. She was on a petition with Melinda Katz, Elizabeth Crowley, etc. It is hard to believe that these "astute" politicians did not know that she lived in Nassau County. It is hard to believe that Michael Reich and Joseph Crowley, leaders of the Queens Democratic Organization, did not know that she lived in Nassau County. Her husband was, or is employed, with a Disciplinary Committee dealing with attorneys. Did her husband know that she lives in Nassau County? I do not believe that you could claim an address for political advantage if you do not actually live there. Just because you may have occasional contacts with your parents' house does not mean that there is no aura of sham in claiming that residence as your residence. The leaders in Queens should know better. The residents of Queens have been bamboozled by their political leaders for years. These leaders obviously care only about their personal aggrandizement. Many of them are making a fortune right under our noses, with our tax dollars. Like Culley's purported residence in Queens, their purported concern for the people is a sham.

The damage done by these garbage judges is not that they reside in some other place, but rather their incompetence to actually be judges. Incompetence is masked by politically motivated agendas, like domestic violence, that take on a life of their own in their courtrooms. Facts are irrelevant as the agenda item takes control of the case.