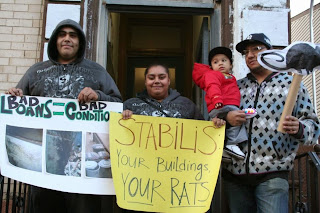 Ridgewood tenants are banding together to take their building back from a private equity firm alleged to be a predatory landlord.

They just need some financial help from City Hall.

The tenants allege that Stabilis Capital, the firm that owns the debt on their buildings, has done little to fix the buildings’ many problems.

The firm has a much-publicized track record of obtaining the mortgages to foreclosed buildings — usually rent-stabilized — and allowing the properties to fall into disrepair.

“We don’t have no locks on the doors, no bells that work, and any fixing we have to do on our own,” said Denise Serrano, the tenant leader of one of the six buildings that Stabilis has been trying to acquire through foreclosure proceedings. “Everything is cracking, and the heat and hot water, sometimes, so that gets turned off.”

The court approved a management firm to handle maintenance on the buildings. The original landlord, Steven Kates, has been fighting the foreclosure in court for more than six years.

The tenants say they need more than $1 million through incentives, loans and tax breaks that the city offers for affordable housing programs to make an offer for the building.

They fear they could eventually be pushed out of their apartments, many of which are stabilized units that rent significantly below what they would fetch at market rates.
Serrano’s three-bedroom rents for $789 a month, for example.
Posted by Queens Crapper at 12:42 AM

I hope they get help. This is the only way to keep truly affordable apts for working people.

Reasonable rents allow families to save and pay for their children's future and their own retirement.

Every basic need that get bled away by some landlord is one that WE -the taxpayer will eventually have to pay.

these people are heroes

and these predatory parasite capital firms should be abolished.They represent everything foul about capitalism and the real culprits for destroying it.Its why we have Deblasio in office,for the hope(maybe false hope)that he will be a savior for the working class.

What Stabilis is doing to these people,and other firms like it are,should be criminal and is purely evil.This is what is ruining the boros right now.All to please generation gentrification with their awful frivolous spending habits.Because if the rents rise in greenpoint,instead of banding together and fighting it,they will move to ridgewood,because they can afford not to complain.

I'm not going any further.

A job, either having one or creating one, allows one to have the earnings in order to choose where to live.

The city is making its residents dependent on the city for housing by the millions. This insane system of rent-control, rent-stabilization, rent-subsidy which New York has is about as far away from "capitalism" as one can get outside of a jail.

The tenants should get a quote on the cost of repairs and work out the cash flow for the debt service, taxes, insurance, and maintenance, and when it works out to twice what they pay now, hold up signs that read "Somebody, give me $789 a month so I can live in my three bedroom."

And yes, put the landlord in jail. He's not helping.

Believe it or not, Jack Kemp came up with that idea.

"The tenants say they need more than $1 million through incentives, loans and tax breaks ..."

The tenants want a million to fix up a piece of property that they hope to own.

Not a bad deal. Get a building with city money. Do we, the taxpayers, get the loans and incentives paid back when the building is again in the black and on it's feet?

Interesting how this is happening as the neighborhood turns with the hipsters coming, Own a building on city money, jack up rents to gentrification interlopers, windfall!

What ever happened to having a good ole' rent strike? Haven't seen one of those since the 1980s.

This post is incorrectly titled. It should say: "Rent stabilized tenants want the City to buy their building for them."

Sec 8 Brats !
Most these people been there long before gentrification came. I have them on Seneca ave as well.
Taxpayers pay there rent, healthcare, kids schooling & services and NOW THEY WANT WHOLE DAM BUILDINGS !!

BTW: These people (always walking back from the bodega with cases of beer) have hordes of kids with nothing to do but rob each other, ride tricycles & skateboards INSIDE THE HALLWAYS smash up there own buildings. They then ALWAYS blame the landlords (or anybody else who owns valuable things) for everything !!
--call me a racist when I say "Sorry not for rent"
BTW many drive BMWs and brand new SUVs multiple cars per family you can no longer find safe parking. I have to drive a crappy 82 Cavalier with no radio and sometimes park 2 blocks away its bullshit.

Joe couldnt have said it better. I have a sec 8 tenant who has never paid gets a lawyer paid for by the taxpayers and still lives like a king. No jobs smokes weed, wears jordans and calls 311 for every little thing to make your life miserable and you have to pay them to leave the apartment. NYC is full of these blood sucking low life losers...... something has to be done.

Maybe if they worked a day in their life, they could buy the building without getting it for free like everything else they are allready getting.

Joe, where do you get parts for your '82 ride? I'm ready to junk a '93 because I can't find a part for it neither from the dealer nor salvage yards nor the internet.

A friend owns an 8 family in Ridgewood and he rents to neighborhood families and their relatives. Lately he has had problems from renters

He replaced all the windows a couple of years ago and put child guards around the bottom to protect the youngsters. Several weeks later several were removed by the tenants. Why? They couldn't hang their laundry from the sill.

He replaced the front door lock six times in the past year. The tenants don't know who is doing the damage.

He replaced the heating system and set the temp at a constant 65 during the day and 60 between 11 PM and 6 AM.

The tenants complained that it was too cold. When he pointed out that they had the windows open all the time they cursed him.

They broke into the basement and tried to up the temp but broke the thermostat causing over $500 in damage.

He has had to replace trash cans every month because the tenants commandeer them for their apartments. Some even throw the cans with garbage out the back windows into the yard.

All of this is the done by three tenants who are on welfare, SNAP and have illegal alien relatives from the DR living with them. Plus all three are over six months behind on rent and no local lawyer wants to handle the eviction case.

I hope hipsters and educated population move in!

George: eBay, Hemmings, lots of junkyards in the Bronx, New Hyde Park and South Suffolk county. Many of them 80s cars use the same parts all the way up to 89 --90s American cars up to 2001, sometimes 2003.
No reason to junk a 93.
Give both July and F&S in New Hyde Park a call first.

Rent Stabilization is a farce that destroys market values across the city, inflating costs for those in non-subsidized housing.