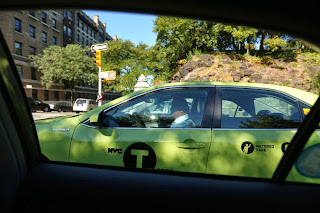 The administration of Mayor Bill de Blasio, whose campaign relied heavily on contributions from the yellow cab industry, signaled on Thursday that it would slow the growth of a rival taxi fleet intended to expand street-hail service outside Manhattan.

The new fleet, known as green cabs for their color, was introduced last year under the Bloomberg administration and has proved a popular way for New Yorkers to travel in parts of the city where yellow taxis rarely go.

But the green cabs have been vigorously opposed by the powerful yellow-taxi industry, which stands to face more competition. The industry’s leaders were among Mr. de Blasio’s biggest contributors and fund-raisers in last year’s mayoral race, infusing his campaign with more than $300,000.

The city had been authorized to issue permits for 6,000 additional green cabs beginning in June, adding to the 5,081 already on the streets.

But on Thursday, Mr. de Blasio’s newly installed taxi commissioner, Meera Joshi, said the administration would not issue them until it had pursued a longer process of “stakeholder engagement” on the plan. Ms. Joshi did not give a timeline for when the permits might be issued.

The move is somewhat incongruous with Mr. de Blasio’s trumpeted goal of expanding city services into long-neglected areas outside of Manhattan, leading some to question whether his stance on the green-cab program is motivated by the financial lift given to him by the taxi industry.

And then, just like that, the big D changed his mind.
Posted by Queens Crapper at 12:38 AM

Oh well, like the rest of the Democratic Party, playing lip service to the public yet keeping the public at arm's length as they sell them down the river to the developers.

Remember Bloomberg was made possible by the Democratic controled city council and this guy is no different - except that he is appointing incompetents.

Welcome back to the real world of interest politics.

We had twelve years of Bloombag. One of the few good things to say about him was that he financed his campaigns and thus was behooven only to his own beliefs...and did a lot of damage to the working class.

From here-on it is back to pay-to-play. Only massive public outcry can overcome money. I don't see that happening for cab drivers.