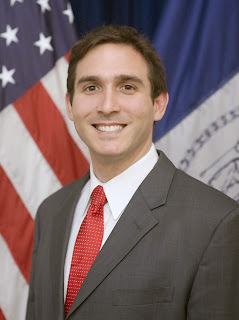 A city councilman wants to shed some light on obscure government notices.

Under legislation to be introduced by Councilman Ben Kallos (D-Manhattan), the city would be required to post all government notices on its website — from announcements of a community board meeting to an application for a new sidewalk cafe.

“We can save a lot of paper and money and increase transparency,” he said.

The notices are physically posted in public buildings or published in the back pages of newspapers.

Another bill would require all records that the law says must be kept for public inspection to be posted online.

That would cover such documents as city contracts with private vendors and applications by developers for zoning changes.

This sounds like good government, commonsense legislation. Which is why it will probably die in committee.
Posted by Queens Crapper at 12:14 AM

And just wait for the weekly newspapers to weigh in.

You never see Queens legislators doing something like this: they have a complex system of doing things that are like gang signals - only the initiated know what is going on.

This is an excellent start. Of course, most won't be bothered - if only due to the high number of notices. On the other hand, posting by, say, community board might help. As to posting docs for public review on line: TWO THUMBS WAY UP!
Next frontier: holding the meetings at a time when people other than professionals and politicians can actually attend - rather than during the day during the week.

How novel and innovative!

What a joke that this is still an issue in the 21st-fucking-century!!!

Isn't it curious how mayor fun-size, despite his uncritical love for every technology fad dreamed up in this city (stupid or otherwise), never thought to use the power of the internet to put his own agencies in order...