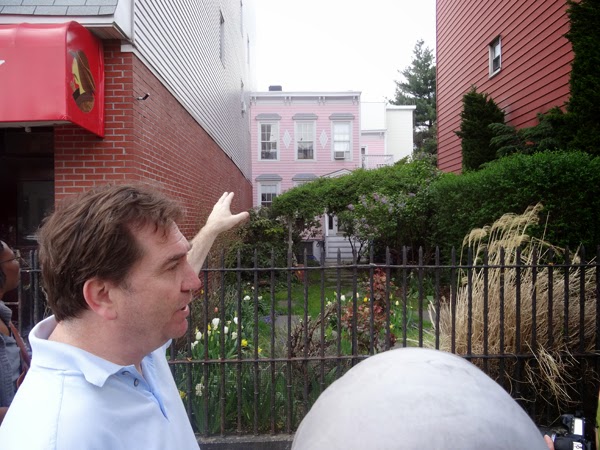 Some might recall that not terribly long ago I was contacted by a very nice fellow named Geoff. He is not only a Greenpoint resident and school teacher (!), but he calls north Brooklyn history his hobby and to this end he has a web site and is publishing a book. Upon his applying for and receiving a tour guide license, Geoff was kind enough to invite me on a tour! I had a wonderful time and learned a lot.

Darn, that's a cute old pink house setback from the street! I hope it doesn't meet the wrecking ball...

Interestingly, he does not appear to hold a Sightseeing Guide license.
Posted by Queens Crapper at 12:12 AM

Think a classic Brooklyn Brownstone was bulldozed to put up that pink house? Will that pink house meet the wrecking ball so a synagogue/asian church can go up there?

Wait a minute. Eichenbaum does for-profit tours and doesn't have a tour guide license? Isn't that a violation? And he was picked as Queens Borough Historian regardless?

and of the 5 borough historians guess who speaks the least about solid history and neighborhood preservation?

His sthick (and the reason he got the job over a host of more qualified candidates) is that he talks like a broken record the party line: the borough is little more than a construction site for vibrant diversity.

Is the "borough historian" a ceremonial position, or does Eichenbaum get paid for it?

it is just about the only position n the Green Book that has no pay.

Eichenbaum's politically inspired selections for that contest last yar on historic sites around the city as the reason that Queens did so poorly - not that the public don't care about their communities, its just they are always given a plate of crap to eat and they just would rather pass.