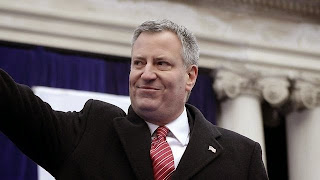 From the first moments of New York City Mayor Bill de Blasio's administration, when he initially declared his midnight swearing-in off limits to the media, he has established a record of frequently conducting public business in private, with dozens of events closed to the press.

In nearly five months in office, Mr. de Blasio barred the media from 53 events and limited access to 30 more, an Associated Press analysis of Mr. de Blasio's schedule shows. On a handful of days, his entire schedule was off limits. All told, more than 20% of his listed events were closed to the media.

Events in which reporters were notified of their existence but prevented from attending ranged from meetings with government figures such as the mayor of Seattle and Israel's minister of foreign affairs to sit-downs with the NBA commissioner, the Rev. Al Sharpton and the Russian band Pussy Riot.

Often, the mayor's photographer later published images from those so-called private meetings, meaning that an official image of the event is the only one that exists. It's a tactic President Barack Obama has also used while restricting access to events in the White House and around the world. Several news organizations, including the AP, refuse to distribute such handout images from Mr. Obama or Mr. de Blasio.

Mr. de Blasio, a populist Democrat who campaigned with promises of an open administration, said in a news conference in Brooklyn on Tuesday that he "believes deeply in transparency" and that his administration could do better.

"We believe there is a whole swath of information that needs to be available to the public and we need to continue to do a better job on that," he said. "There is a lot of day-to-day government business that is appropriately disclosable that we need to be better at."

Mr. de Blasio's spokesman noted that any limits imposed on reporters are largely due to logistics, not secrecy.

But some media watchdogs worry that the restrictions in New York reflect a larger trend of government officials limiting access to the media while getting their message out to constituents directly via Twitter, Facebook and their own websites.

"It's easier to manage the message if you leave the media out of it," said Hunter College professor Jamie Chandler. 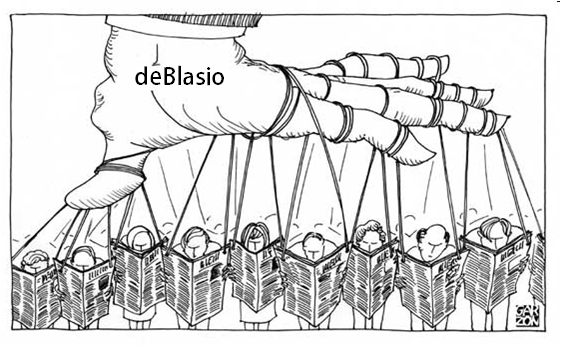 In working with politicians, I have discovered that our elected officials have actually put together a rigid and elaborate protocol to deal with each other.

It not only leaves the rest of us in the dark on how the process works, but actually is designed to undercut our rights for responsive government and our responsibility to be engaged within the process.

This is an example of that problem.

> Politician
> Work for you

Bring in the Feds - this guy stinks!

He and his wife seem like such sleazeball phonies!

Billy the boy mayor must have learned a lot about democracy on his trip to Nicaragua helping the communist Sandinista effort.

He then learned more about democracy on his honeymoon trip to Cuba.

He is now putting that knowledge to work in NYC at our expense.

Voter stupidity elected this political miscreant and now de Blasio is abusing the citizen's right to know. What municipal shenanigans is he enabling in these secret meetings closed to the public and the media?

Also, how does one start a mayoral recall effort in this city?

Soviet leaders always trumpeted the rule of the public, but then worked their own angles behind the curtain.

Break out the world's smallest fiddle: the adoring cabal of City Hall's media elite cannot get enough video bites and sound bites for their so-called "reporting".

DeBlasio just wants to cut out the filter and give you what he wants you to know: his version of the truth.

He's a communist. Why expect him to behave otherwise?

wow absolutely terrible and this man is our mayor!

Mayor Fugazio is feathering his own nest and does to want you to know the sordid details.

A politician managing his messages. Why is this news? Don't our State and City pols do the same thing?

Why is this a surprise to anyone? He's a communist. You all elected him. Enjoy.

the "MOSCOW ON THE HUDSON"politburo has now gotten control of the citizen's $$$$$$$.

Whats in your wallet now ?

is the Katyn Forest Massacre going to be simulated(POLAND 23000 patriots) and Finnish border annexation next (146 Finn/American commies slaughtered by Stalin. ?who will be the first purged in nyc ?

the COMMIES have already attempted to silence the Tax Enough Already patriots, with I.R.S. ,KGB tactics.

the blaz,zero vision mayor,zero tolerance for the press and the public's right to know and information.A former political strategist/manipulator that has hoodwinked his base.

this man is a creep and a coward,just like his lunatic reaction to his equally creepy wife's new york magazine piece.He was livid that he could not control the release of that article.And think about his delay about taking residence in gracie mansion.It happens to be near that garbage facility being built there.When the residents(mostly elderly and families)protested the blaz and bratton sent the cops there to slap the plasticuffs on them.It was no different than what you see in Russia or even venezuela.The Blaz,Mr. Progress also wants keep busting people with pot,maybe thinking that would be the only thing to keep his hipster daughter sober.

Speaking of Venezuela,the late Hugo Chavez had a similar iron grip on the media.He even had his own show,which I think was a variety show.

it's so out of control and surreal in a way now,that any theory and petty insult about his communist leanings and sandanista comparisons now seem justified and apt.The lines are not blurry anymore.

But the media is complicit,they wouldn't grill Mayor Fun Size enough on his now batshit plans to modernize every service in the city,and look what that cost us.And now they just bow down and take this shit just to get a story.Maybe they need to bone up on their constitutional rights.Or dig up some quotes from our founding fathers like this one from John Adams
"Let us dare to read, think, speak and write."(Sorry to requote,I know its up there on the right)

So all you press people find your balls or ovaries and don't let this big dumb son of a bitch intimidate you.throw those mayor approved questions out and improvise.Let him use the cops against you,lets see how that goes over.We may be in A police state,but its not fascist yet.unless you want it.