Let’s start with the Deserving – the dying wildlife.

Why are the turtles dying off in such large numbers at Bowne Park? Every day there seem to be 5 or 6 new ones – it’s extremely upsetting. If the city wishes to populate the pond with wildlife then that wildlife DESERVES AN ENVIRONMENT THAT DOESN’T KILL IT!!!!

Not only is the pond filled with scum, discarded fishing lines (a big problem – the turtles get entangled AND SUFFOCATE!!!) and fast-food trash, the large stones that comprise the edge are falling into the pond at an alarming rate and probably crushing even more turtles.

Here are some recent pictures: 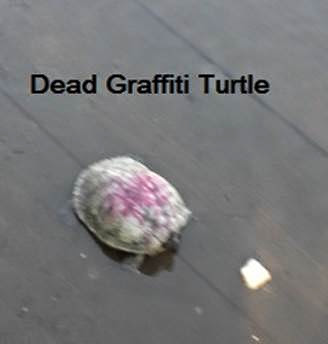 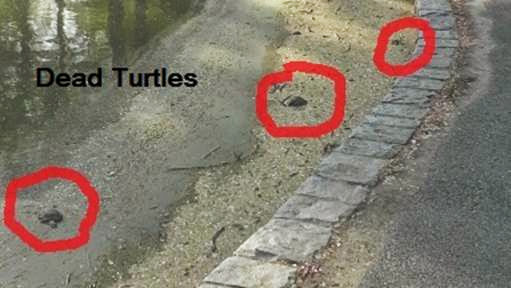 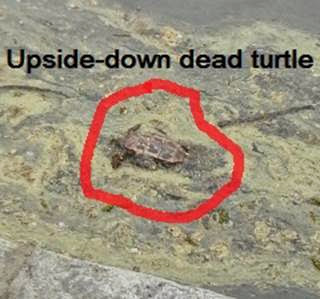 Don’t they deserve better? They Sure do!


Now – turning to the Undeserving at Bowne Park…

This picture below shows the condition of the bocce court area as it looks every morning!!! The Italians and Croatians that use it are total slobs!!!! They litter, argue constantly and openly gamble. The new crowd (mostly Croatian) is so unruly that many of the original Italian clique have departed!

What’s the matter with these pigs – won’t their wives let them smoke at home? Complimentary ashtrays have been provided multiple times only to be tossed in the trash. This is not the refuse of kids hanging out at the park at night – this is directly due to the bocce and card players – many of them esteemed seniors (hah!). 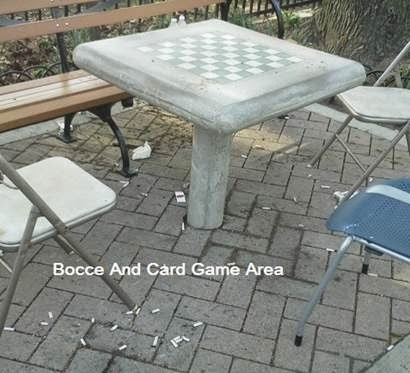 Did these people really deserve a $500K new court? Hell no!!!

The condition of Bowne Park is emblematic of the abuse and neglect that Queens has experienced over the last few decades – both by its inhabitants and our local government! Greatest city in the –world - more like filthy, broke-down Third World Ghetto!

We’re Queens – We Can’t Have Nice Things!
Posted by Queens Crapper at 12:57 AM

smoking is banned in NYC parks - yet I see the bocci area is littered with cigarette butts.

No Smoking and No Gambling allowed in city parks.

I've been complaining about the Bocce-galoops and the their smoking and gambling for years. The complaints go nowhere.

Now the dog walkers are starting to leave their dog's poop all over.

Do you think our new councilman might use his newly elected influence to do something about this "Jewel" of Queens parks?

Vallone has disappeared since assuming office. Empty promises from an empty suit.

Vallone has disappeared since assuming office. Empty promises from an empty suit.

well you just keep after the little pr*ck that's all. i tell ya people, if you all get in the habit of lampooning these knuckleheads every chance you get, not only will services skyrocket, but you will have fun at their expense.

and believe me, once you do, you will never stop. trust me.

Vallone has disappeared since assuming office. Empty promises from an empty suit.
_____

What? Vallone has been at every event since getting in office? I don't like the guy either, but dont lie about him not trying to some good. Its not the electeds, it's the agencies that dont do anything but collect pay checks.

You're right. Just where is Vallone? Kind of disappeared from the planet. Cashing his check at the bank?

Let's take this into our own hands, get the news and social media involved and demand answers. This stupid city wants more people here and bigger developments but they can't even take care of what they already have. When are these loser politicians actually going to give a damn about out city and communities why must it always be able money and building. I really think it's time to fight back. This city is way over it heads and it's not fair or right. Citizens must attack!

"Vallone has been at every event since getting in office?"

Getting your mug in the paper isn't the same as doing something.

These people understand nothing - one would think that Croatia must be a filthy, disgusting place - but I hear it's beautiful.

So the Croats come here, and like every other ethnic group in NYC, they shit all over America and then send all the money back home.

How does this country benefit by having them here?

can you prove that the turtles in the water are dead ?

do turtles ever die from old age ?

who are the owners of the folding chairs at the table.

did you have the bocci police check the identity cards of the players, for their nations citizenship ?

be careful ,you might be close to a HATE accusation.
that is a serious crime in this progressive city's government.

"...you might be close to a HATE accusation.
that is a serious crime in this progressive city's government"

It seems that telling the truth might also be a serious crime.

I called Vallone's office about the ongoing lack of anything going on at a Fort Totten. When the sycophant who answered the phone started telling me that Mr. Vallone wants the project finished etc etc. I stopped him and told him that I really don't care what Mr Vallone wants, I care about what my family and I want. I told him that Mr Vallone got in on his father's name, and he's a hack. Of course the phone guy got offended, as if he's a family member. I told him I know Vallone has a law practice which apparently supersedes his council position. He's a waste along with the rest of the city council. I did get the name of a Dorothy Landewski who is supposedly an assistant parks commissioner. Queens parks are being systematically neglected by incompetent callous political appointees

To the commenter that brings up the Hate crime nonsense -

First of all - there's no hate - I love the turtles and the park - I want the bocce players to keep their little fiefdom clean.

Go to the park and see the dead turtles yourself.

There are small and medium-sized ones floating dead in the water - they did not die of old age.

Regarding your question - are they really dead - oh yes, the one floating on its back is most certainly dead. Turtles don't float on top of the water, they live below unless they are sunning on the platform in the pond.

The bocce players are Croation and Italian. Go over and introduce yourself - there are no Asian, black or Latino players and very few American-born.

You can watch them chain-smoke and argue. The gambling is not as out in the open.

I know from speaking to several of the former Bowne Park players that a lot of those players have decamped to other courts because they don't care for the new crowd.

I know that they've thrown away multiple ashtrays. You can throw out their chairs and more crappy ones will appear the next day. There was even a leather sofa there for a day.

None of this is fabricated. This post is not about hate, it's factual documentation of two real-life situations - one tragic and one disgusting!

The sad part is that, at the end of the day, the humans get leave their mess and go to their nice, clean homes while the turtles are trapped in their toxic environment slowly dying!

So don't threaten people with hate crime accusations - go to the park and pick up some garbage!

Undoubtedly the water's toxic and a very poor environment for the turtles---or anything else. Have the fish already died? If so the turtles have little to eat. I don't think the vegetation can sustain them. Compounding the problem are people---well-intentioned---who release pet-shop turtles or unwanted pets into the pond, introducing disease. That too could cause a die-off. If this pond were a business-place they'd be charged with neglect and cruelty, but the city always manages toskirt it's own laws.

The only reason that it's all Croatians left on the court is simple: winner stays on

Jeez, the Italians, the Croatians...you'd better be careful, the Albanians might get insulted.

Paulie must have celebrated his election by getting a Dodge Charger, since that's what I've seen him driving recently. I think he used to drive a Mustang.

Anonymous said...
Paulie must have celebrated his election by getting a Dodge Charger, since that's what I've seen him driving recently. I think he used to drive a Mustang.