The total transformation of a community 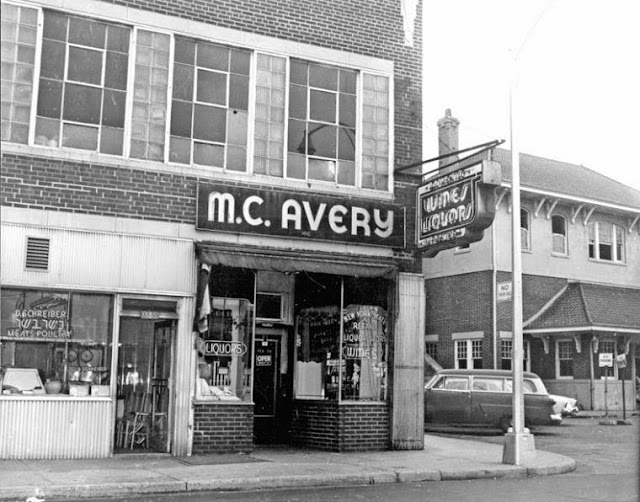 In October 1965 a liberalized immigration law known as the Hart-Celler Act was passed allowing immigrants to come to America and bring family along later without quota restrictions. Opponents of the bill said immigration would get out of hand and engulf and change communities overnight. Flushing was one such neighborhood whose identity was changed and lost overnight as predicted.

In the early 20th century, 40th Road was a block of handyman shops. Rent was cheaper here than on Main Street. It you needed a locksmith, plumber, printer or even a quick haircut, 40th Street was where you would go for a good deal and fair prices.

Next door, right on the corner with Main Street, was the Hy-Heat Coal Co. When coal went out of favor as a fuel, the site became became the home of the M.C. Avery liquor store. That was another neighborhood staple. In 1962 it became Gem Liquor, which continued to operate there until 1987.

Today 40th Road is of course filled with Asian-American shops, with most signs not even written in English.

Many people who come to America have already studied our history. Perhaps the Bowne House, a symbol of freedom of religion located a short distance away, is one reason this neighborhood was chosen as the favorite place to be for one wave of immigrants who came here.

I sincerely doubt that was the reason. Actually I know it wasn't a reason at all. Think tweeding.
Posted by Queens Crapper at 12:19 AM

I think it was because of the seven train being there. That is my guess why they all moved there. I'm sure many of them could not drive. I wish main street looked different, even in the 80s, I remember going to Alexanders over there and it was a million times different. I remember that there was a consumers along northern Blvd as well. This whole area has changed, and not for the better.

I lived in Flushing 60 years - born and raised here - Main Street was a DUMP in the 70s - vacant stores - prostitutes under the clock across from Woolworths. The Asians upgraded the place. It's outcrowded - that cannot be denied - but, we are LUCKY it didn't go the OVER way - i.e. the Prince Street way.

Thank you, anonymous! That's exactly what I was referring to. The asshole electeds in Flushing didn't want blacks moving in, so they pandered to Asians.

Dumb move. Most black communities these days are becoming gentrified as hell with soaring property values. That's not going to happen in Flushing.

Which "asshole electeds in Flushing didn't want blacks moving in, so they pandered to Asians?" Can you provide names?

"In the early 20th century, 40th Road was a block of handyman shops. Rent was cheaper here than on Main Street. It you needed a locksmith, plumber, printer or even a quick haircut, 40th Street was where you would go for a good deal and fair prices."

Secondly.
Dumb move. Most black communities these days are becoming gentrified as hell with soaring property values. That's not going to happen in Flushing.

Black communities gentrified? South Jamaica runs along the same latitude coordinates as Flushing. Show me anywhere there is gentrification in South Jamaica.

America has just been given away. I blame the Federal Reserve and their cheap money policies. Its a race to the bottom.

The concentration of Chinese immigrants in Chinatown was threatening to overwhelm all of Manhattan below Union Square.

Distributing the Chinese among the Bronx, Brooklyn, and Queens was a priority. I cannot think of a reason why Flushing was boosted over any other mass transit-accessible neighborhood of Queens.

"I cannot think of a reason why Flushing was boosted over any other mass transit-accessible neighborhood of Queens."

It was pushed for by the pols and residents living in the area at the time. See comment #2 for an idea of the mentality.

"Show me anywhere there is gentrification in South Jamaica."

I said MOST communities. South Jamaica does not have good access to transportation, so it's not being gentrified. Jamaica proper is. As are all the black neighborhoods in Brooklyn near a subway. Did anyone ever think Bed-Stuy would see an influx of young white folks?

With all the problems our communities face, this is what our elected spend their time on: tweeding.

I would argue that asians moving into any area is a form of gentrification. They bring some development as well as increased property values.

Not all development is good, particularly the type that Asians bring. When you're tearing down an historic house to put up a multifamily shitbox, it brings down the neighborhood. In traditionally clean, well-kept communities, there has been an avalanche of Asian teardowns replaced with crap.

The myth that Flushing was a run-down slum in the 1970s and 80s continues. Luckily, I have this post to refresh your warped memories.

The M.C. Avery on the sign, any relation to Avery Avenue?

25 % of blacks, 20% of Hispanics and 18% of Italians are drop outs. One out of seven blacks, one out of ten Hispanics and one out of twelve Italians have HIV AIDS. Who is ruining our society ? Who is making our workforce incompetent? Not the Asians!

re: road or street.

Road, apparently. The paper fixed it.

Anonymous 16....you really think Asians don't bring in their own sets of crime? I have seen Asians getting arrested for many prostitution rings, welfare fraud, illegal hotels, illegal goods being sold, no sellers licenses, drug busts. The Asian people have their problems....they are definitely far from perfect. Didn't you just hear about the Chinese man who just killed his sister? They too have many criminals. Asians also carry disease too. Do you know how many Asians have tb? Or how many of them have aids? Look up aids epidemic in China and you will see. Asian people are not immune from carrying diseases.

I have a challenge for anyone, show me a picture of a new one or two family house in Queens that was built after a teardown by an Asian owner-occupant that is beautiful or in keeping with the appearance of much older adjacent buildings. I know this is subjective, but let's have an example. It should be too hard to find.

When discussing Asian immigration, it's important to not lump all Chinese into a single basket.
There was a great deal of immigration from Taiwan in the 50's and 60's. They wanted freedom and economic opportunity. And they took advantage of it, many of the top students at my high school (Brooklyn Tech) had parents from Taiwan. And their parents instilled in them a great work ethic and appreciation of the USA.
The more recent immigrants are from the PRC. They are used to having the government run everything. They expect to be on the dole. They also have little appreciation of the USA. In many cases they were taught we are capitalistic pigs. ( See Mao's little red book)

The Asian immigrants in the 1970s and 1980s were a lot different than the ones coming here now as well.

when all is said and done. i bet you would agree, if you cant have whites move in you would settle for asians. and thats the truth.

No. The truth is that most people would tolerate whomever decides to move in so long as they respect the community.

The more recent immigrants are from the PRC. They are used to having the government run everything. They expect to be on the dole.

The outside money, the lemming like response of Asians to the polls, the union muscle dictated by union bosses, and the utter indifference to politics by the typical Queens resident (hipster as well as south European peasant) has sustained the death spiral in Queens for the past generation as well as foreseeable future, and why any opportunity to break out of it with people like Tony will be trumped every time by a Liu.

So this post rolled off the front page without anyone responding:

...show me a picture of a new one or two family house in Queens that was built after a teardown by an Asian owner-occupant that is beautiful or in keeping with the appearance of much older adjacent buildings.

I will repost this challenge again when someone denies that the new houses are transforming Queens.

Everyone seems to be focusing on Asian culture, and no, I'm not Asian, hispanic, or black, for that matter. I believe that poverty,ignorance, and greed play a much larger role in downtown's Flushing deleterious decline. Do you think downtown Flushing would be any better if it were brimming with white American, trailer-park types rather than Asians?