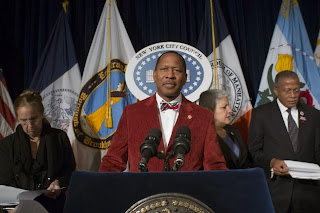 Disturbed by a recent spike in crime, the City Council Black, Latino and Asian Caucus pleaded with the mayor Monday to add 1,000 more cops to the NYPD.

Shootings have gone up 7% in the city through this week as compared with the same period last year, with much of the crime concentrated in neighborhoods with a large number of minorities — including the 47th Precinct in the northern Bronx.

None of the Council members blamed the increases on the reduction of stop-and-frisk, a crime-fighting method that all opposed.
Posted by Queens Crapper at 12:36 AM

There would be more police presence in the City if the cops, as City employees, were not exempted from having to live in the City.

So all of these minority groups that bitched about police harassment and stop and frisk now want more cops? Pick one. You can't be anti police one day and pro police the next. All these groups were quite clear they did not like the police harassing their "youth". Now that they are shooting each other nonstop you want the police?

Bring back Stop and Frisk you fools!

You made your bed, now sleep in it...and take cover.

No they don't, they want to seen as ASKING for more cops. It's politics folks wake up

stop and frisk never worked,the cops rounded up innocent people and a bunch of scumbags wound up running free.

combine that with manipulating the crime stats,the muslim/terrorist task force and sending cops to film and tv show productions and you got what we have today.

so let's be careful out there

We need federal cops to protect us from the shenanigans of the city council.

They need to be stopped and frisked too.

"Is that a bribe in your pocket or are you just glad to see me, councilman"?

How about fewer cops hiding all over Queens and giving out traffic tickets?

What a waste of cops!

During the winter I witnessed an accident in Whitestone. No one was hurt but the cars were pretty banged up.

I hailed a police car on Francis Lewis Blvd. and directed them to the accident site which was TWO blocks away. They responded by saying that they could do nothing until the call came over.

I knew that this was BS and told them so. The cop in the passenger seat got real snotty and threatened me by asking for my name and address. I asked for their badge numbers and they refused to give them and drove away laughing.

Later I saw the same cop car parked by McDonald's on Francis Lewis and Willets Point talking with some young girls.

These idiots give cops a bad name.

I will be Captain Obvious on this one: When there was stop-and-frisk, it discouraged people from carrying illegal weapons, and without those weapons on their person - fewer shootings of passion or opportunity. They feared being arrested.

Without stop and frisk, they carry illegal weapons without any fear in front of cops.

The bad guys have become "The Untouchables" in other words.

sorry captain obvious.but it just made criminals more cautious.the percentages don't lie and it was unconstitutional.

they no longer have fear because,well,look at the last story from whitestone.The cops have basically become automatons that will only respond when they get the call from 911(And considering the Blaz's recent decision suspending the upgrade,you better buy a kevlar vest).They can't think for themselves anymore,or even want to.

it's why the system is infinitely dysfunctional.its meant to be.

Enforce laws currently on the books by arresting and deporting illegals. Especially the drunks and gang members. The will never amount to ANYTHING good.

Its going to get worse. Obama freed over 36,000 illegals including murderers and perverts all heading to New York City for all the free stuff & sanctuary from the feds, INS

'The cops have basically become automatons that will only respond when they get the call from 911(And considering the Blaz's recent decision suspending the upgrade,you better buy a kevlar vest).They can't think for themselves anymore,or even want to.'

That's why even with higher per capita staffing levels than anywhere else in the country except Washington DC much of the city is still in anarchy. Too many lazy bums in the union. Time to clean house there.

Anonymous stated ". Obama freed over 36,000 illegals including murderers and perverts all heading to New York City for all the free stuff & sanctuary from the feds, INS"

Just where exactly did you get this information which is not true. This is exactly the type of news that Fox does, just say it without one iota of facts and assume it to be true.

Boy we have gotten dumber and dumber as a society in every way possible.

Those 36,000 illegals, ANON mention and the number is actually higher was released by The Center for Immigration Studies, which is a very conservative think tank group (not sure who is the backer behind it, hell it could be one of the Koch Brothers who have several think tanks), so I question their motives first. Also no where does it state exactly what the crimes were (you stated murders and perverts, did not know that being a pervert was a criminal act, but there is no mention of the exact crimes. What exactly were the crimes, not having ID, holding some pot in one's pockets, were they non-violent crimes, it is not very clear.

Don't get me wrong there is an immigrant issue, but to toss it on Obama is bullshit. More immigrants came illegally into this country during previous presidents, especially Bush's watch.

This smells too much of anti-Obama, which smells further of anti-black.

Are you kidding Jamaica Joe ?
This is not a joke its fact and the breakdown is here as well 100s of websights. I'm my opinion the president has ether gone crazy or is with some "outside influence" to destroy the country. Why you democrats still love and adore this domestic terrorist out to destroy YOU TOO I have no idea
--Read: